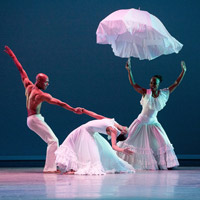 Less than 24 hours after Alvin Ailey’s opening night performance at the Music Center on Friday, company members were teaching hundreds of people the dance steps to the troupe’s most significant work, Revelations. As part of the Active Arts at the Music Center program called “A Taste of Dance,” L.A. native Matthew Rushing, Renee Robinson, Hope Boykin, and Guillermo Asca took to four makeshift dance floors set up on the Music Center’s plaza, gently instructing their students who’d paid just $1 per 20-minute group lesson.

Here was a chance to watch the dancers up close, and no experience was necessary to learn from some of the best in the business. But most telling was this: Saturday’s daylong event captured what has made Alvin Ailey endure for 50 years—a deep connection to its audience. Robinson said people came up to her, remembering having seen Revelations decades ago. She explained that Alvin Ailey spent his early years in Los Angeles, and those roots remain. Rushing added, “Everyone has been very responsive. Dance came from the people, and here we’re delivering it back.”

The company is in town for a ten-performance run through Sunday, offering three different programs, each of which ends with Revelations. See performance clips here. This is Judith Jamison’s final season as artistic director (Robert Battle takes over) as well as Rushing’s final series of performances (he’ll now focus on his role as the company’s rehearsal director).

Friday’s program opened with Anointed, choreographed by Christopher L. Huggins with music by Moby and Sean Clements. Linda Celeste Sims was exquisite, every facet of her body extended, every movement polished. She carried the ensemble piece as it progressed through three parts. In The Evolution of a Secured Feminine, choreographed by Camille A. Brown with music sung by Ella Fitzgerald, Betty Carter, and Nancy Wilson, Rachael McLaren presented an emotional solo dramatizing her longing for a cheating lover. Humor, pantomime, and quick footwork combined to make this work both entertaining and heartfelt. At the other end of the gender spectrum, The Hunt, choreographed by Robert Battle with music by Les Tambours du Bronx, was a testosterone-driven set in which six men reenacted the violence, power, and thunderous nature of the hunt.

Revelations, choreographed by Ailey in 1960, concluded the evening. It was preceded by a short film by Emmy winner Judy Kinberg—including interviews with Ailey and Judith Jamison and historical footage—explaining the meaning behind the work, which has been called a “modern masterpiece” and an “American classic.” It tells the story of the African American experience, touching on the themes of sorrow and repression and shifting, after several sequences, to joy and triumph. “I Been ’Buked,” “Wade in the Water,” and “Rocka My Soul in the Bosom of Abraham,” were among the most memorable segments—performed with both soulfulness and spirit. Revelations reminds you “what it’s like to be human,” Jamison had said in the film clip. The company proved that point, and then some.

Nasha Thomas-Schmitt, co-director of Alvin Ailey Arts in Education, leads participants on the Music Center Plaza at “A Taste of Dance.” Photograph by John McCoy