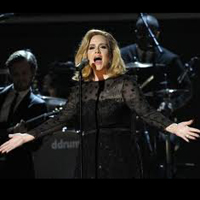 Six weeks ago British soul singer Adele was diagnosed with laryngitis and forced to postpone her sold-out concerts at the Greek Theatre and the Palladium along with other stops along her North American tour. Well, Adele made it to Los Angeles last night, and the wait—during which hits off the singer-songwriter’s 2010 release, 21, continued to top the charts—was worth it.

Adele opened her set out of sight, singing the opening lines of “Hometown Glory” from behind a thin, dark curtain. When it dropped to the stage, revealing the singer in black sequins and her signature throwback do, the crowd went wild. Things got livelier and, to borrow a term from “Rolling in the Deep,” Adele’s current hit, deeper from there.

Backed by a five-piece band and two singers on a lamp-lit stage, Adele blew through record-perfect renditions of “I’ll Be Waiting,” “Turning Tables,” and “Don’t You Remember,” then transitioned effortlessly between knock-down hits like “Rumor Has It” and gorgeous, simmering versions of slower numbers like “Feel My Love,” and “Love Song.” Her voice broke once, during “One and Only,” but it didn’t matter—by then even the superfan belting out lyrics from the row behind me was hushed, mesmerized by Adele’s range.

Between songs, Adele had the lights turned on so she could see the audience, joked about her hair (half of which was a wig), and chatted, sometimes cracking herself up, about her mom, her friends back in London, and the ex-boyfriend who inspired all but one of the songs on 21.

She also reflected on her career—afterall it was just four years ago that Adele performed at the Hotel Café—and remembered Amy Winehouse, who she credits as an inspiration.

It was in the last six weeks that Winehouse passed away, and as I listened to Adele introduce “Take it All,” a love song she wrote for her ex shortly before he ended their relationship, I thought back on this nymag.com article by Nitsuh Abebe about the myth surrounding Winehouse’s life and death. The post moved and impressed me when I read it in July, but I found one line, an aside about Adele’s recent success being “helped along by some people’s unconscious, and incredibly condescending, assumption that it must be very sad and tragic for her not to be skinny,” hard to swallow.

Adele explained the genesis of “Take it All,” but she didn’t let the audience feel sorry for her. “Oh no, no, no,” she laughed when the crowd booed her ex, “I’m playing at the Greek Theatre! Where the fuck is he?”

I don’t think anyone, consciously or unconsciously, should assume it must be very sad to be Adele these days. Adele certainly doesn’t.