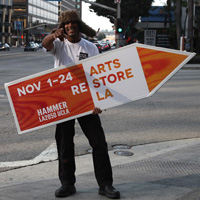 This weekend, Arts Restore: LA kicked off in Westwood, repopulating several of the UCLA-adjacent neighborhood’s vacant storefronts with pop-up boutiques peddling locally-made wares and art installations, all of which will coexist for a month alongside the area’s established stores. The pop-ups, which will occupy the storefronts until November 24, were funded in part by a LA2050 grant from the Goldhirsh Foundation in partnership with the Hammer Museum. As laid out in their grant proposal, it’s an ambitious proposal: rethinking the commercial strategy of an area that has the highest retail vacancy in West Los Angeles. 30 of the 78 storefronts are without tenants, so project organizers approached business owners and asked them to donate the space.

The temporary initiative showcases a diverse roster of artists and craft people including textile artist Tanya Aguiñiga, jewelry designer Hannah Keefe, and ceramicist Heather Levine. Collective Fallen Fruit has created a space plastered with outrageous wallpaper that sells commissioned (and often hilarious) artwork focusing on produce. Bettina Korek of ForYourArt has created a gallery space that reanimates some of her organization’s greatest hits. Some indie designers have moved their operations into one of these the spaces; temporarily relocating from Highland Park, letter-pressing studio The Iron Curtain Press will produce products on-site while offering classes on their craft.

The event itself has an East-goes-West vibe, as artists and artisans from North East Los Angeles and surrounding areas displayed their works to a seemingly new audience. If it succeeds, the program could be a prototype that bridges insular communities separated by moats of traffic. Or perhaps it’s a try-before-you-buy enticement for crafts people who sell online and in pop-ups to invest in a Westside brick-and-mortar location.

While Westwood is hardly one of Los Angeles’ most underserved neighborhood, it was a good kickoff for Arts Restore: LA, making it easy to imagine this same project popping up in other neighborhoods. (We’re thinking Inglewood, Lincoln Heights, and Van Nuys.)  Like Doug Aitken’s recent Station to Station event, these kinds of happenings encourage Angelenos to veer away from their tried and true urban paths to encounter different–sometimes forgotten–parts of our city.