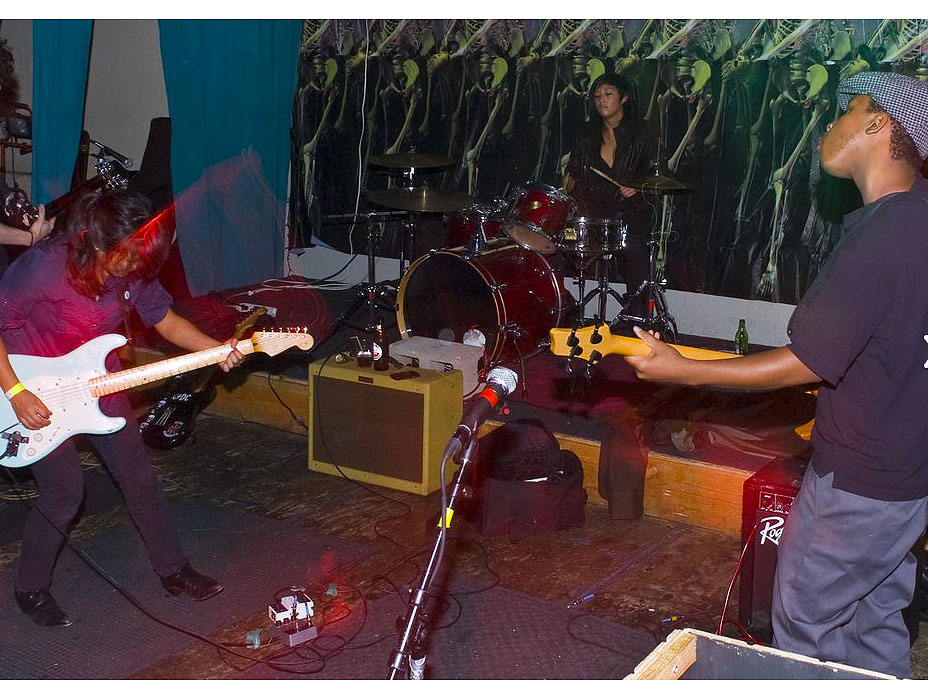 The April issue of Los Angeles features a story on 1933 Group’s Highland Park Bowl, which opened where the longstanding Mr. T’s Bowl used to be. Musician and booker Mike TV discusses the old venue’s gritty charm.

“Mr. T’s was like partying in your grandparents’ living room. I mean, we continued to smoke in the place maybe two, two and-a-half years after the smoking ban. It was just sheer anarchy. And Arlo, the sound guy, he set the tone for the place, at least in terms of the way that the bands were treated. He was such a friendly, loving, affable guy. When we started, I kind of took my cue from him and things grew from there.

There was a band called Otto [later renamed after Arlo, after the sound engineer], and my band, and another band called Holliston Stops. We were all kind of new and couldn’t find places to play. I proposed that we find some crappy venue and ask to take over one of their worst nights. They were like “Every week, that’s ridiculous! There’s no way we can get people out.” My hope was that we could find some venue that would appreciate the business that we brought, even if it was just the bands. We reached out to Arlo and asked to play their worst night every week for a month. We wanted to keep it free so there was no impediment to getting people in the door and keeping them there. [The owner] Joe T. was notorious for keeping his prices ridiculously low; this was ’98 and you could still get a $1 or $1.25 domestic beer.

We played Tuesdays and just had a great time. The first couple of shows, all our girlfriends were there and a handful of friends. By the end of the first month, it was just the bandmates, but we were drinking a lot. We spent $400-500 with just with 12 of us, literally on $1.25 domestic beers. I reached out to Joe and was like “Would you mind if we were to keep going?” and he said “Sure. You don’t bring a lot of people, but you do drink a lot.” It was sort of a strange compliment, but it worked.

For that first year, it was just the bands playing for each other. Slowly but surely, we started finding other bands and it just became a home base for this little kernel of a cool indie rock scene. Maybe about month eleven, we started getting some regulars. Eventually, we hit a point where we had so many people in the place that you couldn’t fit everybody.

There were maybe 20 regulars who were all retirees living on social security I think. They would show up at Mr. T’s at like six in the morning and start drinking and go all day. That was Joe’s bread and butter. He spent decades putting that group together—like, really cultivating it. Joe was a really sweetheart of a man. He was always someone you could reach out to if you couldn’t make rent. He was a soft touch, you know? And everybody paid him back. It felt like a slightly dysfunctional—well not slightly—significantly dysfunctional family.

We wanted to be free. We didn’t want any egos, so even if you were one the founding bands, often you would open or close a show. We ended up doing a five-band format so it was about 35 minutes per set, unless it was a special occasion. Bands were on and off really quickly so everyone showcased their best stuff. There were a lot of bands that developed pretty decent followings, at least locally.

I do think that you have to have that confluence of factors. It’s really funny because I tried putting [scenes like this] together multiple times since then, with varying degrees of success, but it has to have cheap drinks, and be a place where people are comfortable hanging out. There can’t be any negative experiences. You can’t have a shitty set; you can’t have a shitty doorman; you can’t have a shitty bartender. Everybody has to be friendly. It has to be this weird alchemical mix, but if you get it right, and the venue has the endurance to allow it to grow, then good things happen.”