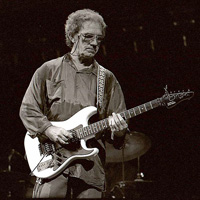 There were a lot of sad music fans this weekend when they heard about the death of J.J. Cale. There is irony in the multiple texts and Facebook posts that went around: Oklahoma-born John Weldon Cale would not have wanted the attention. The list of his admirers includes a lot of people I know, and many I don’t—including, among many others, Eric Clapton, Tom Petty, Neil Young, the surviving members of Lynyrd Skynrd, and Beck.

Cale was a terrific songwriter, a stellar guitar player, and a beloved, easygoing guy who just wanted to do his thing. His mellow, bluesy groove defined the Tulsa sound and came to Eric Clapton’s attention in the early 1970s. Cale’s particular blend of rock, folk, and Americana informed Clapton’s blues-tinged aesthetic and in 1970 the British rocker scored a hit with his cover of “After Midnight,” Cale’s sly, smoky ode to hedonism. Seven years later, Clapton scored another hit with a redo of Cale’s song “Cocaine,” perhaps the ultimate Top 40 paean to any drug. Waylon Jennings covered “Clyde,” Lynyrd Skynyrd covered “Call Me the Breeze,” and Captain Beefheart covered “Same Old Blues.” To Cale, this all came as a pleasant surprise—one that set him up financially for the rest of his life.

I already knew most of these songs but in college I discovered the man behind them. I had a cassette someone must have made me (possibly because my parents were from Tulsa) that I played to death. It was a mix of songs from his first few albums, and it struck me that Cale’s versions of the hits were just as special as the covers. He had such a distinctive, easy groove. That cassette turned me on to his lesser-known tunes, showing off a songwriting style that seemed effortless. For Cale, simplicity was key. He was a romantic; I wanted to meet the man who felt protective toward the “Sensitive Kind” of girl or the guy who songs to the “Cajun Moon” about the girl who got away.

He shunned the spotlight, didn’t play out a lot, didn’t give interviews, only had one almost-hit (“Crazy Mama”) but I defy you to find a current rock, folk or Americana fan who didn’t know his name, his craft, and his legacy. RIP J.J. Cale.