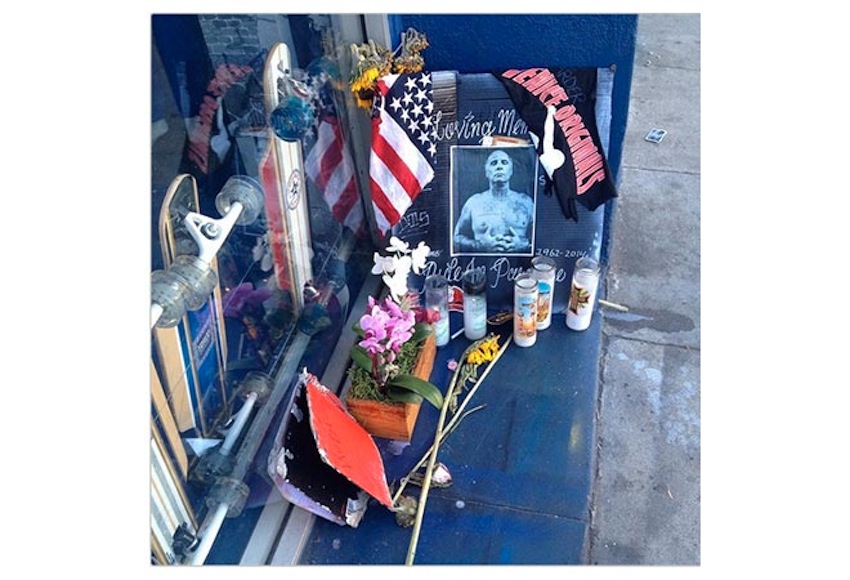 The scene outside of Venice Originals (photograph by Jason Martinez)

Do you remember when people were riding skateboards stiff-kneed and nearly upright, as though they were rolling through a dinner party on a ceramic platter with wheels? No, you probably don’t. That’s because in the mid-’70s a bunch of misfits in Venice, California turned a genteel pastime into an adrenaline-fueled cruise through abandoned swimming pools and empty playgrounds.

They were known as the Zephyr Competition Team and they rode hard, skating loose-limbed and low-to-the-ground, borrowing moves they had seen surfers execute while riding Southern California’s waves. No one was more of a natural than Jay Adams, the youngest, most explosive member of the team. Adams is featured in both the documentary Dogtown and Z-Boys and the feature film Lords of Dogtown.

This weekend news broke that Adams had died at age 53 of a heart attack while on a surf vacation in Mexico. It’s not an overstatement to say that he helped revolutionize skateboarding. Fellow Z-boy (turned filmmaker) Stacy Peralta described him as “the archetype of modern-day skateboarding.” Born in Santa Monica, Adams didn’t live an exemplary life. He struggled with drug addiction. He landed in jail. In Hollywood he and his pals once picked a fight with a man they ended up stomping to death. Whatever he did in the rest of his life, he had an outsize impact on skateboarding and on fans around the world but nowhere was his impact felt more deeply than on his home turf.

Goodbye Jay Adams. Thank you for inspiring us to get vertical and to keep pushing the limits of what is possible. pic.twitter.com/ezBW7ZwdtI

RIP to a legend and my hero Jay Adams. #RIPJayAdams pic.twitter.com/4YV845VpbA