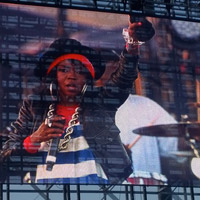 I don’t have the energy to lie: I’m tired. Wandering for—okay, spending— three days on your feet on horse-tread fields in the blazing heat of the California desert will do that to you—that is, if the hipster posturing of 80,000 indie music fans at the Coachella Valley Music & Arts Festival doesn’t kill you first.

The 12-year-old event, sponsored this year in part by Sony, opened on Friday with headliners Kings of Leon and performances by Cut Copy, Sleigh Bells, The Chemical Brothers, and Warpaint. By the time Cee Lo Green took the main stage at 5:20—half-hour late because “we just landed”—for an abbreviated 20-minute set, 25 bands had already blared over the Empire Polo Fields. Cee Lo had everyone raise a middle finger, then sang “Fuck You” before someone backstage pulled the plug on him mid-song. It seemed almost poetic that Lauryn Hill, who goes by “Ms. Lauryn Hill” nowadays and earned herself a reputation for tardiness back in her “Lauryn Hill” days, followed. And yet, up on stage, sweat dripping under her wool cap and leather jacket after her band and backup singers gathered for a pre-set prayer, Hill came to life. She raced through muddled renditions of hits like “Lost Ones” and “Doo Wop” from her debut (and last) solo album, The Miseducation of Lauryn Hill, then slowed things down for “Ex-Factor” and “Ready or Not.” When Hill sang—really sang—her voice was so soulful and strong it reminded me why she and the Fugees touched so many demographics so quickly when they released The Score, one of the first albums I ever purchased with my own money, in 1996, and how upset I was when they broke up (for the first time) just one year later.

It was dryer and hotter—105 degrees according to the internal thermostat of my car—when the Radio Dept. kicked off a mellow show in the Gobi tent on Saturday. The band swayed onstage while a girl dressed in a skirt and bikini sprayed the half-naked strangers around her with a water bottle. Out in the field, Erykah Badu drew a crowd as the sun began to drop. She thanked the audience for “letting me have my therapy up here today,” then wailed out “Appletree” and “Soldier” before saying goodbye so Arcade Fire could close out the night with a triumphant set that ended in an LED-lit balloon drop.

The air was thicker, the traffic deeper, and the line of people scanning wristbands at the entrances slower on Sunday. Inside, more couples curled up on the grass. I put my hood on and laid down, my eyelids heavy, while Death From Above 1979 scorched their instruments on the main stage.

And then, there was a miracle in the desert. A wind picked up, the temperature dropped, and the field started to buzz. By the time The National played the first chords of “Bloodbuzz Ohio,” the crowd had the energy to sing along. Matt Berninger led the audience through amped-up versions of “Afraid of Everyone” and “Fake Empire,” then welcomed Justin Vernon to the stage to close the set with “Terrible Love.”

It wasn’t the only show Vernon crashed—I remember him performing with Kanye West, who went on after the Strokes and gave not one, but three “acts” his all until it was suddenly Monday morning, too. At least I think that’s what happened. It’s all starting to feel like some long, hot, musical dream.