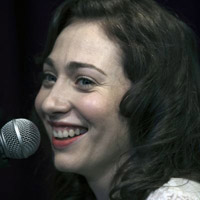 Sadly, we missed Regina Spektor’s Tuesday night show at the Greek, but we were lucky enough to see her play a small-ish, private show last night. (200 to 250 people is what passes for intimate here in L.A.) The venue was producer Bob Clearmountain’s recording studio in Santa Monica. The impetus was a KCRW recording session.

Backed by a three-piece band of cello, keyboard, and drums (rounded out by her husband Jack Dishel for “Call Them Brothers”), Spektor took the stage shortly after 8 p.m. and played a nine-song set. Highlights included the fanciful “All The Rowboats,” a story of museum masterpieces at night, and the closer, “The Party,” with its ebullient lyrics: “You’re like a party/ Somebody threw me/ You taste like birthday/ You look like New Year’s.” As deejay Anne Litt pointed out during the post-show Q&A, even Spektor’s happiest tunes feel a bit melancholy and even her darkest songs have a hopeful strain. Trying to explain the mix of fatalism and optimism, Spektor spoke of the immigrant conscious, specifically the Russian Jewish one. “You never know when they’re going to pogrom you,” she said with a laugh. The previous night was the 23rd aniversary of Spektor’s arrival in the United States from the Soviet Union.

The show will air next month on Morning Becomes Eclectic.