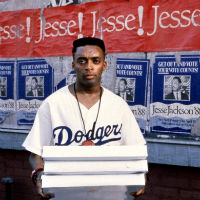 The week’s best writing about movies includes tales of subtitlers, joke shillers, and filmmakers who reveal what they wish they’d known before they started shooting.

Yellow Brick Mess by Jordan Zakarin at The Wrap
Remember that Legends of Oz: Dorothy’s Return movie that came out last month and sunk immediately? Investors lost more than $100 million dollars on the animated flop yet the producers walked away with overflowing pockets. Zakarin smells a scam, and his investigation is juicy fun for anyone interested in Hollywood financial shenanigans.

Do the Right Thing Turns 25 by Michelle Orange at The Village Voice
It’s the silver anniversary of a landmark American movie, and the BAMCinématek in Brooklyn is running a Spike Lee retrospective to celebrate. We in L.A. can’t take advantage of such a great series, but we can read how Orange uses it as a springboard to explore recurrent themes in Lee’s filmography. It will make you want to rewatch all his films and look up the ones you haven’t seen before.

11 Things LAFF Filmmakers Wish Someone Had Told Them BEFORE They Started Shooting by Taylor Lindsay at Indiewire
One more bit from the Los Angeles Film Festival: Indiewire sent out a questionnaire to directors whose films were playing the fest and compiled the best answers. Our personal favorite is Nathan Silver’s answer.

A Freelance Career, Found in Translation by Nicolas Rapold at The New York Times
Have you ever watched a subtitled film and wondered about the people who translate the dialogue into English? Who does the same for our movies when they’re released in non-English-speaking countries? Rapold found and spoke with a few subtitlers, all of whom have worked on movies you’ve heard of but who mostly toil in anonymity. Their work comes with its own fascinating set of challenges.

How to Write Jokes for the Academy Awards by Mike Sacks at Vulture
Every year, celebrities make painfully corny jokes as they present awards at the Oscars. It’s part of the ceremony’s charm. Bruce Vilanch is the reigning king of these groaners, having written for the show for 25 years, 14 of them as the lead writer. He sits down with Sacks to talk about the process of scripting the biggest night in showbiz.

Charles Brackett, Billy Wilder, and the rise and fall of Hollywood’s happiest couple by Matthew Dessem at The Dissolve
The Dissolve’s movie of the week is Ace in the Hole, a pitch black 1951 satire of the media. Directed by Billy Wilder, it was the first film he made after splitting from Charles Brackett, his longtime writing partner. Dessem tracks the arc of Wilder and Brackett’s partnership by looking at their diaries, which give no concrete reasons for the separation, leaving him to extrapolate and speculate.