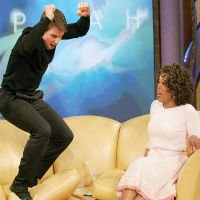 How YouTube and Internet Journalism Destroyed Tom Cruise, Our Last Real Movie Star by Amy Nicholson at LA Weekly
Remember how Tom Cruise broke the internet by jumping up and down on Oprah’s couch? We all do. There’s only one problem. It didn’t happen. But YouTube and Perez Hilton made you think it did. Nicholson dives into how Cruise, who once controlled his public image with military rigor, was blindsided by new media. Now that Cruise, who once showed real creative initiative, has been branded “crazy,” he sticks to safe, mainstream projects. It’s a sad tale.

“Don’t be an a–hole,” an interview with Richard Linklater by Matt Zoller Seitz at RogerEbert.com
The strangest movie-related news to come out recently was that convicted murderer Bernie Tiede, the subject of director Richard Linklater’s 2011 movie Bernie, had been released from jail on one condition: that he live with Linklater. This interview with Linklater starts by talking about the filmmaker’s masterful new movie, Boyhood, but turns to what it’s like to have a convicted killer living above your garage.

Samurai Robots, Nude Robin, and Monster Love: The Batman-Godzilla Movie That Could Have Been by Matt Patches at Grantland
In 2015, Batman will battle Superman. This summer, Godzilla stomps through theaters. But back in the 1960s, Adam West’s Batman nearly fought Godzilla. Read this amazing summary of the aborted film’s treatment and you’ll likely be convinced that Batman Meets Godzilla is one of the greatest movies never made.

Michael Bay: Futurist by John D’Amico at Smug Film
Few critics have nice things to say about the work of Michael Bay, but they usually praise the special effects in his movies. Here, D’Amico examines how, intentionally or not, the man has created a visual style that’s akin to cubist artwork. The comparisons of frames from the Transformers movies and futurist paintings are striking. Does this make Bay a skilled visualist? No, but this story is worth reading.

What’s Really the Matter with Cannes and Documentaries? by Daniel Walber at Nonfics
Talk of Cannes, the world’s premier film festival, has been at the top of most film-related conversations this past week. What you won’t hear about are new documentaries, because the festival accepts so few of them. Walber interrogates the festival’s strange aversion to nonfiction filmmaking.

Paul Walker’s Digital “Fast & Furious” Double and the Troubling Future of Film Acting by Sam Adams at Indiewire
In order to complete Fast & Furious 7, $50 million has been added to the budget so that a fake Paul Walker can be painstakingly constructed. Walker’s brothers are acting as stand-ins for the shoot, and his face will be digitally added onto their bodies. Adams considers the implications of such techniques. What does it mean when we might not be able to trust an onscreen performance?