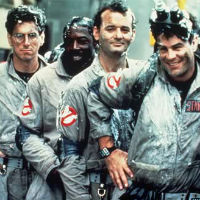 Mel Brooks Remembers the Funniest Movie He Ever Made by Jason Guerrasio at Esquire
In honor of the 40th anniversary of Blazing Saddles, Guerrasio sat down with Mel Brooks to discuss the making of the film. Full of fantastic anecdotes, Brooks is one of the best interview subjects around. He talks about the deeply troubled production (10 of the 12 studio execs who first screened the film didn’t laugh and wanted to bury it) and how he believes that it’s the funniest movie ever made (not that he’s biased or anything). The best bit by far, though, comes when he confirms that the horse-punching gag was based on something Sid Ceasar did.

The Making of Ghostbusters by Lesley M. M. Blume at Vanity Fair
No matter how many of these behind-the-scenes oral histories come out, we can’t get enough of them. Here, Dan Akyroyd, Ivan Reitman, and many others discuss the ins and outs of Ghostbusters, from its inception to its execution right up through the current turmoil faced by the long talked about third installment.

Shailene Woodley and Brie Larson are Out to Conquer Hollywood – and Fix It by Lynn Hirschberg at Vulture
Shailene Woodley and Brie Larson are two of the best young actresses working today; they also happen to be friends. So Hirschberg sat down with both of them to talk about their careers, healthy living habits, and more. Woodley may not call herself a feminist, but she certainly acts the part. Larson is down-to-earth, yet collaborated with Prada for a ball dress. There are many other interesting anecdotes.

Robert De Niro: Me & My Gay Dad by Jerry Portwood at Out
Did you know that Robert De Niro’s father was gay and an artist who worked his whole life without attaining much recognition? Neither did most people. So this interview with De Niro about his father featured one riveting revelation after another. In this piece, published in anticipation of an upcoming documentary about De Niro, Sr., the younger De Niro reveals a vulnerability that may come as a shock to anyone only familiar with his typical screen demeanor.

I call bullshot on that by Matt Singer at The Dissolve
Have you ever watched a movie trailer and been intrigued by a particular shot, only to watch the movie itself and discover that no such image is in it? For years, video game fans have had a term for the phenomenon: bullshot. Game companies will make trailers or even gameplay demos that have nothing to do with the actual finished product. Hollywood is no different, and Singer believes we should be more proactive in calling it out.

Captain Marvel’s Feminism Is All Tangled Up with Military Boosterism