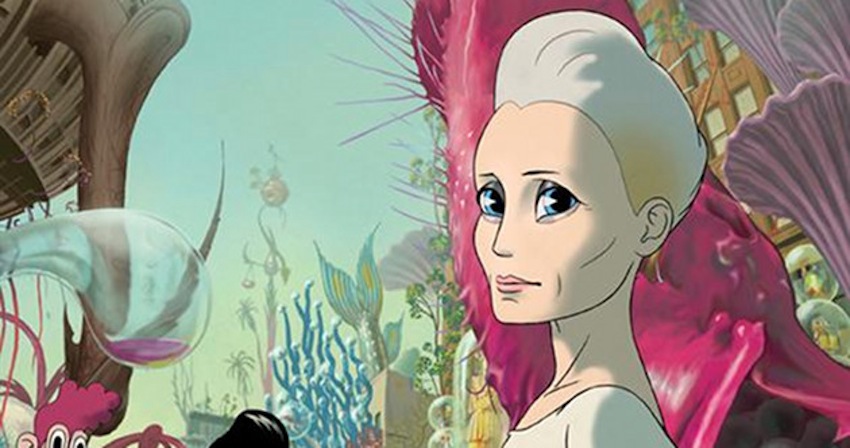 The Congress and the End of Actors by Anthony Kaufman at Science and Film
The futuristic plot of the new sci-fi film The Congress features technology that can capture an actor’s image and create a digital avatar from it for use in other movies–without the need for the actor. We’re not that far from actually being able to do this. Kaufman interviews a scientist who helped create the technology that lets modern movies scan parts of actors to composite onto other elements (think Brad Pitt in The Curious Case of Benjamin Button).

Just How “Nicholas Sparks” is the Latest Trailer for “The Best of Me?” by Kate Erbland at Film School Rejects
Another year means another adaptation of a Nicholas Sparks romance novel (in case you’re wondering, there are still seven books of his that have yet to be turned into movies). By now, the tropes and formulas of the man’s work are familiar. Erbland counts all of them as they pop up in the trailer for The Best of Me.

Lauren Bacall And The ‘Sex? What Sex?’ Kind of Movie Sex by Linda Holmes at NPR
This is partly a tribute to the recently deceased Hollywood goddess and partly a look at how movies of the 1930s and ‘40s maneuvered around the content restrictions of the Hayes Code. While many remembrances this week have understandably focused on Robin Williams’s passing, Bacall should not go overlooked.

Unmasking Isabelle Huppert by Colleen Kelsey at Interview
Over the course of a career that spans more than a hundred films, Isabelle Huppert has worked with almost every art house filmmaker you can think of. Kelsey speaks with Huppert about her latest film, Abuse of Weakness, her role in the current New York run of The Maids, what ties her various roles together, and more.

Film Critics Have Failed LGBT Cinema by Misreading ‘The Dog’ by Daniel Walber at Nonfics
The Dog is a new documentary about the life of John Wojtowicz, whose 1972 bank robbery inspired Dog Day Afternoon. Walber is disturbed by how many film critics have fallen under the allure of the main character, whose charming exterior belies a creepy nature. They’ve missed the point of what LGBT cinema should really be about, he argues.

Flipping the Script by Lauren Tabach-Bank at The New York Times Style Magazine
Tabach-Bank sits down with six female film directors. What’s impressive is that she has sought out filmmakers from a variety of backgrounds, all of whom approach their craft in a different way. There are the indie-focused Sarah Polley and Lisa Cholodenko. There’s genre director Lana Wachowski and animator Jennifer Yuh Nelson. Ava Duvernay and Sam Taylor-Johnson are both about to step into a larger spotlight with high-profile releases. The story also links to a related article that aggregates the work that has influenced each of these women; it makes for a fascinating spectrum of films for viewers to explore.

As Film Stocks Dwindle, Film-Makers Weigh What Soon May Be Lost by Neda Ulaby at Texas Public Radio
Kodak recently vowed to continue producing film stock, but fewer and fewer moviemakers are shooting on 35mm. Ulaby talks with a few people who are still stubbornly holding out in the digital age. Despite what many people think, non-physical media has numerous issues when it comes to preserving movies.