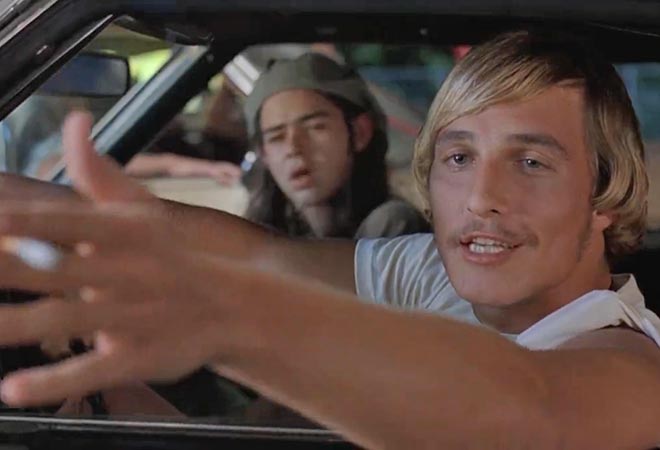 A still from "Dazed and Confused"

“Galaxy Quest”: The Oral History by Jordan Hoffman at MTV.com
This year marks the 15th anniversary of Galaxy Quest, the unappreciated sci-fi comedy that has slowly become a cult favorite. What better way to celebrate a notable anniversary than to reunite the cast and crew back so they can reminisce about making the film? Although none of the modern-day quotes might be able to match George Takei’s commentary on the film from 1999: “[Galaxy Quest is] a chillingly realistic documentary.”

A “New” New Hope by Mallory Andrews at Sound on Sight
For nearly 20 years since the release of the “special editions” of the original Star Wars trilogy, fans have clamored to see the films as they were originally projected in theaters. But film preservation is a tricky art, and celluloid copies of the “original” Star Wars movies are scarcer than you may think. Andrews explores what happens when the public’s right to its cultural history collides with a creator’s right to his work.

Rom Com Week at Grantland
Proclamations that the romantic comedy is dead haven’t stopped the Grantland staff from celebrating the genre this week. From the careers of certain actors to the common tropes of the films, from historical perspectives to cultural ones, there’s a great breadth to the material covered by these articles. Collectively, they form a great survey of the genre.

Can Films Transcend Politics? by Annette Insdorf at The Huffington Post
Amid the recent violence in Israel and the Gaza strip and the resultant international controversy, the Jerusalem Film Festival has been understandably overlooked. But filmmakers from the region can cast vital light on this situation. Insdorf uses the plots of select movies at the festival, as well as material from their screenings, to place the festival’s relationship with world affairs into context.

From SLACKER to BOYHOOD: Cinematography in the Films of Richard Linklater by Nelson Carvajal and Max Winter at Press Play
We don’t normally include video essays, but this one deserved to be shared, especially in light of the massive critical and commercial success of Boyhood. Carvajal demonstrates how each of Linklater’s films uses imagery to lull viewers into a sense of comfort. It’s mesmerizing to watch.