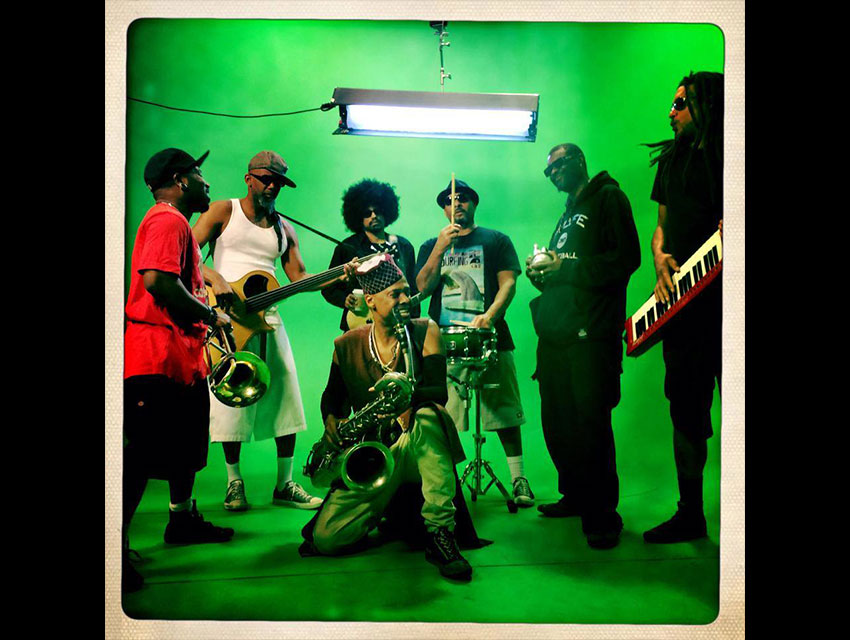 The United Sounds of Los Angeles is a series from music writer Matthew Duersten that delves into the most underappreciated, obscure, and indispensable L.A. albums. There are countless ways to listen to the city; here are 100 of them.

The Album
Fishbone – The Reality of My Surroundings (1991)

The Backstory
In 1979, the California Supreme Court passed Constitutional Proposition 1, initiating a tumultuous phase of mandatory busing meant to combat the racial inequities in the state’s public school system. On the first day of school that year, a young black student bused from mid-city Los Angeles to Hale High School in lily-white Woodland Hills encountered a foreboding scene: “There was parents off campus with some signs that said go home.”

The student’s name was Norwood Fisher. He and his brother Philip, who originally grew up in the Slauson area, had been tinkering around with instruments since they were in elementary school. At Hale they met fellow transplants Kendall “Special K” Jones, Chris Dowd, and Walter “Dirty Walt” Kibby, Jr., not to mention a kid who was already living in the Valley, a charismatic goofball and prodigy named Angelo Moore. An eccentric to say the least, Moore sported a big orange afro, played bass saxophone, and wrote trippy poetry. They all bonded over their shared love of ’70s funk—as well as being, as Moore later put it, “black flies in the buttermilk.” “We wanted to do Bootsy [Collins] covers in Mr. Lewis’ typing class,” Moore told the L.A. Weekly. “That’s where the idea for the band came from.”

They also shared a love of reggae music. “In the late ’70s, R&B radio stations in Los Angeles were playing reggae: Steel Pulse, Black Uhuru, Third World,” Norwood Fisher told writer Mark Spitz in 2009. “We got excited, so we sped those songs up… We thought we invented it! Then one day Dirty Walt said, ‘You ain’t invented shit. It’s called ‘ska.'” Kibby turned the rest of them onto the music of Bad Manners, The Specials, and The Selecter, bands that melded reggae with British punk. “We related to it because it was dance music,” said Fisher. “It spoke to the youth across the color line.”

In 1983, after nearly four years of practicing, the sextet hit the L.A. club scene as a tighter unit than many of the older bands they shared bills with. Leaving none of their influences behind, they played a dizzying stew of heavy metal, prog rock, ska, reggae, punk, and, yes, even country. “[We were] mad about the racism out here in the Valley,” recalled Angelo Moore in the 2012 documentary Everyday Sunshine. “I think we stylistically went so many different places, because we wanted to unify everybody.”

They originally called themselves Hot Ice, then Counterattack, then Megatron. They settled on Fishbone after a disastrous gig at a West L.A. club that featured mostly heavy metal acts. “The booker of the club thought—based on our name—that this would fit. Maybe he thought we were Megadeth?” Fisher recalled to writer Jon Niccum. “It was a horrible show, there were probably like eight people in the audience, and my grandmother was one of them.

Because of their eclecticism, Fishbone could fit onto bills with post-punks acts like Flipper, The Dead Kennedys, and the Circle Jerks as well as local ska bands like Operation Ivy, The Untouchables, and The Box Boys. Fishbone soon gained the admiration of a tight-knit group of similar-minded, genre-busting acts like Psi Com (a forerunner of Jane’s Addiction), The Red Hot Chili Peppers, and Thelonious Monster. The three bands developed a communal aesthetic: their “Fishbone house,” located on Barrows Street near the Fairfax District became a cherished hang; Norwood Fisher shared a house with Thelonious Monster frontman (and future Celebrity Rehab counselor) Bob Forrest; on tour with the Chili Peppers, Fishbone initiated a popular audience chant (“Fish-Bone Is Red-Hot!”). As Johnny Navarro, cousin of guitarist Dave Navarro, told writer Brendan Mullen: “All those guys loved Fishbone. They respected them as the most accomplished musicians out of all that group. Perry [Farrell] and Flea and Bob Forrest and even Anthony [Kiedis] would all be going, ‘We’re fucking great, but look at Fishbone.’…That whole band had an amazing amount of skills.”

Fishbone onstage was chaotic, liberatingm and a little overwhelming, colliding and careening on (and off) the stage like juiced electrons in floppy pimp caps, parachute pants (if they wore pants at all), and mohawks for 22 breathless minutes. Chris Dowd would spin his DMX synthesizer around in a circle before ripping it off its stand while frontman Moore executed spectacular scissor kicks and backflips. Band members would trade instruments by tossing them to one another mid-song. Remembered Psi Com frontman Perry Farrell: “[They were] flying all over the stage to the point where all of the mike stands had been knocked down within the first two songs.”

In 1983, after Fishbone opened for the Neville Brothers at the Palace, they were swept up by David Kahne, a rising A&R scout for CBS/Columbia, who shepherded them though their first two LPs. Kahne positioned the band to break big with a “big picture” strategy of film and soundtrack cameos (Tapeheads, Nightmare on Elm Street 6), music videos (their hard-rock cover of Curtis Mayfield’s “Freddie’s Dead” was in heavy MTV rotation), and unusualist pairings (Little Richard, fine… but Annette Funicello???).

Why You Should Listen
Reality remains a house on fire that burns for 59 straight minutes, from the shifting, math-rock time signatures (a debt to Fishbone faves Rush) of “Fight The Youth” and the buoyant, bottom-heavy fusion-funk of “So Many Millions” to the Styx-like synthesizers and gorgeous mariachi-trumpet coda of “Sunless Saturday.” There’s a recurring musical-comedy routine (“If I Were… I’d”), spoken word segments “(“Junkies Prayer”), snatches of live performances (the slamdancin’ ska of  “Pressure”), and unsettling asides of sound collage (the African drums and sounds of floggingand screaming on the 38-second “Asswhippin'”; the sloppy-drunk NoLo funeral horns of the 31-second “Deathmarch.”) Is the record overstuffed? Yes. Does it contain an intimidating mix of influences? You bet. Are there batshit lyrics that mix social commentary with an X-rated, confrontational sense of humor? No doubt. But the same can be said of The Red Hot Chili Peppers’ breakthrough BloodSugarSex Magik, released five months after Reality. But where the Peppers gave listeners a pause to breathe on the bazillion-selling ballad “Under The Bridge,” Fishbone gave no quarter (unless one counts the tense, spooky doom rock of “Babyhead”). Ultimately, Reality is everything that made Fishbone great and why they didn’t break through in the way their rabid fans hoped: They weretoo too. Too esoteric, too wild, too aggressive, too vanguard.

The Aftermath
For a short time, it seemed like the world would catch up with Fishbone. Reality hit #49 on the Billboard Album Chart and was praised by critics. Spike Lee directed a video for the single “Everyday Sunshine.” On March 23, 1991, one month before the record dropped, Fishbone turned in one of the most anarchic, unhinged performances in Saturday Night Live history. (The host couldn’t have been a better contrast: Oscar nominee Jeremy Irons.)

But there were two problems. No one at Columbia’s publicity department could figure out how to market Fishbone to the masses; even local black audiences didn’t know quite what to make of them. “I think they kinda caught L.A. off-guard,” Ice-T told filmmakers Lev Anderson and Chris Metzler. “The gangbangers would be standin’ there going, ‘Whoa are these crazy motherfuckers?” Added Moore: “I’d tell a lot of black people, ‘Come on down and see Fishbone, man. It’s good music, it’s funky…you need to check it out!’ ‘We’re not tryin’ to hear that stringy-haired white boy music’ is the response I would get…It’s frustrating when your own people don’t wanna come and represent.”

Secondly, the band itself had been unraveling for at least two years, and the recording of Reality, which they mostly produced themselves, brought it to a head. “There was a lot of passion in Fishbone,” recalled Norwood Fisher to writer Frank Meyer. “But there came a point around Reality where we were just filled with so much inner turmoil.” The beginning of the end came when drummer Philip “Fish” Fisher punched David Kahne in the throat during an argument over recording costs.

Then came a bizarre and tragic chapter in the band’s history. Kendall Jones, who had a history of mental instability, quit drinking and turned to a religious cult, destroying his record collection and declaring the music he made with Fishbone “demonic.” In April 1993, Norwood Fisher and four friends attempted to rescue Jones from the group. They were arrested and charged with attempted kidnapping. Fisher was later acquitted, but the episode put an end to Fishbone’s brilliant, blazing first decade.

Fishbone still records and tours, and their party-out-of-bounds music mixed with incisive social commentary trickled down to younger L.A. bands like Ozomatli. Their “ghetto freak” personae can be spotted in the imagery of Cee-Lo Green and Nicki Minaj. Mostly, Fishbone are lauded as mentors and influences to the SoCal ska revival of the ’90s. “There wouldn’t be a No Doubt or a Sublime if it wasn’t for Fishbone,” Sublime manager Jon Phillips told writer Jeff Apter, and the Hollaback Girl herself seemed to agree. “Angelo Moore… was a huge influence on me,” recalled Gwen Stefani. “He just had a sparkle to him. That was always my goal, to give off that kind of energy.”