Home Uncategorized Recap: “The Most Controversial Finale in Bachelor History” 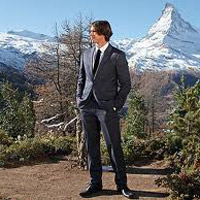 It’s time for Ben to introduce his final two ladies to his mother and sister, to take Lindzi and Courtney on their last dates, to sit down with Jeweler-to-the-Stars Neil Lane, and to put a ring on it—if he wants to.

Ben opens this episode on a bullet train… to disaster. First stop: Zermatt, Switzerland, where Ben’s mom Barbara and his sister Julia are in town (in matching skinnies and boots, natch!) to weigh in on the final two.

“I came into this thinking I would love to fall in love and I found it,” says Ben. “And it feels great… Somehow, someway that big old Matterhorn gives me hope.”

Before he can make any final decisions, he wants to know how Lindzi really (really, really) feels, and from the moment she arrives at Ben’s chalet she fits in with the fam—literally. (They must have been selling brown leather boots in the lobby). Lindzi is sweet and nervous as ever. It’s even charming how she keeps on dropping forks.

“What is it about Ben that you find so appealing?” Barbara asks her after lunch. “There’s so much,” she says.

After their “great date” Ben walks Lindzi out—all the way to the fire road out back.

After about exactly 20 seconds of talk about how great Lindzi is after she’s left, Ben turns the conversation to Courtney and lets it slip that she’s an M word (model!), which is surprisingly distressing to his mom and sister.

In the morning, everyone’s back in their places to meet Courtney. “Ben has a huge decision to make,” says Julie. Yes, almost as a huge as her black-and-white print hat.

Courtney enters with hugs, takes a seat on the couch, and brings up the fact that she didn’t get along with the other ladies—without being asked. (Families love conflict!) “I tried with everybody,” she says, defensively. “It’s because I was falling in love with Ben.” Love: it brings out the worst in people—isn’t that way they say?

Later, Ben’s mom asks Courtney what she loves about her son. “We laugh all the time,” she says, confirming our deep suspicions that these two were spending a lot of private time together when the cameras weren’t rolling.

Julia is blown away. And so are we—but in different directions. “Courtney is more of what you want,” she tells Ben, who is relieved to have her approval.

But Ben still has final dates to go on and a heart to break into a million tiny shards of glass, so he picks Lindzi up in a horse-drawn carriage the next day, then takes her for a private picnic in a gondola (well that’s one way of taking the stress out of using chair lifts out of the equation) and a tandem run down the bunny slope—with lots of kisses and compliments thrown in.  “Can you see an ‘us’ in the future?” asks Lindzi. “I’ve seen ‘us,’” says Ben. “I saw ‘us’ in San Francisco. I saw ‘us’ in Florida… so yes.”

Lindzi continues her excruciating exercise in opening up later that night. “I’ve never met anyone like you and I feel like we’ve come so far and I want to start a life with you,” she says. “I hope you know that I can continue to keep giving you everything.”

“I’m glad you feel that way,” he says, collar popped.

“It’s the first time I’ve been so sure of something,” she says. “Mmmm hmmm,” he says.

In the morning Ben takes Courtney on a “helichopter” tour of the Matterhorn. “We’re higher than the Swiss Alps and I hope our relationship is progressing to new heights,” he says. Well, the altitude was giving us a headache, so suffice it to say yada yada yada, hoopla, hoopla, hoopla.

Later that night, we find out Courtney’s not going to be this 2012’s Scrapbooker of the Year. But at least she’s a traditionalist (Lindzi forgot to give Ben the requisite last night gift!). Unfortunately, after she Courtney pours out her heart, she starts to melt down.

“There are moments I feel like you’re questioning me,” she says, out of the blue. “I don’t know why we are getting into it right now,” says Ben, genuinely confused. They kiss goodnight on just-OK terms.

It’s Judgement Day at last. Before getting down to business, Ben walks down cobblestone streets and goes to see the Matterhorn, that universal beacon of Hope (hey, it’s Ben’s show) from his balcony.

And just when we thought he wasn’t coming this year, Neil Lane arrives with his briefcase of diamond rings. “I’m Neil Lane!” he says to Ben, who you’ll no doubt remember picked out a Neil Lane sparkler for Ashley H. just last year. Awkward!

By the time Ben’s selected a ring and is in position at cliff’s edge for the moment we’ve all been dreading, er, waiting for, Courtney and Lindzi have curled their hair, looked pensively out the windows, and put on gowns and capes that age them only a decade each.

Lindzi’s first out of the helicopter.

“If things don’t work out, call me,” she says, falling to pieces. Yes, it’s awful, and self-demeaning and totally not what Ben deserved to hear, which was nothing or a simple “goodbye.” But Lindzi’s young, and hurt, and classy enough not to say something mean, except to herself. So we’re giving her a break (and a stern look).

Courtney’s feeling great, even before she knows Ben has sent Lindzi home. “I’m a good person and good things happen to good people,” she says, seriously.

“What a journey,” says Ben, clearly happy to have Courtney before him. “From our first date in Sonoma where I felt like we were on this same path and wavelength of sorts to Belize, where I had a moment of past, present, and future at the top of the ruin. Whenever I’m with you, I have these incredible moments. I think you are an incredible woman. But I promised myself that I wouldn’t get down on one knee again unless I was certain it was forever. And I want to tell you that you are my forever. You’re my forever and I have waited a really, really long time to tell you that I am in love with you. This whole experience and journey has been with it every step of the way…

“Courtney will you marry me?”
She will!
Will she accept the rose?
She will.

So that’s it… another couple has a happy(ish) ending, and we’re happy(ish) for them and wish them well.

Oh wait, what? The relationship was revealed to be incredibly strained on The Bachelor: After the Final Rose while we were toasting their impending nuptials with a glass of Brut in the other room? That’s it. We can’t watch this show anymore. At least not for a few more weeks.