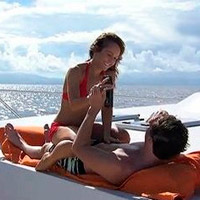 Two orders of business before we can begin:

First: an apology. Two weeks ago we told you a guest blogger would recap Ashley’s hometown dates. Well, due to a highly complicated situation (read: long but boring story), that didn’t happen, and we’re sorry.

Second: an unabashed confession. We love the overnight dates episode—people drop “L-bombs,” everyone looks tan and gorgeous, and the scenery is insane. But this is also when we start feeling flu-ish every Monday—people are dropping L-bombs and, you know, heartbreak is near. (We don’t have any issues with the scenery.) So grab a pack of Tums and a box of Kleenex, we’re going to Fiji!

Turns out Ashley has always dreamt of falling in love in Fiji. Is that weird? Considering it’s half way around the word from where she lives? Maybe. But whatever, our Bachelorette is feeling great!

Speaking of letting go of reality, Ryan P. is in Fiji to surprise Ashley! After their last date—the one on which Ashley sent him home practically mid-sentence—Ryan was left feeling as if Ashley hadn’t given their relationship a real go and might be regretting sending him home now, so he’s flown to Fiji to see if she’d like to spend more time with him. Because that ever goes well. The producers—masochists with a sense of humor, all of them—make him walk like eight miles to get to Ashley to “see if there is love to be had.”

Once he’s gotten over the shock of seeing her, Ryan reminds Ashley of all the things they did on their last date and how she dumped him and how he doesn’t want to go through life sweeping past relationships under the rug any more. “I want to spend more time with you so bad,” he says, his voice cracking. Then, inexplicably, he gives Ashley a card with his hotel information on it (no wonder he had such a long walk—the producers put him up somewhere else!) and tells her to maybe give him a call sometime, you know, if she has the time.

Well, she doesn’t, cause she’s off for her overnight date with Ben!

Ben and Ashely start their date on a yacht, where Ashley has Ben spray her all over with sun tan lotion and then returns the favor. “We’re giddy little school children,” says Ben. “It’s like we’re on our honeymoon or something,” says Ashley. Good time to get wet! After some snorkeling, Ben tells Ashley his feelings are getting stronger, and tells us how he has “found himself” on this journey. It’s actually pretty moving stuff. “There’s so much I want to tell Ashley,” he says. Unfortunately, they’re too busy making out to talk.

Later, over their candle-lit dinner on the beach, Ben says he feels like he is beaming, and he is.  “I’m on my way to the whole I love you thing,” he says. Time for a fantasy suite card! Ben accepts, and before they can refold their cloth napkins, Ben and Ashley are enjoying one of the most beautiful wood-floored and candle-filled fantasy suites with a private pool that we have ever seen. The whole thing’s a little cheesy and a little sleazy and, we’ve got to hand it to Ben, totally gush-worthy. And then he carries her out of the pool and into the bedroom! (!!!!!)

In the morning, Ashley meets Constantine for their date, and when he finds out they’re going on a helicopter tour of the Fiji islands, he becomes way more excited than he should be. He even tells Ashley that she’s crushing his bucket list.

She’s also crushing Ryan’s heart. Because he’s still there! In fact he’s just waiting down below along the helicopter’s flight path, wondering aloud if Ashley’s ever going to stop by his room.

But she’s with Constantine, and now they’re jumping into a waterfall, because “sometimes you have to take a leap of faith.” Constantine takes his leap with his sneakers on. During lunch Ashley lets him know that she has some lingering concerns about his ability to commit. “You looked at 108 houses before buying your house!” she says. (He did?!) He responds with a blank stare and from here things are going nowhere slow. Finally, after we took a power nap and (we’re guessing) they ate some food, Constantine rejects the fantasy suite card, saying he doesn’t want to pretend to be in love. “If we are going to be honest about it,” he tells Ashley, “this means the end of the road for me.”

Constantine’s early departure doesn’t break Ashley’s heart, but it does get her thinking. “What if I end up all alone and all of this was for nothing?” she asks. What if?

And that’s when she decides to visit Ryan, who for all we know is in the final throes of a hunger strike. And actually, he does look like a wreck, but he’s still positive when he sees Ashley. “She has so much natural energy,” he says. (And that’s his thing!). Still, it’s bad news for him.

When we returned, J.P. was waiting with open arms! For their “fun, romantic, and adventurous” date, Ashley takes J.P. to the private island of Namenalala on a water plane. There, she tells him how much she loved his family (they adored her too!) and J.P. tells her how badly he wants this whole damn thing to be over already (like, so badly!). “When I look at Ashley, I see the woman I want to spend the rest of my life with,” he says.

Then they meet for dinner on the beach. When J.P.’s not trying to get comfortable on their futon, he’s telling Ashley how much he likes her. “Well I said goodbye to two guys this week,” she says, unaware that she’s leading him to think he’s the last man standing before backtracking to explain Ryan’s return and Constantine’s departure. He takes the news in stride, then takes Ashley to their fantasy suite, a villa in the middle of the jungle. And then he says it: He loves her!

Time for a chat with Chris Harrison, who, given how many questions he has for Ashley, hasn’t been watching the show in his downtime. After Ashley fills him in, she meets the guys even though there’s no one to send home, saying she wants to give them a chance to really think about how they are feeling and if they can see themselves getting engaged in one-week’s time. Or maybe it’s because ABC has ten more minutes of airtime to fill. Either way, we’re feeling the love.

Good news! Both guys accept a rose and we’ve still got a full box of Kleenex. Someone call Neil Lane, we’re down to two!

See you next week.