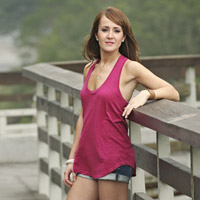 It’s been a two full weeks since our last date, so don’t worry if you can’t remember what we were just talking about. Besides, Ashley’s happy to give us a quick rundown, anyway. “I have six amazing guys left here with me in Taiwan,” she says. ”I like Ryan because I just love our conversations and his energy, I’m feeling really good about Lucas. Ames is one of the most unique guys I’ve ever met. I love Ben—he’s funny! Constantine is easy to look at, and J.P. makes me feel secure.” Sounding familiar? Oh, and Bentley is in the way-too-recent past not to be mentioned alongside a reference to moving on. And…we’re back! Great. Let’s fall in love.

Before her first date of the week, Ashley’s feeling positive. “The guys are all really excited to be here,” she says, “That means the world to me.” She’s close, but no cigar. J.P., for one, is not feeling so excited to be here. He’s “as scared as he has been in a long, long time.” And we’ve got to say, he makes fear look sort of sweet.

Constantine, Let Your Love Light Shine
Ashley’s first one-on-one date is with Constantine, who has finally given up on asking Ashley where they are. They take a steam engine to a small village outside of Taipei, and it’s all very Out of Africa—minus the intrigue, the chemistry, and the memorable dialogue.

When they arrive in Ping Shi, Ashley and Constantine meet up with paper lantern artisans wielding paintbrushes.

“So, do you know what this is all about Constantine?” asks Ashley.
“Something about the lanterns?”
“We’re going to put our love with on both sides and then we are going to set them free and our wishes are going to come true.”

We wouldn’t blame you if you expect Constantine to paint an elephant on the lantern—we did too!—but in fact, it was Ben, the other Constantine, who painted an elephant (at an orphanage) earlier this season. This Constantine paints the numbers 2011 and a dash to memorialize his ongoing relationship with Ashley. “2011 minus?” she asks. And people say comedy is dead!

Over dinner, Constantine asks Ashley what she sees in him. Here is what she says:

His hard-to-get-ness aside, Constantine says he’s ready to take the next step with Ashley. He’s ready to release a love wish. Together, they set their lantern off into the night sky, then take in the orb-filled view, which is truly stunning. The chemistry between them, not so much.

Ben, Let’s Spend a Gorges Day Together in Taiwain
This week Ashley says she needs to see if there’s an emotional and physical connection “there” with Ben. To get to the bottom of that mystery, she takes him—or has him take her, rather—on a moped tour of the area.

After hitting the road, Ben and Ashley change into something a little less comfortable for a private fireside dinner. “I’m on the tipping point of having stronger feelings than just liking you,” says Ben. And “I don’t throw the L-bomb around often.”

After Ben drops the L-bomb bomb, Ashley says she feels like he’s her boyfriend.

Needless to say, this—and the fact that Ben gets back to the hotel the next morning looking like he’s spent the night in a sorority house—doesn’t sit well with J.P.

Ryan’s having a hard time, too. He has even been having trouble sleeping the last few nights. It’s really getting to him. Or maybe he’s just jetlagged. Are we right?

J.P., Lucas, and Ames: I’m Grooming You For the Big Day
So J.P, Lucas, and Ames get this week’s group date, and it’s a doozey: They get to dress up and watch each other take wedding photos with Ashley.

Lucas goes first, and he’s forced to wear traditional Taiwanese dress, which, as far as his traditional southern self is concerned, may as well literally be a dress. “It’s very sliming, at least,” says Ames. Of course he does.

Ames gets a bad blue retro suit and J.P. gets a classic tux—which almost makes him happy.

“I think the guys look really cute. And the most important thing is they don’t have a choice are playing along with it,” says Ashley.

At the cocktail party later, Ashley admits the guys didn’t have nearly as much fun as she thought they would, and so she tries to make them relax. By telling them a story about this time that another guy named Brad gave her a hometown date rose.

After that, Lucas says some very sweet, traditional things to Ashley about marriage, Ames shows Ashley some photos from his childhood, and J.P. tells Ashley how jealous he is feeling. Yep, J.P. gets the rose, and he’s back on cloud 9!

Ryan, Let’s Get a Taste of Taipei
Eco-businessman Ryan is so excited at the start of his date with Ashley—the first that’s a one-on-one—that something inside of him feels like it’s bursting. Because we like you, we’re going to refrain from making a really bad energy joke right now.

Ashley and Ryan watch locals praying, take in some Thai Chi (which Ryan apparently knows a thing or two about) and lo and behold the clouds finally clear. “We finally have our date and the sun comes out!” he says. We could make another bad energy joke here, too. Just sayin.’

But Ashley’s feeling less, well, sunny. So even when Ryan points out “this little guy” (a bird) and “that one!” (a koi fish), she looks less than enthused. When Ryan asks her what sort of things she does for the environment, Ashley finally perks up—and launches into a story about dating a guy who made her reconsider her lifestyle by dumping her for tossing a plastic bottle in the non-recycling bin. Ryan seizes the chance to pitch talk to Ashley about water heaters and the size of their tanks. Which unfortunately, isn’t a euphemism for anything at all. “You only need hot water when you wash dishes or take a shower!” he says. “Why doesn’t every house have a tank-less water heater?” “Ill think about that one day,” says Ashley.

But not today! Because today is the day Ashley sends Ryan home. “I’m just not feeling it,” she says. She takes a moment and walks him out—well out of the outside area where they were, anyway—and Ryan gets really choked up talking about how he wants to love someone unconditionally and wants to be a father. But “to be honest?” as Ashley would say, he looks only quasi-crushed about their actual breakup. He hails a cab without incident.

This is the “most critical” Rose Ceremony, according to Ashley. (We have no idea.) And there’s no cocktail party, because Ashley has already made up her mind.

NOTE: Due to a scheduling conflict, I won’t be able to tag along on hometown dates with you, Ashley, and the guys next week. A very special guest re-caper will do the honors. What, you thought Chris Harrison was the only one who could throw out a twist? Have a great two weeks. I’ll see you somewhere tropical soon!