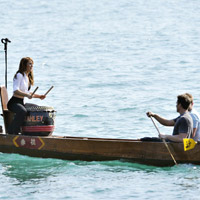 Welcome to Hong Kong, one of Ashley’s favorite cities of the ones “that she has ever been to”! After all, it’s the place where time capture video editing makes it look like time stands still just for her. And in a way, time is standing still just for her: ‘cause believe it or not (go on, believe it!) she’s still not over Bentley. “He wanted to leave on a dot, dot, dot,” she explains, “that usually means to be continued.” Got it?

To help Ashley put their relationship into perspective—and the past—Chris Harrison et all fly Bentley over to Hong Kong so he can dump Ashley once more with feeling. “This is the room he is in right now,” says Chris, sliding a notepad with #4315 scrawled on it.

Moments later Ashley’s off to knock on the door of the hotel room whose number Chris Harrison dare not speak.

After planting one on him, Ashley tells Bentley that she had a really, really hard time after he left. “Was it fun though?” he asks.

Nevermind how much thinking that takes Bentley, Ashley gets the point. “So that’s it?” she asks. “Ok,” he says.

Lucas, Let’s Find our Good Fortune on the Streets of Hong Kong
By the time Ashley has said goodbye—again—to Bentley and met Lucas for their first one-on-one date (to a local marketplace for exotic eats and a late-night sail) she’s feeling great. She laughs good naturedly at Lucas for not being well traveled and asks him what is the hardest thing he has ever been through. (A: The end of his marriage, which “wasn’t meant to be, but God has a plan”).

In return for opening up, Lucas gets complimented for being a “real” guy, a rose, and a kiss. OK, so he has to ask Ashley if she’d mind being kissed, but he kisses her nonetheless. “In this moment I am so happy,” she says. Well.

Ryan, Mickey, Constantine, Ames, Ben, and Blake: Let’s Get Our Hearts Racing
Muay Thai boxing is so last week. For this week’s group date Ashley takes the guys dragon boat racing. And of course, there’s a twist: the guys, paired up in teams, must recruit strangers to help them row.

Over the next ten minutes, Constantine and Ben, Ames and Mickey, and Blake and Ryan (who apparently left his razor in Chiang Mai) walk around talking to a lot of people who pretend not to speak English.

Mickey and Ames search out dragon boat racing pros. Ryan annoys strangers (mostly women and children) into joining his team.
And Ben and Constantine go…shopping. Yes, really. They buy red robes that somehow do the recruiting for them. We can’t explain it.

Then they’re in the water. “Let’s go guys,” yells Ashley at no one in particular, “you’ve got this!” By the end of the race, it hits her: she’s looking for a husband, someone she can see a future with. Welcome to the show!

At the cocktail party that night, Ames takes their relationship to a new level—namely, the 48th floor—with some sleazy elevator kissing. “Where are we going?” asks Ashely around floor 10. “I don’t know,” says Ames, “but I’m enjoying the trip.”

“Wow!” says Ashley once they reach the roof. “That took my breath away.” We’re not positive, but we think she means the view.

Ames isn’t the only guy falling in love. “My feelings for Ashley are really getting strong,” says Ben. “Who would’ve thunk it? The biggest skeptic of all—(pointing at himself) this guy.” Not counting all the guys who didn’t sign up for the show.

Still, to the horror of every one else, Ashley gives the rose to Ryan. “Shush!’ he says, feigning surprise. Yes, please do.

J.P., Let’s Take a Peek Into Our Future
J.P. gets the second one-on-one date of the week, and she takes him for dinner in a Chinese zodiac park. There, J.P. tells Ashley how much he likes her. And she tells him how much she liked Bentley. “I want to not leave here feeling like I have unfinished business,” she explains. Because he’s wonderful (seriously, we can’t really make fun of him at all and we’ve been trying!) J.P. thanks Ashley for telling him the truth and says he’s glad she got the closure she needed. He even says something that made us laugh! “I thought Bentley was going to pop out of the woods somewhere!” Wouldn’t that have been something.  “Things are perfect” he says. “We’re on the right track.”

At the final cocktail party of the episode, Ashley’s feeling liberated, and not just because she’s wearing a mini dress made for New Years Y2K. She feels happy and optimistic, and she takes the chance to tell the other guys about her run in with Bentley. It goes something like this:

So, do you remember there was this other guy here named Bentley? I fell in love with him in the week that he was on the show and, what do you know, he came to Hong Kong just two days ago and—good news!—I’m now exactly where you thought I’ve been emotionally for the past three weeks but really wasn’t.

It goes over like ham on Hannukah. Lucas accuses Ashley of wasting his time. Blake lets her know how not special it makes him feel. Ames stumbles over an attempt to make this “complication” seem “beautiful.” Mickey up and leaves.

We’ll see you next week in Taiwan.