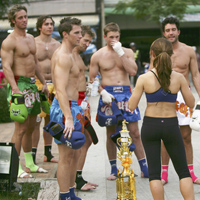 Welcome to Chiang Mai, the “the perfect place to fall in love with Ashley!” according to Ames (something about monks in saffron robes—they’re celibate, right?). Anyway, Nick at least is ready to take his relationship with Ashley “to the next level.” For her part, our lady of the two hours is “feeling like things are really looking hopeful and promising for me.” And Chris Harrison reminds the guys “only one of you will have the chance to become Ashley’s husband.” Despite all the obviously similarities, we’re going for True Love, guys, not Big Love, got it?

Ben F. Let’s Fall in Love in Chiang Mai
Ashley’s first one-on-one date goes to quiet painter of elephants Ben F., and she takes him for a walk, a cab ride, and a stroll around a local marketplace where they “get a taste” of street culture. (Note to Ashley: What are you doing? Farmers’ markets are J.P.’s thing! Didn’t you watch episode 1?! This gives us a bad feeling…) They also join a street band (she plays the symbols), paint mini parasols, and find God. Well, sort of. They sit outside of a beautiful temple and show their respect for Buddhism by closing their eyes and mutually think about kissing instead of actually doing it. “Mm,” they say, almost in unison, “that’s good.” Ick.

Later that night, Ashley and Ben walk through an Ashley-sized door to a private, candle-lit and flower-strewn garden dinner. Ben tells Ashley this really sweet story about how just one year ago he wasn’t emotionally available because he was mourning his late and loving father. “I’m glad you’re in a good place,” she says, as if she heard a good quarter of the conversation. Then Ben sketches out their future: “spending time together, wine parties, get-togethers with her friends—your friends. Spoiling someone else for once is the agenda.” Cue the stunning private fire show, some making out, and the giving and receiving of rose #1.

For the group date, Ashley plans a day of Muay Thai boxing, and it’s as terrible an idea as it sounds! After “three hours” of training (shirtless sweating, mostly) the guys are paired off and put in the ring—to kick each other’s asses. It goes something like this:

Blake v. Lucas:
Although, the award for least believable commentary goes to Lucas for this gem: “I’ve been in a lot of street fights.”

Ames v. Ryan
Poor Ames, who hasn’t been in a lot of street fights, goes down in his hot pink shorts (he only got stuck with those “because he is so polite” OK?) and ends up looking like Taylor Swift when she’s sort of sad and sort of confused.

Nick v. Constantine
But really, who cares by this point? Ames heads to the hospital for a check up and Ashley’s having some regrets.

Time for cocktails!
The party gets off to a downbeat start and goes nowhere fast from there. Ashley, dressed in something we can’t quite define but know to be inappropriate, talks with Blake, who thinks he is a bit behind in the competition (well, yeah). Lucas shows Ashley how to swing an invisible golf club (“Fore!”), and Ames returns looking a tad too pale for our liking. And, because this is Ashley we’re dating here, there’s lots of talk about Bentley. Bentley, Bentley, Bentley. Bentley! BENTLEY!

“Initially I was attracted to someone like Bentley,” says Ashley. As in, Bentley. But he’s not there and so the rose goes to Blake!

William, Ben C.: Guide Me to Love
For her first “Thunderdome date,” as William calls it, Ashley takes him and Ben C. for an Elephant Life adventure, which starts off with a ride down the river. It’s very romantic—just Ashley, Ben C., William, and a man in the water pushing their raft along even though Ben and William both have paddles.

Without even stopping to realize that that would be impossible—no one looks forward to dating Web sites— Ashley storms off and sends Ben C. to get packing.

Her journey to become the person on TV who exhibits the worst judgment of character continues over dinner with William. “You didn’t even question it. That says a lot,” he says of her decision to confront Ben. We agree. Then William lets it slip that he’s “looking for someone to have fun with.” Four sentences later, Ashley says these dreaded words: “I’m going to walk you out.” And just like that it’s decided: William is the world’s biggest jackass. His words, not ours.

Time for another cocktail party!

Everyone is thirsty for life, we know—but before the group can get to drinking Ashley shares a few words about being true to yourself (and most importantly, her). This leads to a barrage of suitors insisting they care for her. Not Constantine—he goes only so far as to say he thinks she’s sort of neat, but maybe not as neat as some of the guys—not yet, anyway. Then lightning strikes. Literally.

In her pre-rose ceremony chat with Chris, Ashley finally “admits” what we’ve all been hearing about non-stop fearing: she’s NOT over Bentley. “In order for me to move forward in these relationships, I need to put this in the past,” she says, “I think I need to figure out a way to close this Bentley thing off…That’s not normal.” “No,” says Chris. Still, he promises to see what he can do to help her get closure.

And then she gives out some roses.

So 2,000 mentions of Bentley, but no Bentley. Not in this episode anyway. And now we are all going to Hong Kong. We sort of hope she’s not feeling “so hopeful” again when we get there. See you next week!