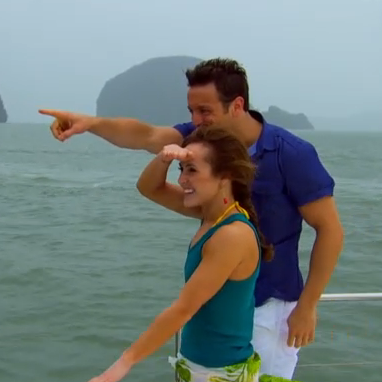 After last week’s double downer, Ashley’s out of bed (and her PJs), the sun is shining, and it’s time for a fresh start! Hey, don’t give us that hopeless look, Chris Harrison says so.

“It’s time to move on,” he tells the guys. “But I don’t think we can do that here. So fellas, get ready to leave this mansion forever. You will continue this journey to find love in the beautiful country of Thailand. Wheels up in two hours.”

In Thailand, Ashley feels like “things are looking promising,“ and she kicks off her stay in Phuket like any good tourist would: with a quick trip to the concierge of her hotel. “I have twelve guys here,” says Ashley to the woman behind the desk—who is stunned. “And they’re hot!” Her point isn’t lost in translation—and either are her red cutoffs and chunky white heels (an outfit like that says “classy” in every language but Italian).

Constantine, Let’s Sea Phuket Together
Ashley’s first one-on-one date of the week goes to Constantine, who is so very excited he pulls out his finest threads: orange shorts that scream beach volleyball and his lucky Adidas slip-ons. “Where are we?” Constantine asks Ashley when he sees her, by way of hello. “No, really, where are we?” Um, you’re in Phuket where it’s too rainy for you to take a boat trip to a private island as Ashley planned. “We can go shop for the ugliest Hawaiian shirt?” he says. Bra, you’re in PHUKET! Maybe shop for a map instead?

“Constantine just goes with the flow,” says Ashley. Yeah, he’s high. But that’s okay, he’s perfectly capable of touring the town, and on a walk, Ashley and Constantine run into an exotic extra a wise local who enlightens them with the secret to a happy marriage: “Don’t try to win.” Then they get beers (with cozies!) at a local sidewalk café.

Unfortunately, Ashley’s still thinking about Bentley. But “I’m excited to see where it goes from here,” she says.

Well, here’s where it goes: straight to dinner on the beach and a conversation about Constantine’s relationship history. We’ll spill the beans: He’s trying out the whole relationship thing for the first time! Exciting.

“How did you stay positive through all of this?” Constantine asks Ashley of her time on The Bachelor, not joking. “I stayed true to myself,” says Ashley, not joking either. He gets the rose and a late-night ocean run.

Back at the hotel, Blake makes the unfortunate decision to compare Ashley to “a piece of fruit.” No one seems to notice—and we’ve decided not to dwell (fruit is better than meat)—but let the record show the Culture Files no longer considers Blake… oh, we don’t know. We never really considered him in the first place.

Ben F., J.P., Blake, Mickey, West, Ben C., Nick, Lucas, William, and Ryan: Let’s Make the World a Better Place
For her group date, Ashley takes the guys to the Baan San Fan Orphanage, where they spend the day painting, putting up soccer nets, and generally improving the grounds. “It’s exhilarating,” says J.P. It must be—everybody is soaking wet! Ryan names himself project manager, just for fun. Ben F. paints a mural of an elephant, to stand out from the crowd. And Ashley hopes “this will allow me to reconnect with the guys.” She may be onto something—spending time in separate rooms can make some relationships better.

After their day-o-labor, the group gets a surprise visit from the kids of the orphanage, which is rather special, and a late night pool party, which is not (unless you count Ashley’s oversized mesh hoodie. Or was that a reworked soccer net souvenir?) Ashley uses her time to makeout chat with Ben, Blake, and J.P., and Ryan uses his time to drive the other guys even further up the wall of their thatched hut suite. Ben F. gets the rose, and everyone goes for a swim in an oddly shallow pool!

Ames, It’s More Romantic in the Rain
“I’m just feeling really lucky to spend time with this charming and beautiful woman,” says Ames at the start of his first one-on-one date with Ashley. Note to readers: He’s sort of been here, done this. No really, he has already climbed the mountains of Phuket (after graduation) and then returned to attend cooking school last year (he was the only non Thai student). This experience, however, is different, because of Ashley. “I feel like I’m on the Titanic or something,” she says, putting her arms out to recreate the movie’s classic front-of-boat scene. “Let’s hope not!” says Ames.

Soon they are out of their boat and into a kayak for some exploring. “Navigating these caves is a lot like navigating a relationship,” says Ames. “Around every corner you really don’t know what to expect, but often there is something beautiful.”  Aw(?).

Over dinner, Ames finds himself falling for Ashley. “I’m besides myself,” he says. “I really want the rose.” He also lets it slip that he has white boards “all over his apartment!” (Like we didn’t already guess!) He gets the rose. “Ashley and I didn’t kiss tonight, but we did something much more intimate than kiss,” he says, starting to worry us, “we talked about serious things.”

It’s time for a cocktail party, and you know what that means—sequins! Tonight they are stripped and a little subdued, and for that, our friends over at Chic Leak believe in miracles.

At the party, Ashley talks to West about his controversial past and talks to Lucas about moving on from his divorce. Elsewhere, Blake talks to Ryan about how annoying he is. Ryan responds, naturally, by bringing up American troops and the rain in Phuket–with a angry smile on his face.

Oblivious to Ryan’s violent transformation into Jake Pavelka, Ashley asks Chris for an extra rose for the ceremony. He obliges.

The journey continues next week in Chiang Mai! See you there.