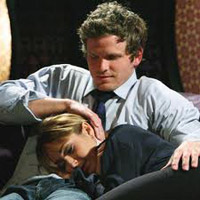 In a phrase, everything about this episode of The Bachelorette is out of whack: the show started at 8, not 9 (Doh! Tivo, what are we paying you for?!), the guys are jerky, and it rains, a lot.  But right before we threw in the towel and jumped under the blankets for a good cry, we heard Chris Lambert’s voice in our ears. “Find the first half of the episode online and recap it,” he said. “You don’t get a rainbow without the rain.”

Chris, this one’s for you.

Ben C., Love Strikes in a Flash
The first one-on-one date goes to Ben, and who is “optimistic about their chemistry together.” It’s a good thing too, because Ashley takes him to a studio where she teaches him choreography to a dance she apparently made up. “Pretend like you’re pouring a bottle of something over your head,” she tells him while showing him one step.  Where’s Tenley when you need her? All the dancing turns Ben on and Ashley thinks Ben is going to be blown away when he finds out she’s invited a hundred other people on their date at a “very public mall” (The Americana at Brand in Glendale, natch) to perform the dance as a flash mob. Cuase guys love it when you invite other people on your date!

Ashley sets the scene by telling Ben she wants to do the dance in the middle of their picnic lunch at the mall. “Do we even have music?” asks Ben. They don’t. But this is TV, and so he “does it for Ashley” like a champ, which is pretty spectacular to see. Soon enough, Ashley and Ben are joined by the mob and the band Far East Movements, who puts on a not-so-private performance. “This is the most ridiculous first date that I’ve ever been on,” says Ben.  We hope so. But it wasn’t ridiculous for ridiculous’ sake: at the end of the day Ashley says the date put to rest her questions about Ben’s dancing ability. Thank God.

Over dinner, Ashley asks Ben what he’s really looking for. The answer: A Perfect Love. “Why not blow off the roof? Why settle for any less?” he asks. “You’re kind of a hopeless romantic,” she says. Kind of! He gets the rose.

It’s time for a group date, and time for Jeff to finally—FINALLY!—take off his mask. But not before giving Ashley a lecture about true love, which he says starts with something from the inside. After the reveal, Jeff shares these big words to mark the occasion: “Hi. I’m Jeff.”

Things go downhill from there. The group heads to The Comedy Store where the guys find out they will be roasting Ashley. Some of the guys feel uneasy about making fun of Ashley so soon after meeting her, but not Jeff. “Behind that mask is some gutsy humour,” he says. HA! Okay, got us there. Ames has a different take on the date: “This is the most traumatic thing I may have had to do in my lifetime.” Not so for Wills, who seizes the opportunity to put his career in sales on notice: “This is what I’ve been dying to do my entire life.” If I can impress Jeffrey Ross, it could open up a door for me to do my dream.”

In the end, Lucas plays it safe. Ryan bombs. Ames makes fun of Jeff. Blake takes out all the guys. Jeff “Love Knows Not Physical Appearances” criticizes Ashley’s body. And the only person who laughs at William’s mean-spirited quips is William.

Ashley cries, William takes a walk around the neighborhood, and Bentley woos, sort of. “Of the 25 guys, I promise you, at least 24 of them were really excited it was you,” he says.

Thisclose to connecting the dot-dot-dots between that zinger and the warning she got (from Michelle Money!) about Bentley before the season started, Ashley confronts him about his intentions. Bentley does not, with certitude, refute her claims. Unfortunately, he does say just enough for Ashley fool herself into hearing what she wanted to hear, which she does, with a smile.

But Ashley’s happiness is short lived. In the morning, Bentley packs his bags and tells the guys it’s time for him to go home. He even puts his arms out so they can each hug him goodbye. But Instead of letting Ashley down easy—what, and show some level of humanity or class?—Bentley breaks the news that he’s leaving like it’s an R. Kelly hip-hopera: slowly and without making much sense.

“Even if I’m not coming back,” he says, “I still want to keep the dot-dot-dot there.” When he does finally leave, he walks out into the rain and without an umbrella to cover his evil-soaked heart.

The whole situation puts Ashley over the edge—and straight to bed. “How can I do this?” she asks her comforter between sobs. “My heart is, like, totally broken.”

J.P., There is No Place Like Home
Luckily, a few hours later, J.P. arrives—with super cheery yellow flowers wrapped in newspaper that we like to think he picked up at the farmers’ market!—to save the day! Or at least to save the night. And although she didn’t see it coming, Ashley has a pretty good time! She has such a good time (or is just so emotionally drained), in fact, that she finally lets down her guard—all the way down to the sort of sticky ground! Ashley suggests they change into something more comfortable—sweatpants—then accessorizes with glasses, a ponytail, and some fuzzy slippers. J.P. is just far enough on this side of good natured not to be mortified, and for that, he gets a rose, Ashley’s promise for a really fun next date, and a super steamy pajama kiss by the fireplace.

By the time the cocktail party rolls around, Ashley is back down in the dumps. Even the most sparkly fake sparkly thing you’ve ever seen try to choke someone doesn’t help light up her face. Chris Harrison can “see in her eyes” that Ashley is hurting. “I think I loved that guy,” she says of Bentley.

“Was it the idea of him?” asks Chris, genuinely trying to be the Man Who Got To The Bottom of Why Girls Like Bad Boys For All Mankind. “ Was it because it was sort of forbidden? He could have stayed here. A real man would have moved heaven and earth. He would have.”

But Ashley can’t give Chris the insight he needs, and it’s heartbreaking for both of them, really. “Now walking into the room tonight I am going to feel so alone,” she says.

The guys waiting for Ashley in the living room aren’t faring much better. Jeff looks like he wishes he was wearing a mask, and poor William thinks it’s all his fault. We’re not positive, but we’ll say it’s also still raining. And so it’s for the best that Ashley nixes the party and sends the guys straight to the Rose Room for a ceremony.

After a few bittersweet words, the Saddest Episode of The Bachelorette Ever To Air comes to a close.

Ugh. We need a vacation. Phuket will do! See you next week.