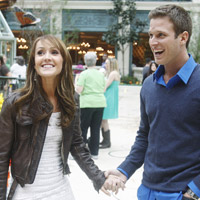 William, Want To Make a Splash in Vegas? I do.
Ashley’s first date is a one-on-one and it goes to William, the 30-year-old cell phone salesman from Ohio, which gives him mixed emotions. Ashley’s feeling the same, because a small part of her feels like she’s gonna pick somebody who isn’t going to love her back. Playing Bachelorette Lingo Bingo at home? Cross that zinger off.

Ashley and William are off to Vegas, and you know what that means: a private jet and handholding.

Meanwhile, back at the manse, Jeff, who is still masked, has added a wool cap to his look. Because the mask was only a mere symptom of crazy on its own. Ames, both curious and polite, asks Jeff, “Now that we are in 90-degree weather, do you wish you wore a white mask?” Put two points on the board for Ames.

In Vegas, Ashley and William head to the Forum Shops, where they are greeted by excited fans. “Ashley is like a celebrity out there,” says William. You know, he’s right, and for a second we thought we spotted Celine Dion waiting in line for her signature. It turned out to be a poster.

Once they’ve made their way through the crowd, Ashley drags William into a cake shop. But not just any cake shop, a wedding cake shop! “At this point,” says William, “I’m just thinking she’s hungry. She’s starving for dessert.” Okay, so Ashley is looking particularly wee in this episode, but starving for dessert? Oh William.

Next they’re off to pick out wedding bands! We think William finally picks up on some context clues at this point and figures out that his date with Ashley is a surprise Vegas wedding, but we couldn’t hear his commentary over the screaming we imagined “Jeweler to the Bachelors” Neal Lane was doing in the direction of his TV over in Beverly Hills.

Still, emotions are running high. “This is the best first date I’ve ever been on,” blurts William the second he’s been rejected at the altar. “Me too!” says Ashley.

Over dinner in the middle of the fountain at The Bellagio, they get to know each other better. William didn’t go to college, and she doesn’t care! He always wanted to be a stand up comedian! They both had alcoholic fathers who ruined their childhoods! William gets a rose, a kiss, and a fountain show. “My heart is soaring higher than the fountains are,” he says.

Constantine, Ryan M., Chris, Ben F., Nick, Bentley, West, Lucas, Stephen, Blake, Matt, and Ames: In Sin City, Boys Will Be Boys
Instead of heading back to L.A. for her group date, Ashley flies 12 of the guys out to Vegas, then shoos them into the JabbaWockeeZ theater where they—surprise!—are forced to compete for the chance to perform with the famous dance crew and Ashley that night. The guys are split into two crews (“The Best Men” and “No Rhythm Nation”) and told to come up with routines. Think that might be funny to watch? It is! So funny, in fact, it gave us this new show idea: Dancing With the Suitors. Brilliant, right?  ABC, have your people call our people—we’ll set something up!

Anyways, one of the crews performs a mock wedding scene, the other, a mock rose ceremony. Hey, there’s no score for creativity. Bentley thinks The Best Men’s execution is poor. Ryan M. is proud of what they did. No Rhythm Nation gets the gig.

Later that night, Bentley confesses his true (lack of) feelings about Ashley—no, not to her, don’t be ridiculous—to the cameras. “Competing for her—that’s the extent of my interest,” he says. “You know, she’s just not my type.” Perhaps to illustrate just how disconnected these two are in this scene, the wardrobe dept. has Ashley in a neon bikini that you can see through her top and Bentley in a ski jacket. But Ashley doesn’t see clothing! “If you feel something for me,” she pleads, “Please, please, please, please, please, please, please just stick around.” Bentley gets the rose, then wants to “bag this and go play blackjack.” Which sucks, because the jerks on these shows are never as funny as everybody else.

Mickey and JP, Love is a Gamble. I’ll See One of You In Vegas
Mickey and JP have to flip a coin for Ashley’s last one-on-one date of the week. When Mickey wins the toss, JP offers to make him his last breakfast. Remember, this is the guy who shops at farmers markets for his produce. Still, Mickey passes. JP seems pretty bummed. So does the guy in the mask—at least, he does from the tip of his nose down.

But before we can feel too bad for the guys not getting dates, Mickey and Ashley are off to a wine bar in Las Vegas, where they continue to flip a coin to determine everything they do. Heads, they drink white wine. Tales, they drink red. Heads, Ashley goes up to get the wine. Tales, Mickey goes. Heads, Mickey controls Ashley’s wine conveyor. Tales we flip the channel.

They get down to the business of being more “serious” over dinner, which is served in a suite above the Strip. Mickey, who Ashley thinks is gorgeous, gets a rose, a kiss, a lucky coin souvenir, and a private concert by Colbie Caillat for playing. “I hope this is the last first date I go on,” he says. Aw, in that case, we sort of hope so, too!

Time for a Rose Ceremony

After everyone toasts to having a great night, JP pulls Ashley aside so he can flip a coin for a kiss (hey, that’s Mickey’s game!). He gets the kiss, but don’t get any ideas about Ashley, OK? She’s “not the kind of girl that just kisses people.” Before the night is over, Ashley gets in some line dancing with Matthew McConaughey’s long lost brother, some more mask talk with Jeff, a disgusting kiss from Bentley (he thought is was time to “stick his tongue down her throat”)—things like that.

We’re officially down to 15! See you next week.