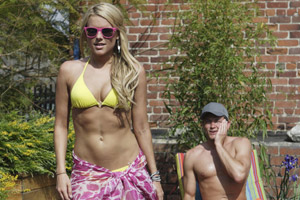 This week, Ali, Frank, Chris, and Roberto head to Tahiti for Bachelorette fantasy dates and the rose ceremony that determines which two suitors will get to meet Ali’s family before she makes her final decision. At least that’s what’s supposed to happen. This being The Bachelorette: On the Wings of Drama, however, things do not go according to plan.

The episode starts off slowly smoothly enough with a five-minute look back at Chris L.’s Bachelorette journey. There he is getting out of the limo. There he is using the word wicked. There he is talking about his mom who passed away. There he is sitting in a group of 25 guys vying for the same girl—it’s heady stuff. “Ali’s not Ali anymore,” he explains to the cameras. “She’s Ali, my girlfriend.”  So what does Chris pack in his suitcase for Tahiti? A hooded sweatshirt and some striped tees. Yep, the world has yet to turn upside down.

Next we spend some time with Roberto, who talks about how crazy his chemistry with Ali is (Jake, he means sexual chemistry). ““I’ve never felt this way this quickly about anybody and it’s awesome,” he says. Beaming, he packs some solid T-shirts, a button down, and a Lion King CD. Yep, everything’s still A-okay.

And then, before Ali could request “open communication,” one more time, we’re with Frank—except he’s not packing for Tahiti. He’s just talking. About himself. Yep, everything’s normal still! That is, until he throws out this doozey: “As my feelings for Ali have grown, these feelings inside me have been brewing for my ex girlfriend Nicole.”  Frank says he can’t sleep. He can’t get his mind off the terrible situation. It’s killing him. Well, it’s certainly not messing with his frequent flier miles. “Before I take one step further with Ali I need to go to Chicago to see Nicole and see if I’m still in love with her,” he tells the cameras—and his tone-deaf heart. “Everything I’ve ever done for love is coming to a point right here in this moment and I need to make a decision. The decision is so difficult because I know somebody is going to get hurt….I’m out of time. I need to do this now.“ No, Frank, you were out of time before you came on a dating show called The Bachelorette. Or, if you want to be literal about things, you’ve got at least one episode left—you’re still on a dating show called The Bachelorette.

What’s the use? Frank’s finally hijacked the show, and to celebrate, he takes us all to Chicago to meet Nicole. After just two knocks, Nicole (wearing yellow, when everyone knows Ali loves yellow!) opens the door of her suspiciously clean apartment to Frank and the camera crew he has in toe. Frank tells Nicole what an awesome connection he has with Ali. She tells him that he needs to come home. (When did these two break up?) They kiss. They cry. They hatch a plot: Frank will go to Tahiti to tell Ali he’s leaving her for Nicole.  Going for a world record in neediness while he’s at it, Frank tells Nicole, “it’s going to take a lot of courage and strength, and I need you to support me.”

Over in Tahiti, Ali, who doesn’t know yet that Frank is the new Bachelorette and she’s not going to get a rose, gets ready for her fantasy date with Roberto by going for a solo swim, which messes up her hair but also puts her in the mood. She picks up Roberto, who manages to make even sweating sexy, of course, and they hug-walk down to the beach where a helicopter awaits to take them to a heart-shaped lagoon. “It’s definitely a sign for me and Ali,” he says, picking her up and carrying her into the water where they hug and kiss and kiss and hug and talk about how much they like hugging and kissing each other.

After sunset, they change (it’s a sparkly mini circa “Oops I Did it Again” for her and one of those button downs for him) and settle in to a private dinner of…wine. “There’s been something that has been on my mind,” Roberto tells Ali. “I spent the last week missing you and… I’m falling in love with you and I just want you to know that.” Ali takes the opportunity to hand him the Fantasy Suite invitation from Chris Harrison. Roberto, turning even redder, smiles, giggles, and says it would be a shame to forgo the couple’s fantasy suite with what seems like genuine surprise at the show’s oldest, and naughtiest tradition (What, it’s a tame show!). With that, they walk through water to the candle-filled suite where Ali takes off Roberto’s shirt and the cameras fades to black.

It’s another day, another bikini for Ali, who welcomes Chris to Tahiti next.  “You’re so far away,” Chris tells Ali, as he walks to meet her. “Is this the longest dock ever?” Despite knowing which nearby island is Bora Bora and some general history of Tahiti, Ali doesn’t know about the dock, so she ignores the question and whisks Chris off to the “most luxurious” catamaran in the area. At sea, Ali and Chris sit and talk and it’s nice—and a little cool. But only until his shirt comes off and they make out on lounge chairs.

Once on shore (Chris does the reverse Roberto, carrying Ali to the beach from the ocean) the couple rips apart unwitting oysters looking for pearls. It’s a metaphor for their relationship, according to Ali: “Give it some time and you could end up with something really beautiful.” Huh.

After an outdoor dinner on the sand, Chris tells Ali how he’s really feeling: “I really see myself with you forever. You know that, right?” Ali answers with a second Fantasy Suite card. “There’s a fantasy suite?” he asks, “I think we’re going to Fantasy Suite 54!” At the votive- and rose petal-filled room, Ali and Chris continue to talk—this time about where they might live together after the show. It’s sweet, and exciting for them, and “really real,” as Ali would say. “God, I love you,” Chris tells Ali.

And then Frank shows up to ruin everything. Without his glasses. (He’s finally seeing clearly.) Frank sits down with community sage Chris Harrison, who is turns out has been having a little Tahitian vacation of his own. “I have to tell you something,” Frank tells Chris, as if the host’s henchmen hadn’t just accompanied Frank to Nicole’s apartment. For his part, Chris is “blown away” by the news, and leaves Frank to confront Ali, who has just finished telling the cameras, “I really miss Frank. I need this day. And I’m so glad it’s here.”

Things go soggy from there. Frank tells Ali they need to talk, then breaks the news that he’s leaving her (and the third fantasy suite!) behind for an ex-girlfriend she didn’t even know existed. Ali cries, the flower tucked behind the ear falls dramatically to the ground, and then, this spec screenplay-perfect exchange ensues:

“How do we move on?” Chris asks Ali at at the rose ceremony the next day. It’s a good question—especially since Frank’s photo is still up in Ali’s suite. Awkward!

After some repetitive business about wanting Chris and Roberto to accept—no, really accept—her roses, Ali hands one out to each of her top two.

“I have high hopes right now that my future husband is still here,” she says. We do too, because after a quick trip to a sound stage for next week’s The Bachelorette: Men Tell All we’re off to Bora Bora to meet the Fedotowsky family. See you there!