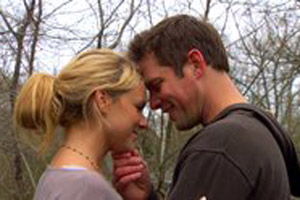 Ali and the guys have traveled to New York, Iceland, Turkey, and Portugal, and now their journey to find love continues—to Tampa, Cape Cod, Green Bay, and Chicago. That’s right, it’s time for Ali to meet the family. Er, the families, “a big step in any relationship.” Or group of relationships. Whatever. That means no pop-ins by Chris Harrison mid show and no date cards this week. Luckily, there’s still a basement full of awkwardness to enjoy. Let’s go!

Back in L.A. after letting lawyer-cum-olive oil wrestler Craig R. go at the last rose ceremony in Lisbon, Ali walks through an unidentifiable field (are those poppies? Weeds?) to wax philosophical about meeting the families of her remaining suitors, then packs what appears to be a women’s shoe department-worth of five inch heels (parents love those!) in her bright red carry on, and is off to Tampa, Florida to visit Roberto. Cue the salsa music!

Ali and Roberto reunite at his alma mater in his and her plaid shirts (blue for him, yellow for her), which they almost immediately rip off of each other. Okay, so Roberto heads off camera to put his baseball uniform on and Ali just sort of puts a jersey on over hers, but judging by the impromptu little pony dance she does when she sees Roberto in his uniform, Ali definitely has undressing him on her mind. “Do you have things that we can play with?” she asks, giggling as they walk onto the college baseball field. Turns out he does have things for them to play with, but to the relief of the American Family Association, it’s just stuff like baseball equipment and a laminated copy of his old trading card. “This baseball card is part of my past, part of where I come from,” says Roberto. “And I’m ready to go ahead and make Ali a part of my future.” Only then does Ali realize that she “knows nothing” about his family.

Oh well! It’s time for dinner (there’s literally not even time for her to change into something less, oh I don’t know, already worn) with Roberto Sr. (dad), Olga (mom), Olga (sister), Paul (brother) and Kristen (sister-in-law).  Over dinner, Roberto’s family asks Ali why she gave him the First Impression Rose back on night one. “I don’t know,” she says, “a feeling?” Hopefully they caught her shoes on the way in.

Later, Roberto asks his mother for her blessing, and Roberto Sr. shows Ali Roberto’s many trophies (Best Looking. Most Charming. Most Natural in a Group on Camera. Best Lion King Walk On…) and sits her down to ask about her “personal goals.” To answer this Hardest Hitting Question Yet, Ali crosses her legs, nods twice, takes a big deep breath, then bunts: “I want to be very successful in my career,” she says, adding, “maybe Roberto and I can even team up and do it together.”  Unfortunately, before we can glean more insight into Ali’s fantasy business plan (would ABC get a cut?), the pageant moves on to the talent portion of the competition: group salsa dancing! And after lots of bumping into furniture in the living room, Ali’s visit to Tampa comes to a huggy end.

Next Ali is off to Cape Cod to hang out with Chris L., his hooded sweatshirt collection, his super loving dog, his super loving family, and his super loving mother’s presence (she passed away from cancer about a year and a half ago). It all starts with a sweet, simple walk on the beach where Chris grew up. Ali’s site-inappropriate knee-high boots sink into the wet sand, and Chris, because he’s absolutely wonderful despite a tendency to say things like “there are whales having sex out there,” doesn’t blink an eye.

Chris’s family of course—which includes his “roommate” dad, his two brothers and the women in their lives—is equally picture perfect. No, they’re really textbook great. As in, they could disarm someone who’s naturally judgmental and looking for ways to gently make fun of them like it’s her job. They sit on rocking chairs on a porch. They eat fresh shrimp. They tell each other how much they love each other—with tears in their eyes!—and they say things like “Love is the only reality” and “Could she be your soul mate?” with straight faces. Are you taking notes, Hallmark? Finally, Chris kisses Ali goodbye—and it’s hot enough for Ali to drop that dreaded F word, friend, once and for all.

But there are two more hometown dates to go, and Ali’s off to Green Bay, Wisconsin to get to know Kirk’s large (and divided) family.  First Ali and Kirk drop by Kirk’s dad place, where—unless the producers employ misleading editing (they wouldn’t dare!)—Kirk’s dad doesn’t say hello as much as push Ali down the stairs into his own personal taxidermy hell/studio. A day late and a shade blinding, even Ali’s yellow rain coat is taken back by the scene: stuffed birds, fish, rodents and even a freezer filled with mushy membranes in plastic bags. Upstairs, meanwhile, Kirk has a rather chummy chat with his little sister on an animal print sofa(!) about what Ali’s reaction might be to Dad’s dungeon. “Maybe she’ll say, ‘Oh, cool.’” she says. It’s more like “Oh, shit,” and after a short but sort-of sweet chat with Kirk’s dad—still in the basement of bodies—about how ready Kirk is for a relationship, Ali and Kirk high tail it over to Mom’s, where they sit down for dinner with his mom, grandma, and sister. Ali, so relieved to be somewhere new she suffers short-term amnesia, thanks the group for “the first home cooked meal she’s had in soooo long.” (Ali: remember the shrimp! Remember the Alamo!). After some nearly nonsensical business about a Livestrong bracelet that once transcended from international symbol of cancer research support to small-town symbol of mold-poisoning survival—and then broke—Ali bids farewell to Kirk and Co.

After one more short flight Ali’s in Chicago with Frank, who lives in Chicago. With his family. In the same house. They meet, jump into each other’s arms, and take off on a boat tour of the city. “Things are back to normal,” she says, right before Frank throws a tantrum about how this whole dating show thing is really hard and difficult, and really difficult and hard. “It’s like a mind game,” he says. No, it’s like The Bachelorette. But Ali’s a good sport. Trying to change the subject, she asks Frank how his family feels about their impending meeting. “I’d love to know what’s going through their minds right now,” he “reassures” her. “I bet their freaking out.”

Things don’t go much better at home, where Frank’s family sort of superficially tells him Ali’s great and he seems “happy” and Frank seethes insecurity and self-pity under his stretched out tank and sweater.  Note: his unhappiness does not stem from the outfit. Ali’s takeaway from Chicago: “I think the reason we both have question marks is because we care so much, and this could really be it.”  No joke.

Finally, Ali and the guys return to L.A. for prom the rose ceremony.

“Thank you,” he tells Ali before getting into the limo and heading back home (and hopefully to his mom’s). “You’ve been my first real shot at doing this.” Well that’s sweet.

See you next week.