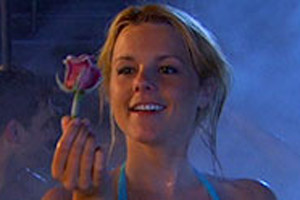 As promised in last week’s “scenes from next week,” episode 5 takes Ali, her nine remaining suitors, and Chris Harrison to Iceland, whereupon landing medical sales rep-sometime cowboy Ty explains, “I don’t think anyone dreams of going to Iceland to find love. But now that I’m here, I’m ready to find it.”

The scavenger hunt of the heart begins with a Chris Harrison “twist” and some friendly competition: the guys must compete for a one-on-one date with Ali by writing her a love poem to be judged by the one-man winning poet selection committee headed by…The Poet Laureate Consultant of the Library of Congress? No of course not! It’s just Ali! So, if you think about it for longer than you should, it’s really just like any other one-on-one date handout, with a writing exercise thrown in for good measure. The guys don’t seem to mind—but that’s possibly only because they’re too cold to. Yep, Sonnets For Dummies takes place outside, where the boys approach locals for help and try to put pen to paper in mittens. (Peanut gallery comment #1: Nice digs.) After what feels like days spent wearing Ali’s fur-trimmed hat, the guys read their poems. Lawyer Craig R. rhymes about wanting to be Ali’s man, screenwriter Frank whines, er, opines about another girl breaking his heart on another trip (beginner’s mistake!), Chris N. memorizes and then recites his poem like it’s a community service assignment, Kasey lets a Loch Ness scarf monster drown out some business about guarding and protecting Ali’s heart, and Kirk compliments Ali’s “rich root beer eyes.”  Surprise, surprise: Kirk wins the date.

And what a date it is! Before you can say “middle school!” Ali and Kirk are off “exploring” Icelandic culture, trying on too-small fair isle sweaters and laughing up a storm in some unfortunate family’s boutique. After settling on matching pullovers, the two sit down for some serious conversation about Kirk’s mysterious past. (Peanut gallery comment #2: What? He’s gay?) Over dinner (and with those terrible sweaters still haunting the frame of every shot), Kirk reveals that he was exposed to mold and asbestos in college, contracted a mysterious illness that even Dr. House could not diagnose, and was eventually saved by his Erin Brodkovich of a mom and alternative medicine. In lieu of actual support, Ali gives Kirk her bug-eye treatment, then calls him an inspiration and awards him the rose. (Peanut gallery comment #3: So, what, she bought and packed every ring from the Banana Republic collection?).

Meanwhile, a group date card arrives back at the hotel (guess the rooms were finally ready!), and Roberto, Chris L., Chris N., Craig R., Ty, and Frank get amped up for a day with Ali. Justin, a truly evil gleam in his eye, talks about “taking Kasey out” on their inevitable two-on-one death date. You know, as if Kasey didn’t already take himself out last week with that whole Aaron Neville tribute. Kasey’s emotional take on the make-it-or-break-it situation? “If I’m not here for love, I don’t know what I’m here for. I’m here to be someone. I’m here to be a man.” Instead of doing the ethical thing (ie: pulling the fire alarm or calling for assistance from someone with a degree in psychiatry), Frank simply tells Kasey “It’s your time to shine.”

The next day, Ali and the guys are off on a Moncler adventure. They ride horses from the middle of an icy field to the middle of another icy field, then go spelunking down a dark hole in the ground that turns out to be an empty cave just as cheerfully as if it weren’t obviously a metaphor for something terrible. Safely across hell the cave, the group arrives at a beautiful Blue Lagoon where Ali, doing her best Chippendale, tears away her snowsuit and jumps into the water in an itsy bitsy blue bikini. One by one, the guys follow, effectively meeting the show’s weekly quota for wet bodies just mid-way through the episode. After some alone time with Ty and Chris L. that has Ali either laughing hysterically or weeping (it’s honestly too close to call) Ali sets off to tell Frank, who just moments ago slipped on his most sensitive cardigan to tell the cameras he was feeling blue, that he needs to “be here fur meee” (Peanut gallery comment # 4: Oh my god, she’s drunk!). Moments later, Ali finds the date’s now-frozen rose, deigns it “just like Beauty and the Beast,” makes a quick run to the bank to cash in the bonus “reference” check from ABC parent company Disney, and hands the rose to Ty.

Things are just as, um, animated back at the hotel before Ali’s next date with Justin, who has had his cast taken off and dumped his crutches in a trash can (don’t medical centers take those things back?) especially for the occasion, and Kasey, who’s now so emotionally rattled he is saying things like “Who knows what Justin will do? Maybe he’ll tell Ali about my tattoo,” as if that really were the worst thing Rated-R could do to him. In the final moments before their “battle royal,” Justin reveals his lack of respect for people extends to the non-living (and Esquire magazine) by dumping all his clothing into a suitcase unfolded. Kasey quivers nearby.

Soon enough, they’re off to “explore the land of fire and ice” with Ali, who has borrowed Jake Pavelka’s black turtleneck to take the guys on a helicopter ride to an active volcano and another ice cave lounge, where Justin and Ali chat privately about how hard this choosing guys thing really is. To the cameras, Justin compares the date to a mental wrestling match where—you guessed it!—Ali’s the championship belt. I spy Gaston! Once again, Kasey quivers nearby, albeit this time he does it outside like an avalanche victim. Or a slowly freezing songbird.

Instead of inviting Kasey into the cave, Ali meets him outside with a cup of cocoa so they can talk. And The Moment We’ve All Been Waiting For arrives at kast! Kasey pulls off his gloves….pushes up his sleeve…and there, still half-obscured by a pesky puffer, is his “guard and protect” tattoo for Ali to see. And see it she does! With her biggest big-eye look yet! Her first intelligible words to Kasey: “Your mom is going to kill you.” Her last intelligible words to Kasey: ““Thank you, Kasey for, um, being you. I think that’s all I can really ask for” and “I don’t want to hold you back here [from the right girl for you]. I want you to go find her.” Let’s hope that the right girl for Kasey is an Icelandic rescue worker, because Justin gets the rose and a helicopter ride back to the hotel. Kasey gets left for dead.

Time for a rose ceremony on ice! Frank pulls Ali aside to “renew” their feelings, Craig R., makes Ali laughs really hard with a fake tattoo he’s drawn onto his wrist (because making fun of the one kicked-off suitor who’s not only emotionally crushed but also presumed dead is just the release Ali needed!), and Chris N. tells Ali about his “fun, silly side,” like how he loves Mexican food. Kirk’s expert body language analysis of Ali and Chris N.: “They may do brunch once a year.” I wouldn’t book the reservation or anything.

Later, Chris Harrison pulls Ali aside for some armchair analysis of his own. “I think you’re afraid to fall in love,” he tells her, blowing her mind. “I am almost positive I am going to fall in love here,” she answers back, breezing over the words almost and positive as if she were on Match.com and not a multi-million dollar production franchise called The Bachelorette. Whatever! Her “matches” are waiting.

And so, after a few kind words about making tough choices (Final peanut gallery comment #5: Like wearing that dress?) Ali hands out her remaining roses.

Hey, at least he gets a limo! See you in Istanbul next week.