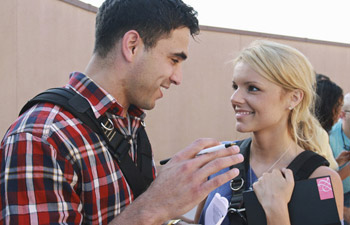 Episode three begins ordinarily enough, with Chris Harrison telling the group of 14 remaining suitors to “take advantage” of their time with Ali this week. If that sounds vaguely ominous and provocative, that’s because it is! But more on people taking advantage of people later. Chris drops off a date card, lawyer-cum-Bachelorette Season 6 Emerging Voice of Reason Craig R. steps forward in his red flip flops to let the room know which lucky bachelor(s) have the first date, and before the Weatherman has time to make an awkward, downcast face, insurance agent Roberto is packed and off for a one-on-one date with Ali.

Love Is a Balancing Act.
That’s what the date card reads, anyway, but no, Roberto and Ali are not off to Chinatown to meet up with Tenley and Jake to make predictable fortune cookie quotations. Instead, they head downtown in a helicopter after Ali tells the camera that the worst thing that could happen on this date is that she could find out Roberto’s not the amazing guy she’s imagined him to be. The worst thing? Guess she got over her fear of flying! Except she hasn’t, and after sort-of sweetly asking the pilot to “stay away from the wires,” Ali lets Roberto be her “man” and hold her hand. Once downtown, Ali, Roberto, and his empty water bottle deplane for a tightrope walk between two city rooftops. Because “life is challenging.” Ali sets the scene for disaster, noting that “like, anything could happen. Something could actually go wrong.” But instead, Roberto pulls her in for a not-so-death-defying kiss and the couple makes it safely to the change of clothes and table for two waiting on the other side. Over dinner, Roberto “continues to surprise” Ali with his fluency in Spanish (first languages are the hardest!), she wows him with her rap wisdom (“Dame un beso.” You know, from this rap song she heard once!) and Roberto gets a rose.

Come Rock My World.
The next day, Kirk, John, Chris N., Frank, Jonathan, Craig, Justin, Jesse, and Chris L. hop into a Hummer limo to meet Ali somewhere under an overpass outside of Malibu where one of them thinks a “gang war” could breakout. No such luck. It’s a music video set for the Bare Naked Ladies and their fog machine. Over the next few hours, Ali and the guys do a little acting: Retail manager Frank acts like he thinks it’s absolutely hilarious to be slapped in the face by Ali take after take, sales consultant Kirk acts like he doesn’t hear the director call cut when he’s kissing Ali in a bed, and weatherman Jonathan acts like a total wimp, letting Ali know that, despite the script (and the evil, gun-wielding director I can only assume Jonathan invented in his mind and then imagined threatening Ali off-screen), she doesn’t really have kiss him if she isn’t ready. Insecurity masquerading as sensitivity? That. So. Doesn’t. Rock. Ali’s. World! But it does throw the other guys into a tizzy. “The general sense,” says Craig R., upgrading his status from Emerging Voice of Reason to Definitive Voice of Reason, “is disgust. Ha.”

At a wrap party after the music video shoot, landscaper Chris L. opens up to Ali about his mother’s passing, Ali kisses Kirk in the hot tub (then gives him the rose), and the Weatherman lets Craig R. steal Ali away before she can answer his request for a more private first kiss. Craig M., meanwhile, is heard cackling somewhere in Canada, drink in hand.

Home is Where The Heart Is
For her last one-on-one date of the week, Ali invites internet account executive and slow-burner Hunter to her house for, judging by the amount of burger patties and hotdogs they end up throwing on the grill, all-you-can-eat BBQ. But before the date begins, entertainment wrestler Justin makes the Big Romantic Gesture of hopping on his one good leg all the way from the men’s pad to Ali’s, stopping only to ask a lone security guard which way to go. (For those keeping score at home, he’s not just a creep on crutches, he’s a man who asks for directions! Zero points.) Ali takes his drop-in as a sign of someone who will do whatever it takes to win her affection, including get hit by a car, and cuddles with him briefly.

Later that evening, Ali and Hunter hang out near the open-flame grill, light a fire, and end up in the hot tub, but their date is cold as ice. “Pretty sunset,” they say to each other flatly in the tub. Or maybe it’s, “This is no fun yet.” Either way. Despite his politely asking if there’s anything he can do to change her mind, Ali sends Hunter home.

At the rose ceremony, tension rises with the stakes. Justin, whose tear-filled, Oscar-worthy speech about wanting true love earned him a measly “cheers bro” from the guys earlier in the night, gets called out for visiting Ali on the DL, and sales representative Steve tries to make up for little time with Ali by wooing her with a blanket, votive candles, a healthy dose of Chapstick and the world’s only c**ck-blocking bottle of champagne (“I got it, my hand’s just a little fragile”).

In the end, Ali must send two suitors home.

In the words of Craig R., “This whole thing’s a test. It’s a test of how much you’re willing to go through for love. It’s a test of mental toughness.” Sort of makes you wish a Dangerous Person was still around.