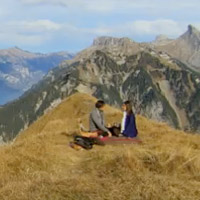 Hi everyone, and welcome to Interlaken, Switzerland, where, now that it’s down to just three women, Ben’s looking forward to inter-lockin’ on back-to-back fantasy dates.

Ben’s ready to take his relationships to the next base, er, level, and he opens the episode saying he’s now motivated to ask the questions he’s been afraid to ask so far. Questions like, “What do you see your week and weekends consisting of? And all that stuff.”

This show (to our slight disappointment) isn’t much unlike other fantasy date episodes of The Bachelors of Recaps Past, so we’ll just put it out there now that tonight has helicopters, candles, people crying while lying in hallways, visitors from the past, (two) proclamations of modesty, and euphemisms for sex galore.

Our favorite: “I wonder if we are going to get to be in the vulnerable state that we both need to be in tonight.”

The devil’s in the details, and this is a recap after all, so we’ll fill you in. Just don’t blame us if this all feels a bit circa Lorenzo Borghese. We warned you.

Ben’s first date is with Nicki, who he takes on a helicopter tour of the Swiss Alps (Helicopter Count: 7. Helicopter Dance Count: 1.) The scenery is stunning, the music is swelling, and Ben and Nicki seem really, really happy. “Relationships can be a wild ride, but who better to have by my side than Nicki right now?” says Ben.

Over a cliff-top picnic, the couple recaps Nicki’s hometown date and make out a lot. Now that Kacie’s no longer in the running for Ben’s heart, we’re starting to fall for Nicki. Ben too!

Only God knows how they get down from that mountain, but they do, and before you could slip into something more comfortable, it’s time for dinner in a candle-filled log cabin. There Ben tells Nicki he wants four kids. Surprise Count: 1. After that, Ben offers Nicki the fantasy suite date card, which she accepts.

Their accommodations? The most romantic fire hazard you’ve ever seen. They get into the tub, throw around the word “love” between kisses, and kick the cameras out.

Ben’s next date is with Lindzi, who apparently forgot to pack her coat and her common sense. Or she’s going for the sympathy vote. Either way, turns out they’re not alone! Ben and Lindzi are greeted at cliff’s edge by a crew that will rig them up so they can rappel down the side of a 300-foot-tall mountain. At the bottom? Bits of rock that didn’t make it down in one piece.

The whole fear-date thing is very Episode 4. That is, until a Julian Assange stunt double turns up on the rig staff. Turns out the Wikileaks founder may have been hiding out in Switzerland last year after all! Surprise Count: 2.

Once their feet are back on the ground, Ben’s feelings for Lindzi are stronger than ever. Then he changes into a bow tie for dinner.  “I’ve loved watching you open up,” he says. “I absolutely know for a fact that I really like you,” she replies.

Then Ben offers Lindzi the “key to his heart.” She doth protest. She doth accept.
“I see myself with her for the rest of my life, I really do,” he says.

On his third day of vacation, Ben meets Courtney for “a very Swiss date.” They ride a train, buy some bread, and play Hey Cow, which consists of yelling at a cow to see if it will turn around. It’s life changing for everyone in that none of us will get that ten minutes back.

When they’re not confronting wildlife, Ben and Courtney talk about her inability to get along with the other women. “I tried really hard to be nice with them, and, yeah, I don’t know,” she says.

The tough conversation continues over dinner. Ben tells Courtney he has lots of female friends (Surprise Count: still at 2) and is close with his mom and sister and is looking for someone who won’t have a problem fitting into his life.  “I see where you are coming from and I respect that,” she says, before adding this gem of a compliment, “I want normal in my life, and you are that.”

Whatever. They make their way to the fantasy suite, which is a super cozy cabin outfitted with a two-seater hot tub. “Ben is the best ting that has ever happened to me,” she says.

By morning, Ben feels confident that all his concerns are laid to rest.

Not so fast, Flajnik!

Kacie’s back to get something off her chest (and spend some more time away from her family). Once she gets over the shock of shocking Ben, Kacie spits out why she’s in Switzerland: She wants to know what went wrong. “I felt like we were worlds apart in where we come from,” explains Ben. “Two wonderful families, but different backgrounds. I don’t think that I could have given you all of the things that you needed from me, because that’s not how I saw my life going.”

“It’s nice to have answers but it doesn’t make it any better,” says Kacie, unaware that she just unlocked the great mystery of life.

“Because I do love you and I do care about you, I don’t want to see you get heartbroken again,” she goes on. “I feel like if you were to chose Courtney you would get your heart broken.” Ben says he would LOVE to hear why, except he looks absolutely crushed. Especially for a guy who just got lucky three nights in a row with three different women.

Luckily Chris Harrison is there to talk things out once Kacie has said goodbye again. “I can see you’re conflicted tonight,” says Chris. Yeah, well, turns out Ben would rather be alone with his cameramen. He looks out the window, he looks at the framed photos of the women, so thoughtfully set up wherever he goes, and he mugs.

Time for a rose ceremony (the last!)
Grab the Tums, it’s a doozey.

Nicki’s heart is broken. Ben has started to have doubts. We’re not feeling so hot ourselves. But you can’t find love if you don’t put yourself out there week after week –at least, that’s what The Bachelor says.

See you at the Matterhorn in two weeks!