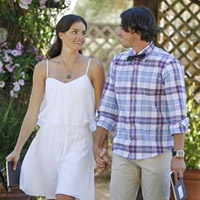 It’s that time of the season, everybody: time to meet the families. Just eight weeks ago Ben met 24 single ladies and one grandmother of a single lady at the Bachelor mansion in L.A.—nearly ten helicopter rides and countless date cards later, he’s visiting Lindzi, Nicki, Courtney, and Kacie in their hometowns for final dates before he narrows things down further with fantasy dates and suites and shared rooms and… wait—we’re getting ahead of ourselves. And that’s no way to make a thoughtful, serious decision about something as serious as marriage. Let’s agree to take this thing one hometown date at a time, OK?

First up, Ben visits Lindzi in Ocala, Florida. She’s happy to be home and excited to be bringing her “boyfriend” to meet her parents, or as they call themselves, “the old people.”

Ben meets Lindzi on a farm with some of the prettiest horses we’ve ever seen. “I could see myself falling in love with her,” he tells the cameras, out of earshot. Well, this ain’t the dress rehearsal, Ben. Let’s go!

After meeting up, Lindzi takes Ben for a ride in a horse-drawn chariot, then off to the side of the track where they share a picnic lunch and some relationship history talk. “Her telling me that she’s had some heartache and experienced loss… Lindzi is really opening up!” says Ben. Again, this isn’t the dress rehearsal.

At least Lindzi’s thinking more long term. “I hope today is the last day I ever have to bring a guy home to meet my family,” she says. After lunch, it’s back to the chariot for a ride over to meet mom and dad . Turns out, it’s awkward meeting people from inside a horse carriage! Do you hug? Or shake? Fall out of the carriage altogether? Ben opts for all of the above, and by the time we stopped cringing, everyone was down on the ground safe and sound.

During some small talk about what Lindzi and Ben have been up to this far on the show, we learn that Lindzi’s parents wed in the exact same City Hall where Ben and Lindzi had their first date in San Francisco. This is apparently something Lindzi never knew, or forgot, or pretended not to have known, because she seems very surprised to hear it. Still, everyone agrees it’s a fantastic (hitherto unknown) coincidence.

Time for a Ben Hur reenactment! (Bet you never thought we’d be typing that sentence in a recap). The Old People win the chariot race, but Ben crosses the finish line gingerly holding the family dog under one arm, so that’s worth about an extra million zillion points, if you ask us. Because they lost the race, Lindzi and Ben “have to” pull her parents and their chariot back to their house for dinner. It looks uncomfortable, but only in a physically, so, so far, so good.

Back at the house Ben talks with Lindzi’s mom about her bad breakup with an ex and to Lindzi’s dad about possibly maybe potentially asking her to marry him—one day. That last part goes only OK, but Ben’s encouraged. “My dad was salt of the earth, and I think Harry is salt of the earth,” he says, making us, dare we say it, mist up.

After saying goodnight, Ben is feeling great. “Lindzi’s humble, she’s grounded, and I like that!” Ex boyfriend, eat your heart out.

Next we’re off to Clarksville, Tennessee, where there are more farm animals and Kacie B. Ben meets Kacie in an open field, where she’s assembled the town marching band and drill team for a Welcome Ben performance, then runs into Ben’s arms with the signature Bachelor contestant leg-wrap hug. We were wondering when that would get pulled out!

Turns out the field is actually named after Kacie’s grandfather, who was very involved in the community and loved her grandmother very much, which inspired Kacie to no end.

After some niceties, winemaker Ben asks Kacie if there’s anything he should know before meeting her parents. Yeah, there is: “Dad is a federal probation officer, and we don’t drink.” Ha! Well, Ben doesn’t have a criminal record—that we know of—so this will only be half totally uncomfortable. “Don’t be nervous!”

Soon enough we’re home for dinner with mom Martha, dad Denny, and sister Allison, who Kacie says knows her better than mom and dad. After a tense-looking meal, Kacie steals away for a few minutes of girl talk with her sister. “I haven’t had the easiest time being myself around people,” she says, “And I don’t have to do that now… I’m so flipping happy.” Except, if we’re being honest, she looks really bummed.

Meanwhile, Ben has a heart to heart with dad. Here are just a few of the things that are said between them: “I do value the sanctity of marriage,” “I don’t want to see anybody get hurt,” “One of my fears is I don’t make the right decision in the end.”

Ben stops by to talk with mom next, but things don’t go any better there. “I would be disappointed” if you lived together following the finale, she says.

The interactions, which go over like a bucket of cold water to the face, leave Ben unsure how to feel and Kacie feeling frustrated. “Today was supposed to make my relationship with Ben much stronger, and right not I feel like it’s doing the exact opposite,” she says before kissing him goodbye.

Then Ben’s off to Ft. Worth, Texas, where there are even more animals! (National Geographic Wild, are you getting this?) Ben meets Nicki in town, and she looks as upbeat and happy as we’ve seen her. Before dinner they go shopping for cowboy boots (he’s always wanted a pair!), pick out ten-gallon hats, stop into a saloon, and run into Yosemite Sam. OK, we made that last part up, but we’re sure it came thisclose to happening. What really happens is they make out for ten minutes then hit the road.

Around sundown they arrive at Nicki’s parents’ place, where we meet mom Laura, dad Doug, and brother Matt. Mom and dad are divorced, but they get along great, so both get to meet Ben, who is comfortable enough to have his hand on Nicki’s thigh while everyone gets to know each other.

After dinner, Nicki tells her mom how much she’s feeling for Ben, and the two squeal like excited sisters. Aaaah! Then she talks things out with dad, but he’s a little less enthused. “I too readily offered your hand in marriage the first time because I have such complete faith in your judgment,” he says, “but now having seen how that relationship ended maybe I could have asked a few more questions, so I’m sorry if I let you down, and I don’t want to do that again.”

The exchange was enough to make us misty—again!—and voices were starting to get nasaly and crack, so we looked away for the next few moments. It’s safe for you to assume things ended well, because everyone looks happy again over a dinner, and dad offers his blessing. Even Matt says he “actually likes the guy.”

Nicki’s in love and she pulls Ben aside to tell him so before he leaves. And Ben’s seeing stars, too! “Today there were moments when I looked over and thought, I love this girl,” he says. “I have great gut feelings about Nicki and her ability to make me happy.”

If it was up to us, the show would stop right here, but Ben has one more hometown to visit: Scottsdale, Arizona, where Courtney’s family lives. We’ve got half hour to go, so fine, we’ll tag along, but we’re not happy about it, OK?

Before Ben shows up at her family’s home, Courtney reflects on her last eight weeks. “I’m just so happy to be aware from the girls,” she says. Of course she is. “Today’s really vital in figuring out if this is a woman I could spend the rest of my life with,” says Ben, “I don’t want to marry someone who rubs people the wrong way.”

Before spending some time alone, Ben and Courtney enjoy an outdoor lunch with her mom, dad, and sister. “I like/love him,” she says of Ben, who seems unfazed. Courtney’s mom isn’t sold on it, but her dad seems really accepting.

“Marriage is life’s greatest gamble,” he tells Ben after lunch. “Are you ready to make that bet, Ben?” His answer: “I’m ready to be in a serious, committed relationship.”  Well, good, and never mind he totally avoided the marriage question, because Courtney’s dad wants some grandkids!

Later in the afternoon, Courtney takes Ben to a nearby park where she had one of her first photo shoots as a teen, and where she has set up a wedding ceremony—for the two of them today! “This is the best way to show Ben how I feel about him,” she says. Convinced.

Then Courtney pulls a Mary Poppins, taking a bow tie, a notebook (for writing down vows) and rings out of her purse. Ben very sweetly goes along with it, and even writes down some nice things about Courtney (she’s sexy!) and walks her down the aisle to where a pastor (or maybe just a crazy person Courtney found in the park! We don’t know!) is waiting to perform their marriage.

To our astonishment, Ben reads aloud the “vows” he just wrote for Courtney. And they are good! They are really, really good! Getting a guy you “like/love” to enact a marriage to you under duress? Brilliant.

“Ben,” she says, “I want to love you and treat you right, every day and every night. … I want you to know that I am in love with you.”

“Standing up there with Courtney felt pretty natural,” says Ben.

We’d offer a mozel tov (really, we would), but this thing ain’t over yet, and it’s time for a rose ceremony.

Now that his dates are over, Ben meets up with Chris for a little recapping of his own. “This is the most difficult decision I will have to make yet,” he says. You know what? We believe him.

Says goodbye: Kacie B., who remains classy and graceful (until she gets in the limo at least), and is brokenhearted, and going to make the cutest Bachelorette in a few months, don’t you think?

We’re headed for an Alpine adventure in Switzerland. See you next week!