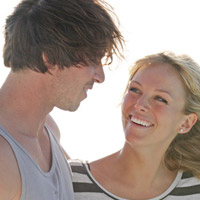 Welcome to Belize, everybody!

Ben’s here with six special women, or, as Emily puts it, five women “and a shark.” For those of you not keeping score at home, this week is big—BIG!—because next week Ben will be taking just four of the women (or three women and a shark) home to meet their families. So, this week is almost as big as next week. Like every week.

The first one-on-one date goes to Lindzi, who couldn’t be happier to spend a day with Ben. Ben picks her up wearing a tank top, which is forgivable, but only because he takes it off very quickly. Then they’re off on a helicopter ride to a gorgeous coral reef, where they must jump out of the helicopter into the deep, romance-filled waters below (Helicopter Count: 6!). Shocker alert: Lindzi is afraid of heights, so taking this “leap of faith” with Ben to her likely death is occasion to hold him tight and kiss him lots and appear generally vulnerable. Everyone wins.

Except Emily, who, left behind at the hotel, feels “like someone gave me a slice of cheesecake, and then someone came over and took my cheesecake and said bye-bye, and walked off. With my cheesecake. In swim shorts.”

Anyway, thankfully Lindzi and Ben survive their jump and feel closer than ever once they hit the water.  “I fell for Ben out of a helicopter. But I’m also falling for Ben,” says Lindzi.

Later that night the couple celebrates being alive with a candle-lit dinner at the end of a candle-lit pier. It’s beautiful and dreamy, and we have absolutely nothing snarky to say about it whatsoever. (Honey, are you reading this?)

Ben and Lindzi are feeling the love. “I feel like if you and I continue down this path of every date being better and better, it’s great,” says Ben, reminding us that good is good. “Absolutely,” agrees Lindzi.

There are no roses on the one-on-one dates this week, so instead of giving and receiving a rose, Ben and Lindzi close out their ight by putting a message in a bottle. “It’s so romantic and sweet,” says Lindzi, forgetting momentarily that gorgeous coral reefs fare better without poluttion.  Together they write a fairytale (what, you took them for the tragicomedy types?) about a man named Ben and a very pretty woman named Lindzi, which turns out to be about a fictional couple but also sort of about their real life selves. The story ends with the man giving an eternal promise to… always be truthful with the woman. It’s enough for Lindzi, and Ben’s very sweet and open with his feelings. “I feel like I’m falling in love with this woman,” he says.

Do You Belize in Love?

The next one-on-one date card is for Emily, and she and Ben spend the day riding bikes, holding hands, doing some shopping, and crashing a locals basketball game—you know, totally cute, normal tourist date behavior except that last part.

When they stop by a fisherman’s boat to grab some lobsters for dinner, they’re told he’s fresh sold out but that they can join him on a quick trip to pick up more. From the ocean.

Watching Emily and Ben dive for lobsters may not sound like award-winning TV, but in actuality, it’s riveting. Did you know lobsters are caught with a hook by their tails? Did you know divers wear gloves to avoid getting pinched (or worse)? Did you know that when you dive for and catch lobsters they magically appear cooked on your dinner plate later that night? These are the things we learned during this particularly informative segment.

Despite the experience, Emily isn’t perfectly at ease. “If only my boyfriend didn’t have five other girlfriends this would be a perfect day.” If only!

Back at the hotel, Courtney is feeling just as anxious. She cries, sighs, says her feelings for Ben are now in the past, and takes to her bed—and we all already know what happens when sharks stop moving.

Meanwhile, Emily and Ben go dancing at Lizard Bar, where his feelings really deepen. “I could see myself loving this woman,” he says. Around this point we realized we cannot be entirely sure the lobsters they caught are the lobsters they ate for dinner. Just saying, to be clear.

Feeling her out, Ben asks Emily how she’s feeling about the idea of bringing him home to meet her family. “What really bugs me about the thing with Courtney is that we lost some time there, and it was time we could have spent talking about us,” she says, making that exact mistake all over again. But Ben understands, and he “proposes”… a toast! “You are a beautiful woman and I am really happy to be here and I had a wonderful day,” he says.

Let’s Take the Next Steps In Our Relationship

Luckily—for Ben, apparently—Courtney gets the final one-on-one date of the week, a fact that doesn’t go over well with the other ladies. In fact, it turns Kacie B. downright sassy. Hurrah!

On their date, Ben takes Courtney to see an old temple in the forest. “Is this where they do the human sacrifices?” she asks. And where’s Emily when you need her?

Courtney and Ben agree to climb the stone stairs to the top of the temple, but all she can think about is how she’s not sure she wants to  bring him home to meet her family.  On a landing, she lets Ben know how she feels.

“I lost the spark babe,” she says, nonchalantly,

Ben is clearly hurt, but he tells Courtney he respects her honestly and takes the opportunity to reassure her of his feelings. “In those group dates I noticed you, I did,” he says. (To be fair, she was doing things like this.) Ben says he recently realized that he “wants a woman with a little bit of edge. I want someone who is a little bit weird. I don’t know how to put it.” Let us try: Self absorbed? Insensitive to others? Not for us? No? OK, we tried.

At the top of the temple, Ben experiences a moment of clarity. He thinks of how proud his late father would be of him, and then he sees Courtney sitting next to him and thinks, “I see my life with this woman. Today, I felt certain.” Gulp.

The situation is a little hairier over diner, when the topic of Courtney’s relationships with the other women comes up.

“Have you tried to get to know them?” asks Ben.

“100%” says Courtney. “But I’m so bored by them. These aren’t women I’d be friends with in real live.” And, because she has an uncanny knack for irony, “They are really into themselves.”

She even points to her career as evidence of her own good nature. “I’m the talent,” she tells Ben. “I have to make everyone happy.” We looked it up, and that’s not exactly in the job description for model, but Ben’s buying, so we’ll go ahead and buy too. (Hey, we wont find love if our hearts aren’t open.)

After her date, Courtney’s feeling more like herself. “Kill shot,” she says. “Game over. The other girls can pack their bags. But I don’t want to get cocky.”

Let’s Sea Whose Family I Will Meet

It’s finally time for this week’s group date, and it goes to Nicki, Rachel, and Kacie B., who apparently spent the day before tanning and straightening her hair. Looks good! Ben wakes the ladies up at four in the morning, and by sunrise, they’re ready to go… shark diving.

“Oh F— me.” That’s what Rachel says when she finds out the activity for the day because—you guessed it!—she has a phobia of sharks. (Not just the human kind).

As if the single rose on this date weren’t pressure enough, Nicki spells out just how important this date is. “This is a crucial date,” she Nicki. “He’s making crucial decisions” It’s crucial people!

Like those who have come before, Rachel overcomes her phobia for her Bachelor. After a few swims around the reef, the group is off for some sunning and mixed drinks at the hotel pool, where each of the ladies tell Ben how much they’d like to take him home. Ever someone we totally want to be friends with, Kacie tells Ben she’s falling in love with him! While she has a big tropical red flower tucked behind her hair!  And she gets the rose!  We love this show!

After that, Rachel, Nicki, and Kacie warn Ben to be cautious with Courtney. He takes their concerns in stride and applies some more Banana Boat 15 (we hope!) .

It’s dark out, tiki torches are lit, and the tribal drums are thumping. This can only mean one thing: rose ceremony!

Of five women, only three will be getting roses. So who is feeling good? Courtney! She “has a pina colada, she’s in Belize, she’s had a relaxing day…” Hey, you can’t say she’s hard to please.

Emily and Rachel aren’t feeling as confident, and Kacie seems to have befriended an undeserving frosty pink lipstick that was out to get her. But mercy is near: Ben’s mind has been made up, and there will be no cocktail party tonight.

Once the girls have lined up, Ben arrives to pull Courtney aside for a quick chat, during which he asks her if she’s “really in this.” She says she is, and that they “can make each other really happy.”

“I just hope there is enough time left for Ben to see who Courtney is,” says Emily, wiping the tears from her face. Us too, us too.

See you for hometown dates next week!