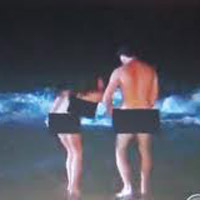 Hola! And welcome to Vieques Island, Puerto Rico, where Ben is down to 11 women, eight of which have names that end in the sound “Ee!” Make of that what you will.

It’s going to be a great week, not only because Ben’s relationships are getting serious (read: tensions are at an all time high) but because each of the girls will get to go on a date. “No one is going to feel left out,” says Ben without the slightest hint of irony—or intelligence.

Things get off to an intriguing start. The group is greeted at the shore by island locals never to be introduced or heard from again. Yes, it’s pretty clear they’re hotel or show employees, but still, the mere suggestion that this could be the start of a psychological travel thriller really ratchets up the excitement.

Unfortunately, the situation dissolves from Lost to Kindergarten Cop pretty quickly. with Emily and Courtney complaining about each other to the cameras. “It’s like, you wronged me. There’s nothing really you can say to recover from that,” says Courtney. “You better check yourself, bitch.” Oh yeah, she’s wearing a shirt that says BE NICE.

Chris Harrison’s apt advice this week: “Try and enjoy this.”

The first one-on-one date in Puerto Rico goes to Nicki, and to celebrate (or host a limbo contest on the lido deck) she pulls out a bright, colorful one-shouldered mini. After a quick flight to San Juan (Helicopter count: 3) Ben and Nicki stop to buy some shaved ice. “It’s like God is smiling down on us,” she says. Then it starts to pour. So much for God. Still, Nicki ‘s positive attitude can’t be dampened. “Nothing can rain on this parade,” she says. Except, it is raining, like we said.

Details, details. What Ben really wants in a woman is “flexibility,” and Nicki’s got it. They spend the afternoon shopping for new clothes, which means another colorful handkerchief dress for Nicki and an all white linen outfit for Ben, complete with a white fedora, which she is really, really nice to him about. Outside a church, the couple comes across a wedding procession, which turns the conversation to marriage. “You have a little bit of experience, right?” says Ben. Um, right, she’s divorced, if that counts.

Nicki opens up over dinner and Ben likes learning things about her, so she gets the rose! “I am more ready for my second chance at love than I thought I would be, “ she says.

Diamonds Are a Girl’s Best Friend
Lindzi, Courtney, Jennifer, Kacie B., Emily, Rachel, Casey S., Jamie, and Blakely are on this week’s group date, which is a private workout at Roberto Clemente Baseball Stadium. It’s all pop flies and good times—until Chris Harrison arrives to let the girls know they’ll need to compete against each other to attend a beach party with Ben planned for later that night. Because there are nine women, Lindzi gets to play for both teams. But not in that way.

All of a sudden, the date is “crazy competitive,” complete with slides, scores, and chest bumps. Oww. Turns out Blakely’s pretty great at bat and in the field. “Who knew strippers could play baseball?” says Courtney. Double oww.

In the end, only one team can win, and the red team (Courtney, Kacie, Casey, Lindzi, and Rachel) takes the prize. The blue team? They get a bus ride back to the hotel and the chance to ice their muscles.

Before we can google A League of Their Own (good flick!) there’s a chopper overhead (helicopter count: 4).  It whisks Ben and the winners off to the beach, where he spends some quality time alone with Kacie B. Curled up on a hammock, Kacie does something truly shocking for a contestant on this show: she asks The Bachelor about himself. “My previous relationships have been interesting,” he says. “All of the women I have really fallen for in my life have not loved me back.” The moment is sweet and genuine and grounding, and when Kacie B. gets the rose for being a good listener, all is right in the world and in our hearts!

But not for Courtney. Her soul runs on evil, so she takes the opportunity to steal Ben and plant an idea in his mind: skinny dipping.

Forget helicopters, Ben picks up Elyse for her one-on-one date with a yacht (“That thing is so big!”). Cue the sweeping music, we’re hitting the high seas. On the boat, Ben and Elyse talk about each other indirectly, saying things like “I want that with SOMEONE” and “when I meet the RIGHT PERSON.” It’s as impersonal as first dates are in the real world, and things don’t ever take off from there. Despite Ben putting on a three-piece suit and bow tie for a private dinner on the beach, he decides to let Elyse go. “From the moment you got out of the limo, I was intrigued,” Ben tells her. “I was hoping for some things today that I just didn’t find. I think that my relationships with a lot of these other women are so far passed what I think we could probably get to if we continue this. Unfortunately I can’t give you this rose.”

Elyse is devastated to be sent home, and Ben seems hurt by the breakup, so the next few minutes are a little gloomy (David Gray’s This Year’s Love doesn’t help).

Luckily for ABC’s ratings, Courtney knows just what Ben needs to cheer up. Looking certifiable, she drops by Ben’s room in her robe and armed with lotion. “Why not? Why the hell not?” asks Ben. We can think of nine reasons, not counting health and safety standards, but to no avail. He’s off to the beach with Courtney and a bottle of wine.  Clothes come off, bodies run into the water, and… an Olive Garden commercial never had such a good lead in.

At the week-end cocktail party, Courtney uses her secret experience with Ben to bait the other women, stopping just short of blurting out “we did it!” It’s tasteless and reeks of insecurity, so perfectly within character.

Meanwhile, Blakely tells Ben how she’s feeling about him (strongly!) and Emily repeats her concerns about Courtney (he tells her to “drop it”).

See you in Panama next week!