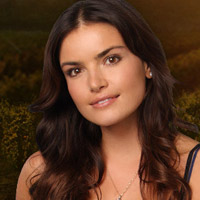 We’re in Park City, Utah this week, and everywhere Ben looks, it takes his breath away. Granted, it’s gorgeous. And the Helicopter Count? 1.

Ben’s down to thirteen women, which is good because he’s “really ready.” (“Ready for a haircut,” says my sister-in-law.)

We’re at Canyons Resort, and Chris has some advice for the ladies: “If and when you get time with Ben, use it wisely. Don’t sit around and talk about the weather.”

Rachel gets the first one-on-one date this week, and it includes a helicopter ride (2!), a canoe ride, and a private dinner in a yurt. Despite the numerous modes of transportation hired, Ben and Rachel aren’t getting anywhere. “Wow it’s nice,” she says, looking around their “private lake.” “It’s so nice,” he says. Once everyone is clear and on the same page about the local temp, Ben and Rachel kiss.

Back at the hotel, Kacie B. is having a tough time dealing with the competition. “I wish it were over and done and we were going to the grocery store right now,” she says. So now we know who the one person who would rather be at the grocery store than Canyon Resort is. Later, she and Monica cuddle up on a couch—one that looks suspiciously like a therapist’s bench—to talk about how devastating it that Ben is on a date with someone else. Or, at least how devastating it is to Kacie. Monica seems perfectly happy at home with the ladies. But you know, this isn’t what they were expecting. They didn’t think they’d feel this way. And two plus two equals five.

Out in the Forest of Stalled Conversation, Rachel and Ben enjoy a picnic lunch of champagne and awkward silence. “God it’s nice out here,” says Ben, “looks like that’s a beaver dam.”

Over dinner, Rachel finally opens up—you know, about not really being able to open up. Ben’s so touched by the admission/relieved not to be the one doing the talking for a minute that he gives her the rose!

In the morning, Ben takes eight ladies for an outdoorsman double header: horseback riding (Courtney: “watch out for poop”) and flyfishing “to catch lunch.” OK, so they don’t really have to kill for food, but seeing the women waist-deep in water makes it seem like a survivor sport nonetheless. It’s about as exciting as watching someone flyfishing, until Ben gives Kacie a little one-on-one time with her rod.

“Any nibbles?” he asks the group. No, Ben, no nibbles.

Later, Ben spends some time with Courtney, who kills a Nemo with a single dirty look when Ben has his back turned.

At the party, Ben spends some alone time with Casey S. (So THAT’s who that is.) And actually, although we couldn’t have picked her out of an old Bachelor contestant lineup, we learn a lot about her and Ben during their chat. For example, she’s had two serious relationships. Ben has been in love four times. But before we could fill in the blanks for “type” and “idea of a perfect date,” Nicki steps in to tell Ben about her boss, who just recently passed away, and about the lesson she took away from his death (live everyday like it is your last). Turns out Ben just lost a friend too, so this turns into a “lasting moment.” Carpe Diem. Kiss, kiss.

Before Ben can wipe his mouth, Samantha cuts in to give Ben a piece of her mind. What’s on her mind is the fact that she’s been stuck on group dates. What’s with that? Ben’s response is sobering, literally. After telling her he doesn’t think she’s taking this thing seriously, Ben tells Samantha, “I’m thinking we should probably end this right now. I do.” It’s not the I Do she was hoping for, so Samantha’s off in a flurry of tears and shock.

Once that snafu is dealt with, Ben takes Kacie B. for a walk… to his room, where they cuddle and kiss and talk real close. At the risk of letting you all down, we have nothing snarky to say about it.

But Courtney does. She can only take so much, after all, and Ben’s connection with Kacie is putting her on edge. “I’m like, don’t poke a bear,” she says.

Her next move? To pretend to Ben that she’s in desperate need of reassurance and pulling a Bachman by talking to the corner of the room. We’d give her a Razzie, Ben gives her a rose. Then Courtney drops the first clue that she may be related to Charlie Sheen. “Winning!”

Jennifer gets the next one-on-one and it’s a doozey. Although (because?) she’s afraid of heights, Ben takes her repelling down a 300-ft crater. He hopes she’s “willing to take this plunge” with him, and she is!  After their big jump, Jennifer thinks she’s falling in love. We think she might have hypothermia. For her bravery, she gets the rose, and a Clay Walker concert put on for Ben, and Jennifer, and a few hundred total strangers in a nearby field. The whole scene is as weird as it sounds, but Jennifer is clearly thrilled—and she’s not Courtney—so that’s cute.

Meanwhile, back at the hotel, Courtney seems to have stolen Kacie B.’s knit sweater, which is something we felt concerned enough to note but not enough to investigate because in the next scene we find out Blakely’s giving Emily highlights in the bathroom. Nothing like a mutual enemy to put an x-rated romper in the past!

Time for a drink. Chris Harrison calls the women together for this week’s cocktail party, and we’re pleased to see them finally out of their Victoria Secret Pink wear.

Emily doesnt want to see Ben get hurt again (or spend another minute with Courtney), so she uses her one-on-one time to tell him how she feels about the model. Judging Ben’s reaction, she’d have done better talking about the weather. Did we mention the sky is crying?

Courtney gets wind of what’s gone down, and she doesn’t take the news sitting down. She defends herself to Casey S., then sets the record straight for the viewers: “I’m a nice person. Don’t fuck with me.”  Consider the bear poked. Once she’s gotten that off her chest, Courtney and Casey S. move inside to have the exact same conversion within earshot of Emily. Face twist, eye roll, face twist. Face twist, face twist, face twist, nose twitch.

Thank the lord, Chris Harrison is back.

And we’re off to Puerto Rico! See you next week.