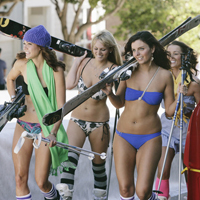 Hi guys! Have a good week? Hope so. Ready to jump into the middle of this episode? Really hope so, because due to technical difficulties we’ll be kicking off this week’s recap a half-hour into the show.

From what we could gather, the first thirty minutes included a one-on-one date with Emily. And it went well! Or at least well enough. She’s still around when our feed finally kicked in during what appeared to be a Honda CRV commercial but was actually Ben and the gals heading to this week’s group date: snow skiing down the hilly streets of San Francisco. It’s 85-degrees out, so instead of covering up, the aspiring models, er, women strip down to their bathing suits for a couple of runs down a (green circle) street-slope. It’s as cringe-worthy as it sounds, and made odder still by the fact that a giant Coors train doesn’t come barreling through the set. Kacie B., a newbie to skis, asks aloud the question we were thinking: How do you make it stop? But stop it doesn’t, and the next clip is one of Kacie sliding downhill butt first.

The humiliation-a-thon continues later that night at the hotel’s tiki bar, which we admit is pretty cool. In fact, we saw it earlier this week on Anthony Bourdain’s travel show, The Layover. From what we can tell, the foodie grump wasn’t filming at the bar on the same night as Ben and the ladies, although that would explain why Anthony seemed happier than he has in years.  But we digress.

After settling in, Ben takes Rachel on a walk so they can fawn over each other and make out. “I didn’t know how funny you are,” she tells him. Granted, getting dumped on live TV doesn’t typically bring out someone’s sense of humor, but still. Ben rewards her backhanded compliment with a kiss.

Brittney, Let’s Unlock Our Love With the Key to the City

At about this time, a date card arrives upstairs, where Lindzi, Jennifer, and Brittney are chilling. It’s for Brittney and comes with a gift, a necklace with a diamond-studded key-shaped pendant designed by Neil Lane. Very RHOSF. Brittney is shocked. Instead of feeling excited, she’s “torn and confused.” But this is a journey to find love, not a Natalie Imbruglia song, so she has some thinking and funny face-making to do.

Back at the party downstairs, Ben takes Kacie B., (and their drinks) outside so she can vent to him about how hard it is to see him make connections with the other girls. Ben “doesn’t have any words to console her.” So they make out, too!

“There’s something about Kacie B.,” he says, “She sparkles.” That’s what you call a sequined dress, Ben, but we approve.

Meanwhile, upstairs in Doubtsville, Brittney doesn’t know if “this is really for her.” After everything she put grandma through, Brittney follows her heart—right out the door.

Before she can leave the building, Brittney has to find Ben to say goodbye. She does it with her carry-on at her side. TSA, give this one a point for not leaving her luggage unattended! Brittney thanks Ben for the opportunity and tells him that she’s leaving. His response: “Say Hi to your grandma.”

But it’s not as if Ben doesn’t take Brittney’s departure to heart. It makes him realize that “any of these women could leave at any time.” Um, we certainly hope that’s in the contract.

The group-date rose goes to Rachel.

Lindzi, Your First Impression Was a Lasting One. Let Me Show You San Francisco At Night.

What would have been Brittney’s one-on-one date goes to Lindzi, who couldn’t be happier to fill in. She and Ben ride a trolley to City Hall, where Ben pulls out a key. WHICH REMINDS US. Brittney didn’t return her key-necklace gift! No wonder she kept her luggage at arms length and ran. Ben’s key does the trick, and he and Lindzi make it inside to enjoy a private concert and kiss fest. It’s cheesy and awkward, but they actually look pretty smitten.

Next, they’re off to a private dinner in a secret room (behind the bookcase!) at a neighborhood speakeasy. Hey San Fransicans, the password is Storm Horse! Ben asks Lindzi his favorite question: Why are you still single? Lindzi answers with her story of getting dumped via text, and Ben’s so caught off guard he turns his head and giggles. “Here’s to laughing at ourselves,” they toast. Or each other!

Lindzi gets the rose, a piano lesson from Ben, and more dancing.

It’s the end of the week, and Ben looks really happy. He’s starting to have relationships and says things are looking up. Cue the drama!

Ben spends a little time with Jennifer and tells her she’s the best kisser in the house (gross), then checks in with Elyse, who’s feeling a little forgotten.

Courtney, charming as ever, picks a fight with Lindzi before telling the camera it’s time to “trim the fat!” It’s a metaphor, sure, but she’s a model, and a bit of a sociopath, so we’re pretty sure she’d actually like to trim some fat. Still, Ben plays the JFK to her Marilyn Monroe by taking her up to the roof to tell her he has been thinking about her all week. Things feel almost normal.

Then Shawntel, the funeral director who came thisclose to winning Brad Womack’s heart on the last season of The Bachelor, crashes the party.

Ben greets her with the words every girl NOT on Cheaters dreams of hearing when surprising her true love on TV: “Holy shit!”

Shawntel says she is here to find out if Ben’s interested in having her in the competition. In need of a few minutes alone to think, Ben leaves Shawntel with the other ladies. He hopes the women are gracious and welcoming. We hope to win the lotto. Chances for both are low. Perhaps Courtney puts it best: “This is whack.”

“Shawntel rides in on her high hearse, no pun intended, and says she’s here for Ben,”  Nicki says with a straight face, “I’m not OK with it!”

At last Ben’s back to hand out some roses, the first of which goes to Courtney. She accepts, but tells Ben that she saw him talking “to what’s-her-butt” and it was hard. “Thank you for not making me go through that,” she adds, nonsensically. Ben nods.

Next week the gang is off to Utah, and we promise to be there from start to finish. We’ll even throw in some pre-show coverage, if you’d like. After all, we owe you. And what would we have without trust?

See you next week!