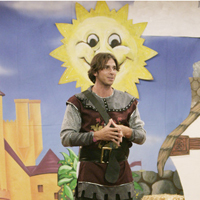 Last week we exchanged hellos (and a kiss!) with Ben’s 25 suitors. But finding love isn’t as easy as getting all dressed up and kicking a ball around a mansion, so this week the 18 ladies who made it through the first rose ceremony are off to Ben’s hometown of Sonoma. Sure, it’s a little early for hometown dates, but Ben wants the women to see Sonoma “so that they can understand.” Understand what, exactly? It’s best if you don’t get caught up on the details.

The group will be in Nor Cal for a week, and they’ll be staying in, essentially, a Sonoma sorority house. We’ve got to say, it’s pretty sweet (are those Anthropologie bed spreads we spy?). But Kacie B. couldn’t be more excited to get out for the very first one-on-one date with Ben.

“Sonoma-fied” Ben pulls up to the house in his Jeep, and while Kacie’s a smidge dressed down in shorts and boots, we’ll forgive her this once  because “first dates are hard.” Ben says he wants to show Kacie what Sonoma is all about: strolling past City Hall, state history, piano duets, and lunch box shopping (at dinner time, how quaint!). Kacie shows Ben something, too: the baton-twirling skills she’s retained since childhood. Kacie says they’re “having a blast,” but if that’s the case, we’d hate to see how depressed Ben’s looks when he’s having a just OK time.

Still, Kacie gets a rose and a kiss and a congratulatory trip to a nearby theater for a private screening of home videos. It’s both endearing and overly personal, like watching a reality dating show, so that’s weird, but all ends well.

This week’s group date is about “making these women feel like they’re a part of this community,” says Ben. As much as we hoped that meant they’d be campaigning for civil office, no such luck. Instead, the girls are asked to audition for a group of child playwrights for parts in the play, Prince Pinot of Bachelorville. The looks on these kids’ faces—and the hoops they have the ladies jump through for prime roles—are Japanese game show-style priceless. Can you act like a weasel? Can you try to be a gingerbread man? Can you do some scales? Can you run in slow motion? That last Q goes to Blakely, who brought her own girls to the date, if you know what we mean.

Before long, everyone has been cast, costumed, and grouped backstage for the big show, attended by a who’s who of Sonoma (we’re guessing). To our mild surprise, the play’s not half bad. To our total shock, Ben gets half naked in it. Bravo!

At the after party, Blakely gets down to dirty business. “My strategy is just to be me [and me and me]” she says. Naturally, the other girls don’t appreciate her sex appeal. “It might work. It’s a quick and easy—pun intended—way to get a man’s attention,” says Jaclyn. Ding, ding, ding! That’s correct! Blakely gets the rose.

Courtney, Let’s Spin the Bottle
Kacie reads the final date card aloud when it arrives at the house, and it’s for Courtney. “How’d that taste coming out of your mouth?” Courtney asks, forgetting that there’s no difference between talking and thinking out loud. Kacie’s surprised, but polite about the exchange. Erika, not so much. “I thought Courtney was maybe a real person, at first,” she says.

For their date, Ben takes Courtney for a picnic in the redwoods with his dog, Scotch. There they eat, drink, and manipulate the dog into howling. For help. After what must be hours of talking about how happy they are to be there (or perhaps they are on some six-meals-a-day plan?) the couple is off to share a private dinner in the vineyard. Ben tells Courtney about his wild and crazy days as a hot shot ad guy, and Courtney tells Ben about finding underwear (presumably not her own) in her ex’s bed. “Why are you still available?” He asks. “I meet nice people but I’m not interesting,” she says. Er, “interested.” They agree it’s an Ah-Ha moment. The dog’s not around to howl in concern, so Ben gives Courtney the rose.

Now that we’ve gone on three dates, it’s time to get everyone together for a cocktail party. Back at the house, Ben makes sure to clock in some time with Samantha, Lindzi, and Jenna, the self-described over analyzer/relationship blogger with a penchant for melting down quicker than you can shout “cheers to the skinny tie!” She starts off her chat with Ben by accidentally placing a blanket over a lit candle. Unfortunately, he notices and physical crisis averted. The emotional one hits right on time, just as Jenna’s trying to convince Ben that’s she’s not a typical girl. We’ll repeat that for her. SHE’S NOT A TYPICAL GIRL.

Jenna’s devastated by their “awkward” conversation and jets to the bedroom to cry (those comforters did look cozy!). Blakely, apparently wanting in on the fun, chooses the corner of the luggage room for her meltdown.

Ben can sense something is wrong, and, wanting to get to the bottom of it, goes room-by-room, discovering bodies as he goes. He finds Blakely behind a Samsonite, then Jenna under the covers. “This is going to be hard,” he says. He must be talking about the part where he explains all this to his future grandkids.

Time to hand out some roses!

Ben and the gals are off to San Francisco next week. See you there!