Home Uncategorized Recap: The Bachelor, Ep. 1: “I Like a Good Slug” 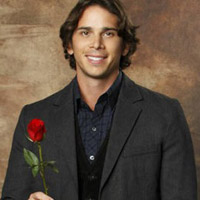 It’s winemaker Ben “Good Things Don’t End Unless They End Badly” Flajnik’s turn to find love on The Bachelor, and we couldn’t be more excited, and not just because it seems as if the show’s producers have rounded up a particularly memorable group of contestants this season—but because we really like him. And the way he draws elephants in orphanages.

The last time we saw Ben he was being whisked to safety in a speedboat after Ashley Herbert said thanks, no thanks to his marriage proposal at the end of The Bachelorette.

Since then he’s moved back to San Francisco, focused on building his winery, kayaked shirtless, stared off into the distance, and dated a celeb (if this counts).

Ben says he’s a “better, more complete person now.” But—we’re in luck!—something is still missing, and it’s That Person. We don’t think he’s talking about Bentley, so things are off to a great start.

After a twenty-minute intro, Ben back’s at the mansion. Let’s meet the women!

First out of the limo is Rachel, a pretty blonde fashion rep who left her job for the chance to meet Ben. “No pressure!”

Courtney is a model who “knows what she wants”—in an engagement ring.

Jamie’s a nurse who had a hard-knocks childhood.

Lindsie is an Internet entrepreneur who, when she’s nervous, sounds an awful lot like Mary Poppins on the sauce.

Jenna “Good Things End” B. is a relationship blogger who admits she’s prone to overanalyzing breakups and may as well have entered the house waving a red flag.

Kacie is a super-duper cute administrative assistant who crinkles her nose when she’s “intimidated.”

Shawn is a financial adviser, mom, and PBJ enthusiast with a surprisingly strong right hook.

Amber is a Canuck with the last name Bacon who offers Ben “a taste.”

Samantha is Miss Pacific Palisades, sash and all.

Holly’s a Southern blonde with a derby hat that doubles, unexpectedly to her, as a cock-blocker.

Amber is a critical care nurse with a thing for skeet shooting, camouflage, and eating cow balls. (So that’s why we mistook the show’s commercials for a preview of SAW VII.)

Sheryl is a 72-year-old retiree who brings out her best clutches to introduce Ben to her granddaughter, Brittney.

And Lindzi is a 26-year-old business development manager who was once on the receiving end of the text BABE, WELCOME TO DUMPSVILLE. POPULATION YOU.

Perhaps in exchange for sharing that priceless anecdote, the producers allow Lindzi to arrive last, and on horseback. We would have guessed it would be the sash, but turns out nothing gets this group of ladies riled up like competition showing up on a horse. Courtney puts it this way: “Screw you and the horse you rode in on.”

We’d love to hear how Lindzi’s ex would put it.

Oh well. Time for a drink, don’t you think?

Now that everyone’s inside, Ben gets to know Grandma (she thinks her granddaughter is just swell!), learns that Emily has a “gangsta side” (Spoiler alert: there’s nothing gangsta about her. Ok fine, her rap is kind of cute.), and narrowly avoids finding out that Monica has a thing for—wait for it!—Blakely, one of the other women.

The lady-to-lady flirtation sets over-analyzer Jenna on overload. “How do you maintain sanity?” she asks no one in particular. Carrie Bradshaw, are you listening?

Rachel hates conflict, so she steps in to help Monica and Jenna bury their make-believe hatchet by getting them to talk it out. Their chat goes like this:

Not soon enough, Jenna’s off to the bathroom, babbling to herself between sobs a month’s worth of material for @shitgirlssay.

Meanwhile, Ben’s finally walking around the house with the first impression rose, which goes to… Lindzi!

Time for our first Rose Ceremony.

And that’s it for tonight. Not bad for a starter episode—or an apertif, shall we say? See you next week.