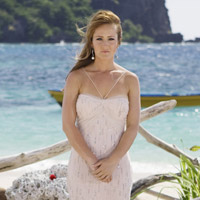 Welcome back to Fiji, where Ashley’s “ready to walk away with her husband.” And thank God, ‘cause it’s the season finale!

But before Mr. and Mrs. Ashley can walk off into the sunset, there’s still the pesky business of choosing between Ben and J.P., two guys who, we’ve got to hand it to her, are pretty great.

On hand to help Ashley decide who’s right for her is her mom, her step-dad, her brother, and her arch enemy sister, Chrystie.

“Do I go with exactly what I’m feeling even though it might seem like we are very different?” she asks her family, with a big smile on her face. “Or do I go with the person that I think maybe it could progress to that level of passion but we are much more compatible?” You know, like she’s choosing hair colors.

J.P. gets to meet the family first, and he’s anxious and nervous and cute as ever. He’s even cleaned up with a close shave for the big day. After lobbing J.P. a couple softballs, mom welcomes him to the family with a toast. Then Chrystie attacks. She asks Ashley a “tough question” about her relationship with J.P. (read: “Does he make you laugh?”) and then, unsatisfied with Ashley’s answer, she decrees what’s what.

Her insensitivity strikes a nerve, and it’s a gusher; Ashley is reduced to a blubbering, stuttering mess. So Chrystie turns on J.P.  “Why haven’t you found anyone yet?” she wants to know. “And what do you want with my much younger sister?” As if he’s damaged goods. Or 60.

“I’m just struggling with the whole thing,” she Chrystie. Adding for good measure (or a villain role on Bachelor Pad), “I don’t know if there’s anything for you to turn around.”

J.P.’s left questioning EVERYthing. “If today changes Ashley’s mind about me,” he says, “then I’m definitely not proposing.”

In the morning, Chrystie’s re-charged and ready to face-off with Suitor #2. She’s also still wearing the shell necklace that she was given at check-in. Just sayin’. Ashley’s not feeling the situation. “You just come across like you’re being such a bitch!” she says, instigating a fight the sisters probably should have had (or did) when they were ten. Instead of apologizing for hurting Ashley’s feelings, Chrystie takes the opportunity to recap the gist of her opinion, which is that Ashley’s heart has been wrong before and therefore she should never, ever trust her self ever again. Turns out, Chrystie herself has been divorced (who saw that one coming?), and that’s not what she wants for her baby sister. Where’s Brad’s therapist when you need him?

Poor, sweet Ben walks into the firefight like a lost doe, and Ashley compensates by totally losing her cool, standing up, throwing her arms in the air, and shouting, “Yeah! Let’s party!” To which Ben says flatly, “I don’t know what that means.” Someone get this guy a show! Then Ashley forces Ben to speak to her like he’s talking to his dog, which makes him want to die and makes Chrystie super happy. It doesn’t hurt that she finds Ben super attractive.  Or does it?

The next day Ashley has her last date with Ben, who shows up “dressed for the tropics” like Vacation Ken. Ashley and Ben take a helicopter ride to a healing mud bath that “people come to from all over the world.” But there’s no one there right now. So they get to “lube themselves up with mud.” “It’s very sexy,” Ben says. “It’s sexy,” says Ashley. Must be sexy.

Things get serious over dinner. Ben, who has changed into a suit, plans to tell Ashley that he loves her. She shows up in cutoffs. Once she’s swigged a glass of champagne, he gets down to business. “There have been multiple moments when I wanted to tell you that I am in love with you,” he says, “and I never expected this in a million years.” Ashley kisses Ben, the music gets going, and—what can we say?—our heart soared.

But Ashley’s still got another date with J.P., and they start it off with an emotional recap of his chitchat with Ashley’s sister. It doesn’t go well—at first. “When it comes to you, I’m flexible on everything,” J.P. reassures her. “I want us to start a new life together. I’m at a point in my life where I am willing to give up a lot. And not because I have to, but because I want to.” He finally tells her he loves her (worst kept secret on the network!) and Ashley kisses…his face.

Later that night, J.P. gives Ashley a gift, which comes in a woven bag. “What is that?” she squeals. “It’s just what it comes in?” he says. The gift itself is a scrapbook with a letter and a photo of J.P. and Ashley on the beach. Then he gives us a gift, too, and it’s this gem: ”She may love both of us, but she can only be in love with one of us.”

In the morning, Ashley steps out of her mosquito net-covered bed happy to be at the end of her journey to find love.

Luckily, Neil Lane got our call, so he’s on hand in Fiji to help Ben and J.P. pick out engagement rings!  “When did you know?” Neil asks Ben. “What happens if she says no?” he asks J.P. Couldn’t have happened to a nicer guy.

Now that both of the boys have hardware in their pockets, it’s time for the final rose ceremony, which happens somewhere that must be magical, because Ashley can walk there but the guys have to take a water plane.

The first plane arrives just off the beach, and out steps…Ben. Chris Harrison shows him to Ashley, and although she starts to say something, Ben stops her. And proposes! Ashley can only shake her head and try to help him up and out, but Ben’s not interested in hearing anything she has to say. “Good things don’t end unless they end badly,” he says. “I thought I was in love. Maybe I was wrong about that, too.”

Happily, things go much-MUCH better with J.P. “All the time that we’ve been spent together, it’s been the happiest time of my life,” he tells Ashley. “You always say to me, you’re smiling all the time, you’re going to have wrinkles later. I smile because of you.”

“I don’t want to be with anyone else but you forever!” she says.

And then he drops down to one knee, shows Ashley that Neil Lane sparkler, and asks her to marry him. She says YES, then joins her new man for a post-proposal run into the ocean!

And that’s it! It’s all over! Ashley is engaged! And J.P.’s on cloud nine! And Ben is going to be fine (one day?)! Chrystie’s gonna feel like a jerk! And we’re hanging up our remote. For now, at least.

Thanks for joining us on this journey. It’s been “amazing!”