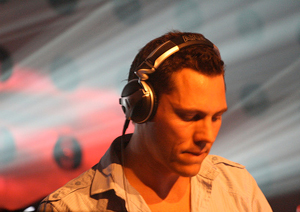 I am not a raver. I don’t own highlighter-colored spandex or flashing light jewelry, and the only suitable beaded bracelet I have was handed to me by a wide-eyed girl at last summer’s Electric Daisy Carnival. Tiesto’s performance November 27th at the Shrine Auditorium may have changed that.There were girls perched precariously on the shoulders of guys in the crowd, entranced by the music and staged light show. Others danced wildly, moving so quickly their bodies were almost blurry to watch.  Some even sat on the floor—it’s a wonder they weren’t trampled—captivated by a boy in the audience performing a light show with glow sticks of his own. It was intimidating. But as soon as Tiesto took the stage with his electro rendition of Red Hot Chili Peppers’ Otherside, I was hooked. The pulsating beats he projected onto contemporary songs gave them a dance-inducing quality I’ve never heard before. And boy, did we dance. Low notes like Century ft. Calvin Harris—whose lyrics were projected onto the big screens—were juxtaposed alongside the more fist-pumping and hard-hitting Adagio For Strings. The grammy-nominated DJ couldn’t help but take his hands off the turntables and dance to his own Louder Than Boom, waving his hands in the air with the ravers in attendance. I especially appreciated Tiesto’s remixes of U2’s Beautiful Day and the Yeah Yeah Yeahs’ Heads Will Roll, which offered a welcome respite from dancing and encouraged the audience to sing along. Not that I could hear my own voice above the music—my ears and head were still ringing long after I left the concert.