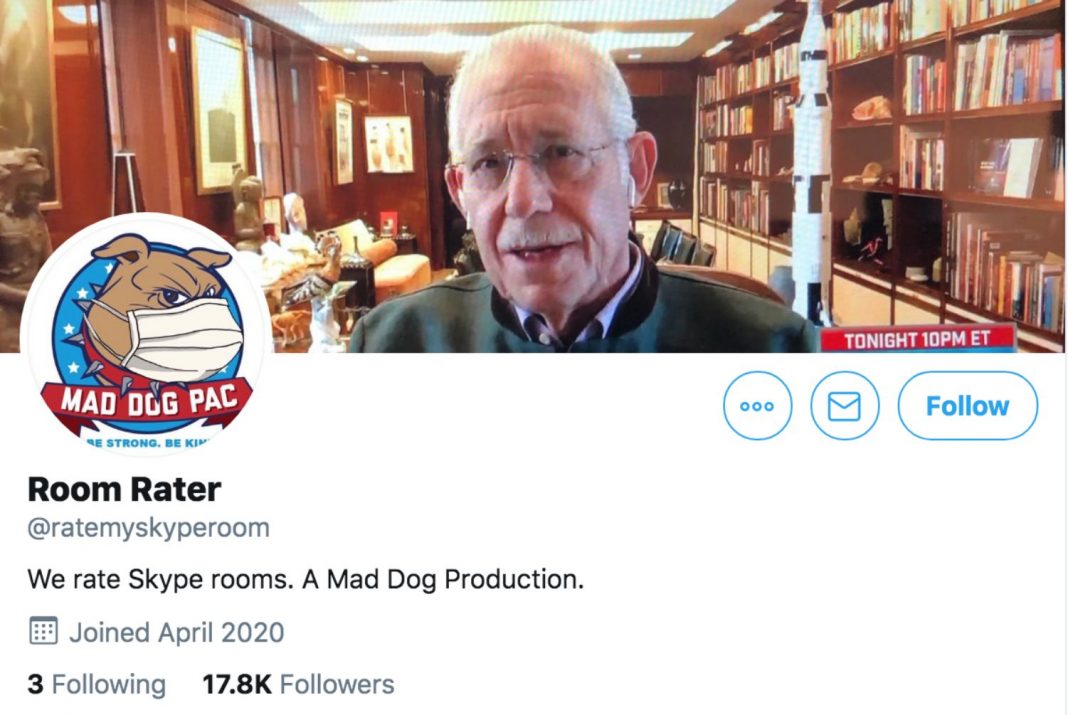 With the country on lockdown and TV studios empty, our talking heads have been forced to work from home, giving us a rare glimpse of their private lives as we peer into their offices, living rooms, and other intimate settings. Now, a new Twitter account is taking the opportunity to pass judgment on the personal spaces of anchors, politicians, and other media chatterboxes—and the internet loves it.

Room Rater, or @ratemyskyperoom, has accumulated more than 17,000 followers in just five days by posting screen captures of politicos’ home bases and rating them on a scale of one to ten along with the reasoning behind the scores.

For example, Senator Lindsey Graham’s digs get 0/10, due to, “Bad art, shitty room, shitty human, fuck off” in a post that’s gotten over 400 retweets and almost 4000 likes in two days.

Bill Maher’s Los Angeles back yard did well with 7/10 but lost points because his, “garden gnome looks an awful lot like Mao.”

Nice back yard @billmaher, but your garden gnome looks an awful lot like Mao. 7/10 pic.twitter.com/IDKEodZncV

Also hitting it out of the park is Sean Penn’s spacious tent in Malibu.

If the ratings seem a bit politically one-sided, it’s because the account was created in Washington D.C. by former Clinton White House director of volunteers Claude Taylor and his girlfriend, Jessie Bahrey, of Vancouver.

Taylor tells Los Angeles that they started the account “because we were always snarking at each other about people’s Skype rooms. It’s just meant as some lighter quarantine content.”

Indeed, some pundits have learned to have a sense of humor about their interiors being lambasted.

Axios’ Jonathan Swan lamented, “This is rough stuff,” upon receiving his 3/10 grade.

This is rough stuff https://t.co/RLVz6GirBe

While NBC News legal correspondent Cynthia McFadden successfully lobbied to up her score.

Well folks, it appears your support (thank you all!) and a careful review by the judges has moved my green room up from a 6/10 to an 8/10. Finally, I can sleep. Appreciate the support. @TrueFactsStated and the upgrade @ratemyskyperoom https://t.co/0P5Yj8d8Nc

Taylor currently runs the Mad Dog Political Action Committee. Until recently, the PAC was committed to putting up anti-GOP billboards but has temporarily switched to raising funds to provide personal protective equipment to healthcare workers.