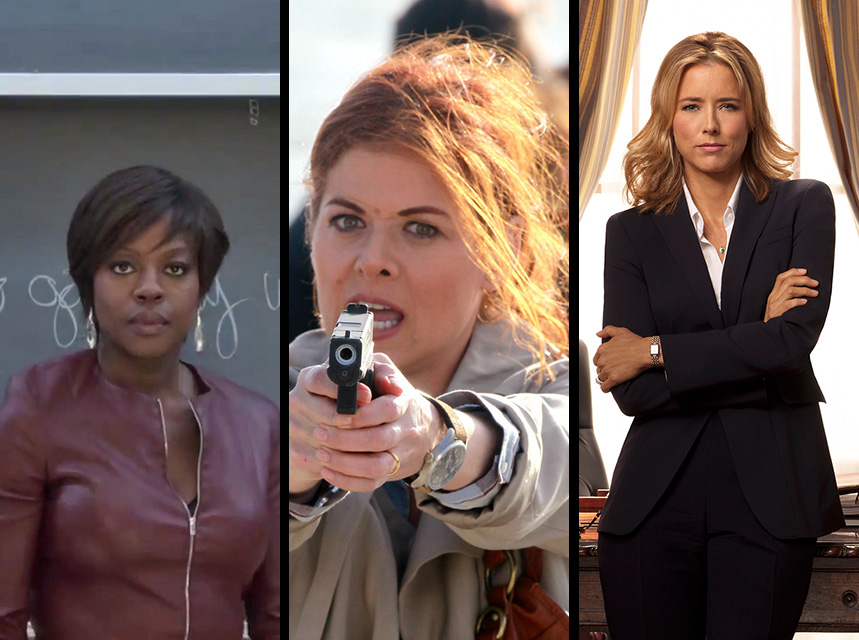 Hollywood isn’t exactly a welcoming place for strong women (onscreen or off), but a slew of shows starring these kinds of characters have recently made strides. While we know and love Alicia Florrick (The Good Wife), Olivia Pope (Scandal), and Claire Underwood (House of Cards), the fall 2014 season introduced a slew of kick-ass leading ladies. It’s not just the thought that counts. Are the characters (and actresses who play them) worthy of our valuable DVR storage space? Some deserve the Jessica Chastain seal of approval while others miss the mark.

Viola Davis – How To Get Away With Murder (Thursdays at 10 p.m., ABC)
When a two-time Oscar nominee turns to TV, the results are bound to be good. Viola Davis doesn’t disappoint in one of the most exciting new shows of the year. Sure, the “tough-as-nails” cliché is thrown around too often to describe her character, brilliant attorney Annalise Keating, but Davis’s depiction is nuanced and authentic enough to keep viewers (and Golden Globe voters) riveted. The real triumph is that whether you love or hate the often unlikeable Annalise, it’s hard to stop watching her. She’s deadpan, devilish, and opportunistic; you’ll find yourself Googling interviews with Davis just to see if she ever cracks a smile in real life. (She does; she even laughs.) That’s how perfect she is in this role. Let’s just hope an urge to get back to movies doesn’t make Davis pull the plug on Annalise’s career.

Téa Leoni – Madam Secretary (Sundays at 8 p.m., CBS)
Tea Leoni has a tough job to do as Secretary of State Elizabeth McCord. For viewers to accept her in the role, he has to captivate us enough to free our minds from the obvious Hillary Clinton parallels. As long as Leoni has blonde hair and wears pantsuits, we’re not sure that’s entirely possible. But given the hand she was dealt, she has done a top-notch job. After a 16-year hiatus from television Leoi hasn’t lost her touch; she’s believable and likeable in the tough-to-pull-off role. As with any political drama, the show is often compared to The West Wing and House of Cards, and with a female at its center The Good Wife references are common. Madam Secretary isn’t as great as any of those shows, but Leoni’s return is something to rave about.

Anna Gunn – Gracepoint (Thursdays at 9 p.m., FOX)
Hot off Breaking Bad, Gunn probably had plenty of options for her next project. Her starring role in Gracepoint was a risky move; based on the much-loved British drama Broadchurch, the American adaptation has a lot to live up to. Though the limited series, which ended December 11, was a ratings disappointment, Gunn’s performance was memorable. As detective Ellie Miller she was smart, stern, sympathetic, and strong not unlike her breakout role as Skyler White in Breaking Bad. While Skylar was often criticized by viewers, you root for Ellie as she gets closer to cracking the murder at the show’s center. Gunn researched her role by spending time with real life law enforcement workers, a detail that has paid off in her performance. Gracepoint is no Broadchurch, but Gunn gives us Americans something to gloat about.

Katherine Heigl – State of Affairs (Mondays at 10 p.m., NBC)
Choosing CIA analyst Charleston Tucker as her comeback role seemed strategic; Heigl first shot to fame as a determined, intelligent doctor on the primetime drama Grey’s Anatomy. Could lightning strike twice? With State of Affairs, it doesn’t seem likely. It’s not that Heigl lacks the talent—she’s better than the dreadful rom-coms she keeps churning out—but in this role, she’s just not believable. She spits out political jargon like a pro, but it’s not enough to keep us focused. Between Charleston’s profession, sexual recklessness, and inner turmoil, it’s impossible not to think of Claire Danes as Carrie Mathison in Homeland. Something about Heigl’s too-recognizable appearance doesn’t cut it either. Perhaps she should’ve taken a cue from Jennifer Aniston, who went brunette for Horrible Bosses; she knew she couldn’t play such a racy role looking like Rachel Green.

Debra Messing – The Mysteries of Laura (Wednesdays at 8 p.m., NBC)
Overheard at the Los Angeles magazine office: “I mean, really? Debra Messing with a gun?” Transforming the star of Will & Grace into a homicide detective was a tough sell, but we were rooting for the TV veteran. She had it hard last year with her short-lived series Smash (which was moved to a Saturday night slot shortly before being cancelled—ouch). Even with our fingers crossed, there’s not much to like about Messing’s latest stint as working mom Laura Diamond. Unlike detective Kate Beckett (Stana Katic) on ABC’s Castle, Messing looks completely out of place standing next to a dead body. Even more unbelievable: We’re supposed to think of Laura as a good mom when she menacea children who literally pee on each other in public. It pains us to say it, but since Will & Grace Messing has suffered from the Matthew Perry Syndrome. She just can’t catch a break.

Kate Walsh – Bad Judge (Thursdays at 9 p.m., NBC)
Are all Grey’s Anatomy alums cursed when they venture outside of ShondaLand? (Luckily Ellen Pompeo has plans for a post-Grey’s retirement.) At least Heigl’s problematic character stars in a decent show. Unfortunately for Walsh, there’s nothing good about Bad Judge, which was cancelled less than a month into its run. For a comedy produced by Will Ferrell, the jokes aren’t funny. If there’s one light in this black hole of a show it’s Walsh’s natural charisma, though it’s mostly wasted as hard-partying judge Rebecca Wright. If we believed that a judge could be a smidgen this disheveled, we’d give Walsh more praise. Even among heroines with superpowers and a pregnant virgin, Wright is still one of the least plausible characters on TV.

After Insulting Hollywood, Trump Heads to Beverly Hills to Beg for Campaign Cash