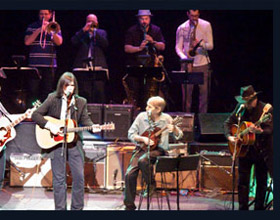 A good friend of mine watched The Last Waltz for the first time on Sunday night. Martin Scorsese’s film about The Band’s 1975 Thanksgiving Day concert in San Francisco featuring more than a dozen special guests like Neil Young, Bob Dylan, and Emmylou Harris was airing on TV. Across town, The Band’s former drummer and singer, Levon Helm, was bringing the documentary to life at the Greek Theatre.

Okay, so Robbie Robertson wasn’t there, and neither was Young, Dylan or Harris, but Helm, his band (with his daughter, Amy), and a handful of unannounced guests including country legend Steve Earle, drummer Jim Keltner, and actor-singer Harry Dean Stanton rocked life into a set of hits from the American songbook. Helm opened with “Ophelia” and “Long Black Veil” by The Band, then took the audience on a virtual tour of the South with bluesy covers of Leadbelly’s “Bourgeois Blues,” the Grateful Dead’s “Tennessee Jed,” and The Rolling Stone’s “Sweet Virginia.”

Thirty-five long years have passed since The Band took the stage at Winterland. The Band has broken up. Dance, alternative, hip hop and rap music have taken their turns as pop. The Band’s base has aged. So has Helm. He battled—and overcame—a bout with throat cancer that threatened to silence him at the end of the nineties, and his voice, moving as ever, now has one jagged edge, the slightest of scars. “Keep sayin’ a prayer for me,” Helm told one well-wisher between songs.

And yet the music—and that great, collaborative musical tradition of country rock—has rambled right on down to a new generation of fans and performers. L.A.’s own poster girl of cool, Jenny Lewis, opened for Helm with a special guest of her own, singer-songwriter (and boyfriend) Jonathan Rice. Lewis sang “Just One of the Guys” and the unhinged ballad “Jack Killed Mom” with her knees slightly buckled, her left hip keeping the time, and a bottle of beer at her feet, then stepped into the spotlight to close her set with a crowd-hushing, gospel-kissed rendition of “Acid Tongue.”

Helm will join singer-songwriter Ray Lamontagne for his next concert in Austin, Texas this November. I wouldn’t be surprised if he adds a cover of newer material to his mix before that show. Something a little unhinged. Or something crowd-hushing.