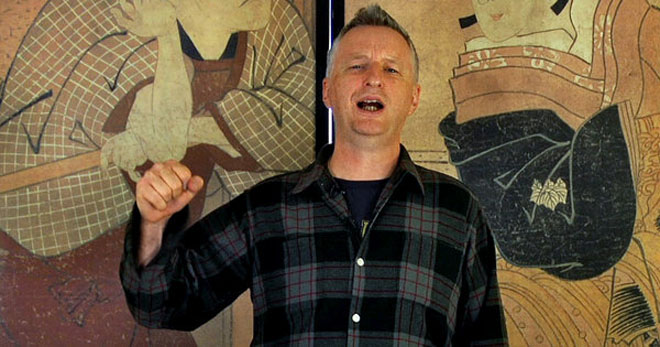 Antonino D’Ambrosio, the director of Let Fury Have the Hour, is no stranger to telling it like it is. As a preteen in the early and mid-1980s, D’Ambrosio grew up during the presidency of Ronald Reagan. Though his ideologies didn’t match with those of the Commander in Chief, D’Ambrosio found solace in the counterculture of the era: skateboarding, punk rock, hip-hop, and street art. He forged a lifelong mission or story, if you will, the culmination of which was recently been released as a documentary.

Let Fury Have the Hour screens tonight (January 25) at Laemmle’s NoHo 7 and will be released on VOD via SnagFilms on March 5. The film expounds on his notion of “creative response,” which he sees as a tool to combat Reaganism, Thatcherism, and economic inequality. D’Ambrosio shared his thoughts on art and revealed some of the cogs and tinkerings that went into making the flick.

Q: What was the inspiration for Let Fury Have the Hour? And How long did it take to shoot and piece together?

A: I’ve always been interested in the intersection between art and how it affects the world around us. When I came up as a young kid, I started to develop this idea of creative response through all those things that I cover in the film — skateboarding, punk rock, hip-hop, street art. I worked on the film for seven years. Between doing that, I wrote three other books and collaborated on a bunch of projects with Shepard Fairey. In many ways I think I’m still making this film, because when the work gets out, you end up collaborating with the audience. For me, that’s the beauty. I’m always thinking about it, reshaping and recalibrating the ideas that are in it.

Q: Can you elaborate on the vision?

A: I’m not interested in traditional documentary filmmaking. I wanted to do something different. That starts with not using contemporary archival footage. I sketched it out in four acts and wrote a script with specific cultural touchstones and historical tipping points. That helped me find the first 10 minutes and the next 10 minutes. There were three elements that were really important to me: the music, the actual interviews, and the archival footage. I wanted you, the audience member, to feel like you were there.

Q: What about the filmmaking process?

A: Throughout the process I would watch the film with no audio to see if the images were telling a story, and I would listen to it with just the music. Eventually, I got the story melded together. I like to say I see the music and I hear the images – that’s a big part of how I work.

Q: What was the biggest challenge?

A: It’s impossible to not say money. Financing is always a mess of a challenge. That’s the tension that exists between creating art and commerce; it oftentimes was a very exhausting process. You have to leave yourself open to the unexpected. You can’t be so visually tied to what you want to do. You have to have that lube and flexibility.

Q: Anything that was left on the cutting room floor?

A: There’s a lot. We had this really powerful part where we found this old version of 1984, the film version, which we intercut with a performance of the Slackers. it was extremely powerful. John Sayles also had a story about covering the Republican National Convention in 1980 in Detroit. The Republican committee put up their delegates in Canada, and they would bus them into Detroit and they would black out the windows so they couldn’t see around them. It was an amazing story about how disconnected people were from what was really happening.

A: The job of the artist is to hold up a mirror. Art is about creating a dialogue where there wasn’t one before, so I look at it as more of tapping into someone and making them uncomfortable.

Q: What’s the significance of screening the flick in L.A.?

A: It’s L.A., known as the city of dreams. I can see no other appropriate place for the film — it’s about dreaming. If we dream our dreams together that’s what reality is. In the city of dreams, it would be nice to launch this film, and in some way effect that dreaming, that narrative, that consciousness of L.A.

Q: What should Angelenos take away from the film?

A: The film isn’t about you or me, it’s about forming a new “we.” Society only moves forward when we understand that we’re connected in that way. That’s how everything in society has been accomplished. Art doesn’t necessarily change things, but it gives us the tools and the language that allow us to come together.