Home Holiday Do the Holidays Make You Want to Bash Things? Check Out Rage... 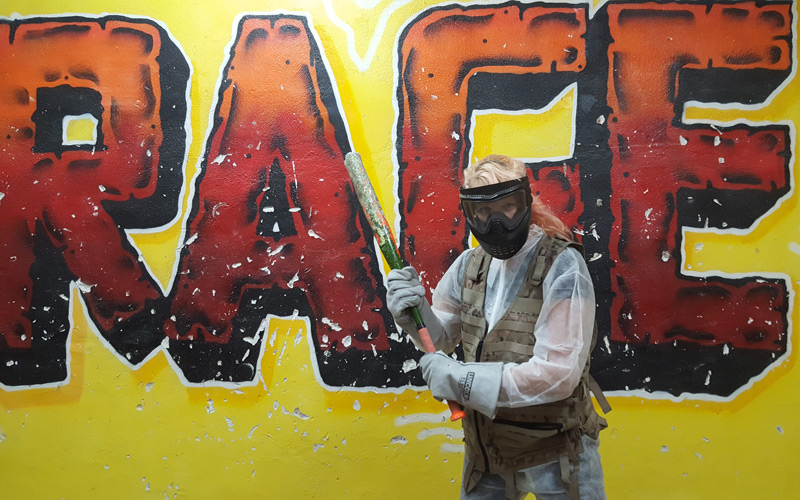 I’ve broken many wine glasses in my life, but the first time I ever broke one on purpose was at Rage Ground (1120 1/2 S. Main St. in DTLA), which is the only permanent anger room in Los Angeles. I visited recently with some friends and discovered that “deconstruction therapy” isn’t just about releasing anger and frustration—it’s also a lot of fun.

Co-owner Peter Wolf was inspired to start Rage Ground after seeing another anger room on a TV show.  He wanted to go to one, but there weren’t any local options, so he and his friend Edwin Toribio decided to start their own. Rage Ground opened in June, and as word gets out, business has been picking up. Wolf said, “Some people come in because they’re pissed off about L.A. traffic. We’ve had people come in after a divorce settlement or breakup. It’s kind of just all the factors of life that people get pissed off about.”

After we signed the required waiver, Wolf gave us our protective gear, which included coveralls, a face shield, thick gloves, and a vest. They also have optional helmets, which are worth considering, because the occasional shard of glass will land on your head. Once we were suited up, Wolf guided us into a small room where the word “RAGE” was painted on the wall in giant letters. He gave us the cardboard boxes of things we’d paid to break.

Rage Ground has several package options. The smallest one gets you five minutes of smashing for $19.99. It comes with four small and four medium items. If you want to break things with a friend or loved one, there’s a “Date Night” package—25 minutes and a bunch of things to smash. The items are mostly glass, but hard plastic shatters well, too, and metal things are great because you can bash them repeatedly. Rage Ground also offers “specialty items” such as furniture, electronics, and Trump piñatas that can be added on to any package. (In case you’re wondering, they do have a special trash hauler who sorts through the debris so it can be recycled properly.)

Wolf told us he’d knock when our time was almost up. Alone with lots of breakable things and an assortment of weapons, we got to work. As Rage Against the Machine blared from the speakers, I amazed myself by discovering that I had enough hand-eye coordination to throw a shot glass in the air and smash it with a baseball bat on its way down. My anger disappeared almost instantly, but it wasn’t even from breaking things—it’s because I was doing a weird, silly thing with friends. We took turns smashing stuff, because pieces of glass were flying in every direction. Wolf told me later, “There’s a big common sense factor that comes into play with this type of activity, especially when you’re in there with multiple people.”

When we finally ran out of things to break, we realized we’d been in the room almost an hour. It turns out that when nobody is waiting, they let people rage for longer than their allotted time. Wolf said, “We’re just trying to give people the best experience we can with our schedule.”

Rage Ground has appointments available on Tuesdays, Thursdays, Fridays, Saturdays, and Sundays. Make a reservation on its website, and remember to wear closed-toe shoes.

RELATED: Five Gorgeous Hotel Pools Where You Can Cool off without Booking a Room