Home Celebrity Rachel Bloom Is Going to Alienate New Yorkers If She Feels Like... 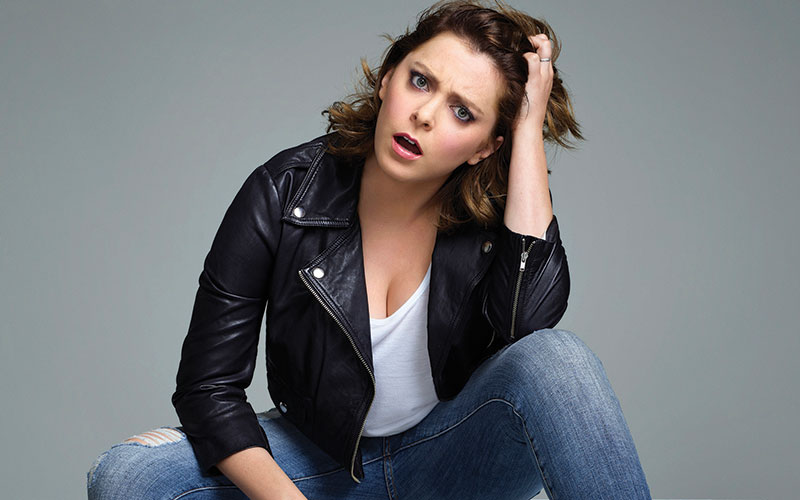 Name-checking West Covina in a song is like trying to find a personalized license plate key chain that reads, say, “Marielle”: not easy. Unless you’re Rachel Bloom, who wrote a song and an entire TV show—the CW musical comedy Crazy Ex-Girlfriend (season two premieres October 21)—about the San Gabriel Valley city. Bloom plays Rebecca Bunch, a Manhattan lawyer who moves to West Covina in pursuit of her high school boyfriend’s heart. The series was critically lauded as a comedic tour de force, and Bloom won a Golden Globe for Best Actress in 2015. (Until that point, she was most recognized for a viral YouTube video called “F— Me, Ray Bradbury,” an unforgivably catchy tune about a young girl who fantasizes about—well, you know.)

“We got the key to the city of West Covina—that was cool. It made me feel pride in Los Angeles.”

Born and raised in Manhattan Beach, Bloom brings a hyperlocal sensibility to the show, which is how she prefers it. “East Coasters are so confident about making insidery jokes,” she says. “It’s fun to treat California the same way. Like, ‘This is our normal, and you’re going to live in our space now.’ ” Here she talks crazy ex-boyfriends and her dream West Covina Snapchat filter.

You love Disney. Character you’d cast in an episode of Crazy Ex-Girlfriend?
Jiminy Cricket. He’s magic. And he’s happy. He could ride around on Rebecca’s shoulder and give her advice, and then he’d have to watch her have sex and he would be horrified, and that would be really funny.

Disney prince who’d be a crazy ex-boyfriend?
Prince Eric. He falls in love with a woman based on a blurry sense of hearing her voice. That’s insane. He’s a weirdo.

A musical revue of your life is opening at the Pantages. What’s it called?
Yay! Boo! I live in the superhappy and the superdark.

Who’d play you?
I mean, I’d play myself.

Obviously. Broadway character you’d want as a roommate?
You want someone chill and sane, so Joan, the cool lesbian from Fun Home.

Three Angelenos—dead or alive—you’d want to collab on a Crazy Ex-Girlfriend song with?
Carol Burnett is one. I’m trying to think, like, who the fuck is from here? Can I cheat and Wikipedia this right now?

I don’t see why not? I would.
Oh there are a lot of people. Ok. I’m going down the list. Oh! Busby Berkeley, who was this famous director in the ’20s. So Busby Berkeley, Carol Burnett—now, wait. It’s listing Beyonce as an Angeleno? But oh! Charlie Chaplin.

Pick a hype man: Stephen Sondheim or Stephen Colbert.
Definitely Colbert. Sondheim’s not hyping anyone, including himself.

Ray Bradbury character you’d want to be stuck in traffic with?
The Illustrated Man. He’s covered in fascinating tattoos, so it would pass the time.

Three unconventional items you need to survive pilot season in L.A.?
Sleeping pills, a device that blocks the internet, and a self-help tape.

The South Bay or South Pacific?
South Pacific. I identify way more with musical theater than with Manhattan Beach.

Snapchat filter you’d design for West Covina?
I fucking wish I could—they’re so expensive. It’s like half-a-million dollars to have one for 24 hours. But it would be the 10 freeway in the background, and you’d be wearing goggles because you’re on your way to Raging Waters. And you’d be holding an In-N-Out burger.