Home Uncategorized Quick Take: The Doors: Live at the Bowl ’68 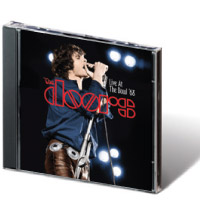 Considered to be the best Doors performance captured on film, the band’s July 5, 1968, Hollywood Bowl show has been restored and remixed as a DVD and CD (Rhino Records, $12). That’s great for bootleg traders, but the three newly released tracks don’t invigorate a 16-song set in which Jim Morrison’s vocals seem strangely backgrounded. Those who want less Lizard King and more Ray Manzarek will cheer. Otherwise, it’s an album for completists.