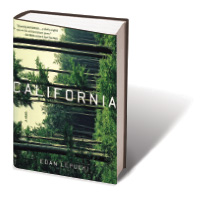 California and science fiction are both, famously, where the future happens first. Local writer Edan Lepucki’s dystopian debut novel, California, ticks ahead a few years to a feral, half-deserted Los Angeles. Class war rages. An anarchist bomber has crumpled Hollywood & Highland’s faux-Babylonian ruin into the real thing. Somewhere outside the city a young couple named Cal and Frida wait out eternity, warily joining a band of survivalists and ambivalently expecting a child. Lepucki doesn’t predict the future—she just exaggerates the present to imply a point: that families, cults, gated communities, and the entire First World are closed, inbred systems obliged to overcome their selfishness or bleed out. The postapocalyptic landscape and a fissile marriage braid together brilliantly: It’s Revolutionary Road without electricity or running water.