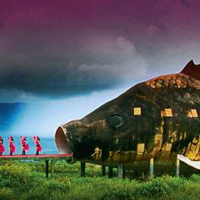 Cinephiles love to complain about the Oscar and Golden Globe nominees, but the Independent Spirit Awards, which are held the day before the Academy Awards and will air on Saturday at 7 p.m. on IFC, often boast the best quality-to-acclaim ratio.

This year, there’s not a bad film in the bunch–an exceptionally rare feat. Even better, eight of the nominated films are currently available on Netflix Instant and several other nominated movies can be found on VOD platforms like Amazon or on home media. Next time you’re browsing through your queue, here are a few options:

Frances Ha
*Nominated for: Best Feature (Noah Baumbach, Scott Rudin, Rodrigo Teixeira, Lila Yacoub), Best Editing (Jennifer Lame)
This is the first great film made about what it’s like to be a “millennial,” or whatever we’re dubbing the newest generation of American adults. Director Noah Baumbach instead turns a sympathetic eye towards this film’s eponymous main character, played by Greta Gerwig, who tries as best she can to navigate life, work, love, and her constantly changing fortunes. It’s funny, whip-smart, and identifiably real no matter your age.

Concussion
*Nominated for: Best First Feature (Stacie Passon, Rose Troche)
Robin Weigert plays a housewife who begins moonlighting as a prostitute, servicing all kinds of women in an intimate manner, after getting conked on the head by a baseball. Carefully constructed on every level, Concussion avoids the usual cliches about people who cheat on their spouses while exploring how adults work through their ruts and emotional insufficiencies.

Upstream Color
*Nominated for: Best Director (Shane Carruth), Best Editing (Shane Carruth and David Lowery)
This romantic sci-fi thriller eschews nearly all traditional exposition. As a result the story of two people who have been changed by their exposure to a strange organism is so hazy it’s nearly opaque. The movie requires multiple close viewings but its theme–how love can help people recover from trauma–rings through from the first frame. Upstream Color is also beautiful to look at, so much so that it’s nearly hypnotic.

Una Noche
*Nominated for: Best First Feature (Director/Producer Lucy Mulloy, Producers Sandy Pérez Aguila, Maite Artieda, Daniel Mulloy, and Yunior Santiago), Best Editing (Cindy Lee)
Over the course of a chaotic day in Havana, a group of young people scramble to escape the city for Miami. Director Lucy Mulloy spent years researching the film in Cuba, and that attention to detail is reflected in her fully-realized portrait of Havana. The movie has already attracted reams of accolades–as well as controversy. Several of the actors used their promotional tours for the film to defect from Cuba to the United States. Check it out and see another side of Cuba.

Computer Chess
*Nominated for: The John Cassavetes Award for best feature made for under $500,000 (Writer/Director Andrew Bujalski, Producers Houston King & Alex Lipschultz), Best Cinematography (Matthias Grunsky)
You’d be forgiven for thinking that this is a film from the 1980s. Shot on black-and-white video and featuring perfect production design, it looks every bit like an old public access documentary. The film follows various programmers as they attend a competition to see who has created the smartest chess-playing program. But really it’s about their awkward attempts to interact with each other and their fellow guests at their rundown hotel. If deadpan humor appeals to you, this is a must.

This is Martin Bonner
*Nominated for: The John Cassavetes Award (Writer/Director Chad Hartigan, Producer Cherie Saulter)
The most unassumingly great movie to come out last year, This is Martin Bonner finds humor and pathos in seemingly banal setups. Paul Eenhorn delivers an understated performance as the title character, who helps recently released convicts readjust to society. Titular character Martin is also dealing with his own integration, having just moved across the country after some major upheavals. This is a small movie with a long aftertaste, one that explores what it means to be a decent person in the world.

Crystal Fairy
*Nominated for: The John Cassavetes Award (Writer/Director Sebastiàn Silva, Producers Juan de Dios Larraín & Pablo Larraín), Best Female Lead (Gaby Hoffman)
Gaby Hoffman’s comeback started with this film, which was a lark for the cast and crew while in the middle of shooting another work. Hoffman plays Crystal Fairy, who is, as you might expect from her name, a relentlessly strange presence. She lacks all restraint, splashing kookiness around like tossing water balloons at a wall. But Hoffman seeds the character with underlying sadness, making her sympathetic instead of merely irritating. This movie also features Michael Cera as an unrepentant jerk, so Cera-haters will find it cathartic.

The Act of Killing
*Nominated for: Best Documentary (Director/Producer Joshua Oppenheimer, Producers Joram Ten Brink, Christine Cynn, Anne Köhncke, Signe Byrge Sørensen, and Michael Uwemedimo)
Much has already been written about this documentary, in which the filmmakers help a group of Indonesian war criminals reenact their genocidal pasts. It is unforgettable, mesmerizing, and horrifying. It’s also as great a depiction of Hannah Arendt’s maxim about the banality of evil as you’re likely to find. You may never want to watch it again, but you owe it to yourself to see it at least once.

The Square
*Nominated for: Best Documentary (Director Jehane Noujaim, Producer Karim Amer)
News of the ongoing troubles in Egypt fills our screens and airwave, and the situation seems to be in constant flux. Between this documentary’s Sundance premiere and its theatrical release, half an hour was added to account for all the new developments. The film follows a cast of people taking part in the revolution as they return to Tahrir Square every time their government tries to crack down on their protests. It’s an intense look at how social and political change are never quick or easy. The man-on-the-ground feeling is thrilling and involving.

The Hunt
*Nominated for: Best International Film (Director Thomas Vinterberg)
It’s easy to see why one might mistake perpetual villain Mads Mikkelson (most recently starring as brilliant sociopath Hannibal Lecter on the NBC series) for a child molester. But in this Danish film his character is completely innocent though he’s the target of a witch hunt caused by the lies of a confused 5-year-old. The slow-burn thriller tightens the noose as the protagonist watches his small town turn against him. It’s a modern Crucible that frustrates at every turn and ends on a haunting note. Worth checking out for Mikkelson’s brilliance and the movie’s cold, haunting atmosphere.