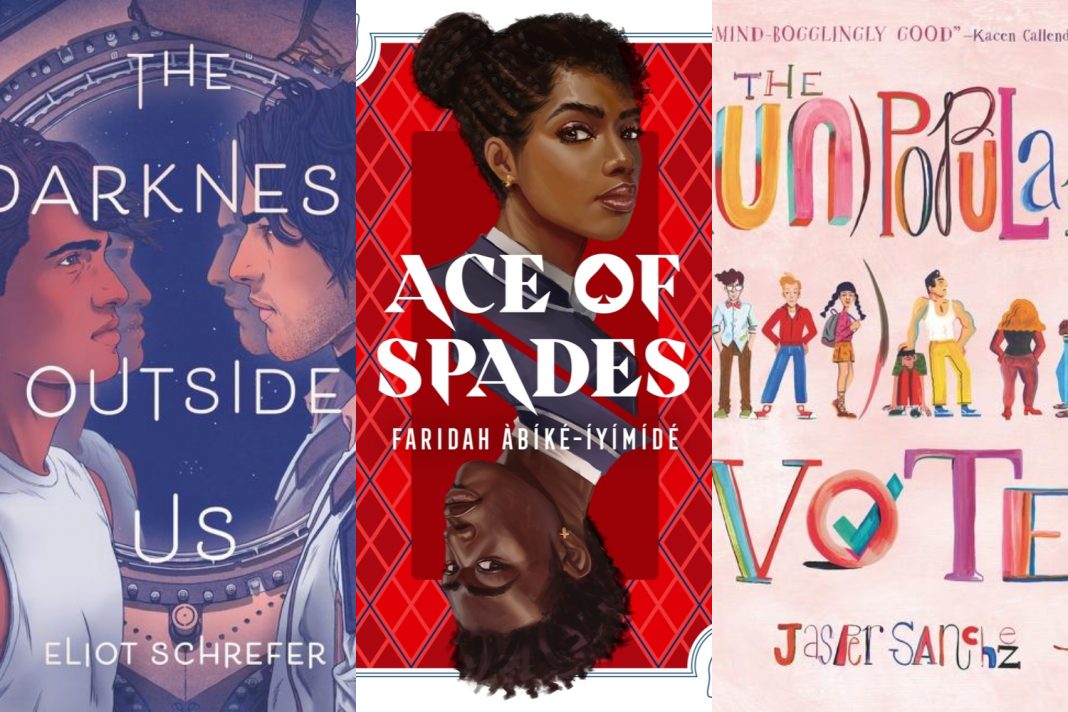 Ace of Spades by Faridah Àbíké-Íyímídé

In this prep school-set novel, marketed as Gossip Girl meets Get Out, two Black teens must uncover the identity of a mysterious texter known only as Aces. Featuring two queer main characters, Àbíké-Íyímídé’s debut is a “positively suspenseful takedown” of institutional racism, classism, and homophobia, according to a review by author Christina Hammond Reeds. Released June 1 via MacMillan.

The (Un)Popular Vote by Jasper Sanchez

Mark is a trans student who decides to run for school president after witnessing a fellow LGBTQ student being bullied. This moment is the catalyst for Mark’s fight against homophobia in student government, which ends up becoming a wider campaign about the intersection of politics and queer identity. Released June 1 via Harper Collins.

The Darkness Outside Us by Eliot Schrefer

Sci-fi and mystery come together in this genre-defying novel about a space mission. Ambrose and Kodiak are two sworn enemies from two rival countries who must work together to rescue Ambrose’s sister. In the process, they’ll have to confront not only the obstacles ahead but the feelings that come forth. Released June 1 via Harper Collins Books.

Hani and Ishu’s Guide to Fake Dating by Adiba Jaigirdar

The rom-com premise of Jaigirdar’s sophomore novel features two queer Bengali girls who are polar opposites and pretend to date. One wants to become popular enough to be elected head girl, while the other wants to prove her bisexuality to her friends. Annie Deo at the Nerd Daily writes that fans of enemies-to-lovers romances, fake dating tropes, and queer and/or racially diverse girls will “feel like all their Christmases have come at once.” Released May 25 via Page Street Publishing.

The author describes this book on Twitter as “a stressed zillenial lesbian fights gods, ghosts, gangsters & grandmas in 21st century Penang.” In case that description hasn’t hooked you yet, this urban fantasy about a Malaysian American medium was praised for being “twisty” and “feminist” by Buzzfeed writer Margaret Kingsbury. Released May 11 via Penguin Random House.

The Girl from the Sea by Molly Knox Ostertag

Illustrations abound in this graphic novel about first love. A young girl is rescued by a mysterious girl from the ocean who reveals her mythical existence. Released June 1 via Scholastic.

From the author of Five Feet Apart comes a new novel about grief and growing up. Emily feels like she’s lost a part of herself after her mother dies from cancer. When she finds her mother’s old summer bucket list, Emily decides to accomplish all its listed items in hopes of reconnecting with her. A burgeoning relationship with her dad’s best friend’s daughter, Blake, has Emily embarking on a journey to reflect on all the ties in her life: the new and the old. Released June 1 via Simon & Schuster Books for Young Readers.

Fifteen Hundred Miles from the Sun by Jonny Garza Villa

In this #ownvoices novel, Garza Villa explores queer Latinx identity in the form of a long-distance relationship. Publishers Weekly calls it a “tender debut” that is “sex-positive and romantic” in its depiction of a teen’s coming out experience. Released June 8 via Skyscape.