Home Art Los Angeles Has Become a Hub for a Wave of Queer Street... 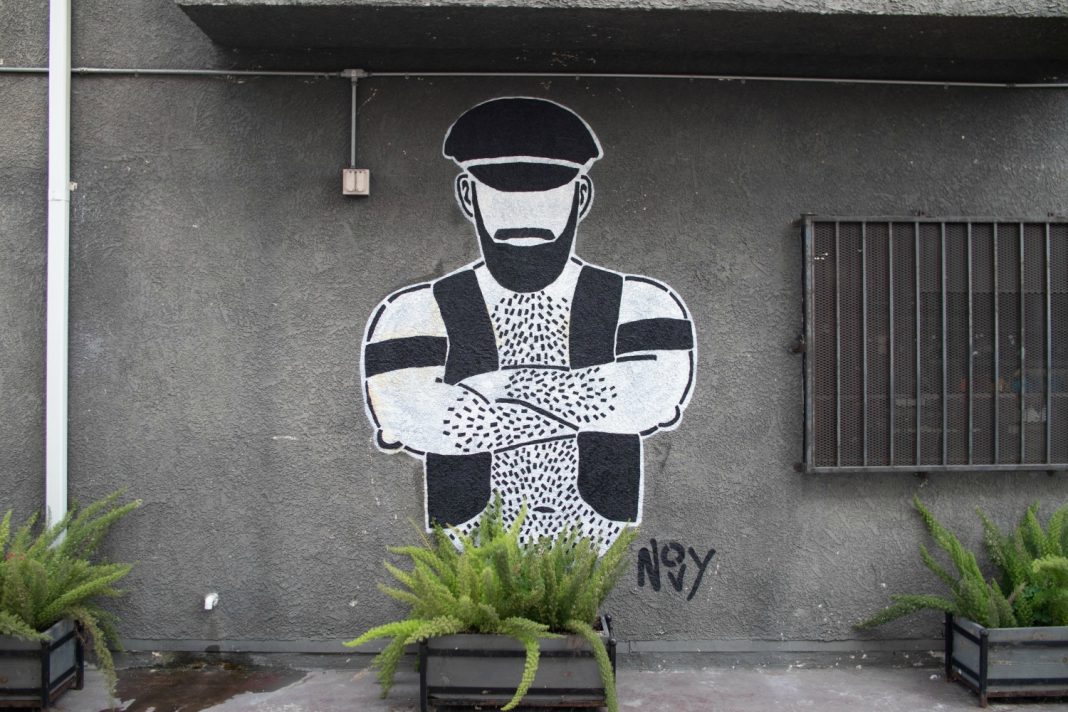 Coverage of the global street art scene would lead you to believe it’s largely the domain of straight, cis men, but as a queer street art movement spreads across the country, Los Angeles has become a prominent locus. While some of the work is aggressively homoerotic, many of the pieces are coy winks to queer culture, coded and accessible to anyone familiar with the language.

Photographer and filmmaker Daniel Albanese has been traveling across the globe to document the queer street art movement. Since 2017, he has been working on a feature length documentary and book on the subject. It’s an ongoing labor of love as he interviews the artists producing queer art meant for public consumption. Albanese came to L.A. in July to document the queer artists painting, wheat pasting, and posting stickers across the city’s streets.

While Albanese has found that most cities usually only have one or two queer street artists, he discovered that L.A. outpaces them all. While in L.A., he interviewed and documented the work of a half dozen artists such as stencil artist and activist Jeremy Novy, muralist David Puck, and witty wheatpaster Little Ricky.

Despite his research, Albanese isn’t totally sure why L.A. is a magnet for queer street art. “I’m still trying to figure that out,” Albanese admits. “I don’t know it is by happenstance or if it’s a combination of things. There is a large gay community in L.A., a lot of space, and a lot of neighborhoods to put up work.”

“Some of the most successful uses of street art for political purposes has been by queer street artists.” —Daniel Albanese

The artists working today vary in style, subject, and medium. Homo Riot, arguably the godfather of today’s crop of street artists working in L.A., began to funnel his anger at the passage of Prop 8’s ban on same-sex marriage in 2008 by plastering images of gay men on utility boxes, construction sites, and abandoned buildings. As he explains on his website: “It was initially a ‘fuck you’ to the general public for not supporting our rights, but it quickly became a message of positivity and support to the LGBTQ community. My goal was to add to the conversation around gay rights and gay pride and to expand the ideas of what it meant to be gay.” The work isn’t subtle nor is it timid. Men holding their genitals or pissing or wielding batons while bare-assed are all common in Homo Riot’s work.

Ricky Sencion, or Little Ricky as he’s known, is born and raised in L.A. In contrast to Homo Riot’s overt depictions of gay men in a monochrome palette, Little Ricky takes a more whimsical, brightly colored approach to queer street art. Playing on the concept of the black sheep, Little Ricky features pink sheep as a recurring motif in his work.

“I read a biography of Alexander McQueen where her referred to himself as a ‘pink sheep’,” says Sencion. “It was a life-changing moment. I wasn’t planning on working in the street but thought I had to. Sheep belong in the street.” Little Ricky reworks the pink sheep in multiple contexts. This year, Vogue editor Anna Wintour is reimagined as one of his ewes all over the city.

Jeremy Novy works as a muralist, stencil artist, and occasional curator. In 2011 in San Francisco, he curated the exhibition A History of Queer Street Art. His work draws from gay pornography, the culture of drag queens, and gay icons, such as his homage to Keith Haring. Yet his most recognizable work is probably his series of koi fish found in murals, stencils, and stickers. The koi are a reference to anti-authoritarian symbols in Chinese art under communist rule.

David Puck, a UK transplant to L.A., is a traditional figurative and portrait painter. Their boldly colorful murals, made primarily with spray paint and acrylic, explores the queer experience, often by depicting drag icons or gender non-conforming individuals. What may read as a portrait of a beautiful woman to the uninitiated, is actually a depiction of Miss Vanjie of RuPaul’s Drag Race fame. Unlike some of the other artists who specialized in self-commissioned work (or what less generous neighbors may call “illegal” murals), Puck works exclusively on commissioned murals. According to Albanese, because of the subject matter, “they have a lot more work to do to find the walls that will accept that.”

Horn Dog specializes in graffiti, usually featuring a simple, geometrically rendered dog in sunglasses, smoking a cigarette. For Albanese, Horn Dog’s medium of choice—spray painted graffiti—makes him a bit of an exception in the world of queer street art. “He’s wrestling with how to make his work more obvious that he’s gay-identifying,” says Albanese. Graffiti “is a different animal. It’s more macho.”

Not to be confused with Horn Dog, Diva Dog is another L.A.-based queer street artist who creates a rainbow-colored sticker or wheatpaste dog, based on their childhood pet. “They want to pass on the joy and protection their dog gave to them to the larger community,” explains Albanese. “[The dog] watches over gay people.”

While the larger culture, particularly in major urban areas, moves towards greater acceptance, the idea that the gay community still needs protection remains relevant. “The queer experience of the street is different” than that of straight males who typically dominate street art, says urban planning professor at Cal State Northridge Brettany Shannon. She points to the disproportionate number of LGBT youth who become homeless due to family rejection and abuse. According to the Williams Institute at UCLA School of Law, 40 percent of all homeless youth identify as LGBTQ+.

When Albanese set out to document queer street art, he wasn’t sure how many queer-identifying street artists there were creating work that confronted the LGBTQ+ experience. He’s now up to 140 in his database. And a global network is beginning to form, thanks to technology and social media that allows the artists to share their work. “They’re generally creating work in isolation, particularly as a queer artist,” says Albanese. “They’re usually excited and moved to find others like them doing [street art].”

While queer street artists are working in multiple mediums, in a wide array of styles and subjects, Albanese finds value in the very existence of their work, regardless of how ephemeral it may be. Given the way queer people have had to hide their sexuality, and create coded language to create communities, and battle prejudice, discrimination, and homophobic policy, there is solace to be found in the work of these artists. Albanese explains: “All expressions of queer existence is a revolutionary act by default.”

RELATED: WeHo Has Strong Feelings About a Rotating Moose Returning to the Sunset Strip