Home LGBTQ How the Boulet Brothers Made Space for Freaky, Femme Energy in L.A.’s... 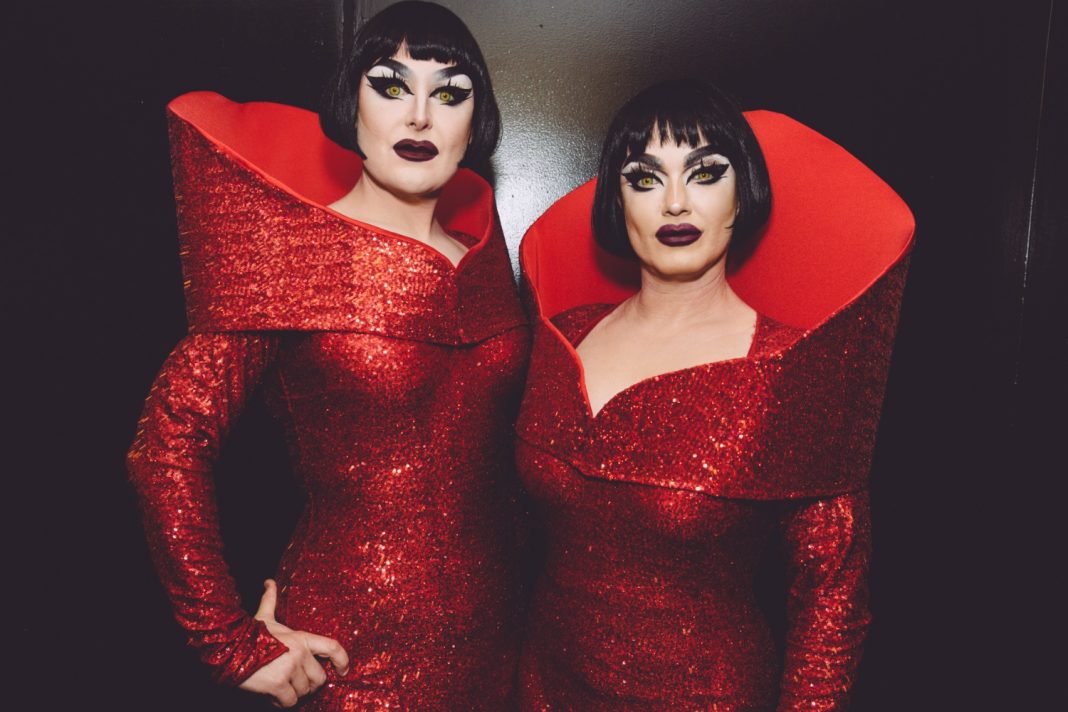 On Friday, wearing identical spectral pink gowns, pale pink wigs, and pupil-concealing contacts, the twincestuous the Boulet Brothers presided over the final edition of Queen Kong, their weekly queer cabaret hosted at DTLA gay bar Precinct. The alt-drag power couple chose to end the recurring party in order to focus on the new season of their competition series, Dragula. But they also closed the book on an era that spanned the better part of two decades and provided a community for L.A.’s freakiest and geekiest party patrons.

“Going to Kong’s like attending weekly gay church,” Tito Soto, a local performance artist and Queen Kong headliner, quipped during a pre-show interview. “It’s a chance for the DTLA community to gather, party, and celebrate each other.”

Soto shared the stage with flamboyant drag queens, zoftig dancers, and a fuzzy pink gorilla, all performing for a congregation of tattooed bears, bearded nuns, harness-clad leather twunks, and revelers of all gender identities and all numbers on the Kinsey Scale.

“Queen Kong has significantly impacted queer culture in the city because it has served as a home and a sort of training grounds for a new generation of queers,” says Swanthula’s partner in crime, Dracmorda.

You could say the alt-drag revolution began in 2002 with Miss Kitty’s. First hosted at West Hollywood’s the Parlour (now Bar Lubitsch), then at Hollywood’s Dragonfly, this pansexual playground reflected the kink-positive East Village party scene the Boulets had enjoyed in New York. Reigning for nearly a decade, Miss Kitty’s crowd, described by the L.A. Times as “drag queens, goth gamines, and would-be NYC club kids of every (legal) age, size, gender, and sexual orientation,” was offered diversions that spanned from blacklight twister and strip poker to mud wrestling and pyrotechnics, all set to a (then-nascent) dirty, electro soundtrack. This hyper-sexualized hedonism offered a rare alternative to West Hollywood’s mainstream bar scene that was especially appreciated by fellow New York ex-pats, such as former nightlife personality Jonny “Gay Pimp” McGovern.

“The Boulet Brothers had that exciting New York energy that I loved from my time in nightlife,” says McGovern, who’s currently guest starring in Golden Girlz Live at Silver Lake’s Cavern Club. “And they were able to translate it into a party that encompassed all genders, gender fluidity, drag queens, go-go boys. They always had that magic about what they did.”

Even after Miss Kitty’s shuttered in 2011, the Boulets continued to bewitch L.A. nightlife with parties like Black Unicorn and Beardo Weirdo, as well as Dragula, the alt-drag competition party that inspired the titular streaming series. And just as they infused mainstream WeHo with their Gotham grit, they also transformed Silver Lake’s Tom of Finland-inspired machismo with their with a filthy glam anima.

“I think they are very responsible for expanding drag into the more alternative leather scene. I was doing parties at Faultline, and back in the day they were very anti-drag queen, very anti-female everything.”

“I think they are very responsible for expanding drag into the more alternative leather scene,” says Jeremy Lucido, a nightlife photographer who covered the Queen Kong finale. “If you went to bars, it was always man, man, man, only that. I was doing parties at Faultline, and back in the day they were very anti-drag queen, very anti-female everything. So [the Boulets] first appeared there as hosts for one of my parties. And they worked it out with the owners and got them to start Dragula.”

“That’s really what changed Faultline, and really the Eastside,” Lucido explains. “Now there’s more an inclusion of drag or the arts or femme in general. It’s fading the gender lines.”

By 2015, the Boulets continued eastward, carving a niche for LGBT nightlife in DTLA. “There were some warehouse parties here and there, but other than that nothing going on. But the cool thing about downtown, it was blank canvas,” says Andres Rigal, a fellow gay party promoter who hosts the DTLA party Summertramp.

The Boulets were pioneers, hosting the grand opening of Precinct, DTLA’s first official LGBT bar that would serve as Queen Kong’s clubhouse for the next four years. The success of Precinct led to a modest but growing queer downtown presence that expanded into watering holes such as Redline and Bar Mattachine, as well as two upcoming establishments from Rigal: a gay bar opening on 4th and Broadway, and a queer cannabis dispensary, also on Broadway.

“What they did with Queen Kong was amazing,” Rigal says. “They built a cornerstone for the community, and have been very important to DTLA. It’s sad to see them go.”

Although Queen Kong is over, the Boulet’s legacy of inclusion, innovation, and self-expression will expand beyond L.A.’s city limits via Dragula‘s national audience base.

“I can safely say the Boulet Brothers have had an incredible impact on the queer community in downtown L.A. and, honestly, across the nation,” says Ian Devolgaer, the Boulet’s stage manager. “They promote the idea that you don’t have to fit into a box. Your queer identity is what you decide. You are a creature of your own making. If you feel fabulous, you are fabulous. Do you wanna be a monster? Great! A dancing queen? Whatever you are, come to the party and be amazing.”