Home Theater Quantum Physics and Love are Super Weird and Confusing, but This Play... 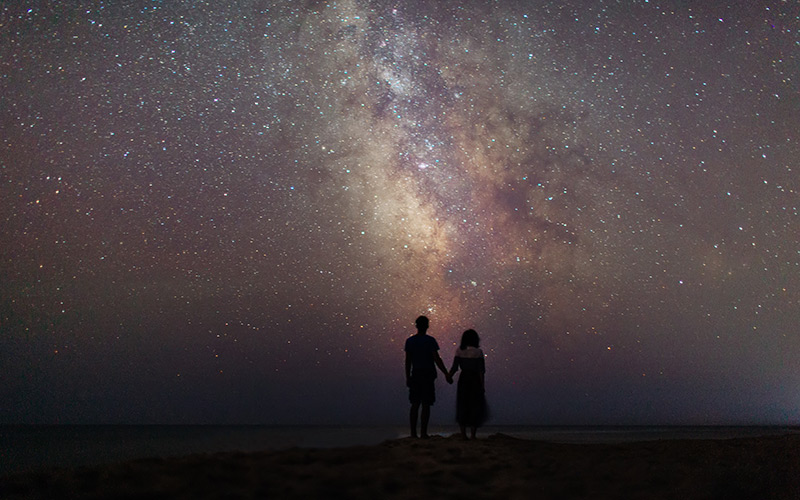 In “The Road Not Taken,” Robert Frost wrote, “Two roads diverged in a yellow wood / And sorry I could not travel both.” But what if you could travel both? What if an alternate version of you is traveling the other road right now, except you’re wearing cleaner jeans and went with cereal, not eggs, for breakfast? That mind-melting concept is the basis of Constellations, a two-character play opening June 6 at the Geffen Playhouse.

Playwright Nick Payne conceived his career-launching 2012 drama after stumbling on The Elegant Universe, a documentary by physicist Brian Greene. It turned Payne onto the Quantum Multiverse, the idea that different scenarios play out in endless parallel realities. Constellations zooms in on the infinite loop lived by beekeeper Roland (Downton Abbey ’s Allen Leech) and cosmologist Marianne (Once Upon a Time ’s Ginnifer Goodwin). Take, for instance, the pair’s introduction at a barbecue, a meeting that is repeated a few times over to various ends: In one version, Roland has a girlfriend. In another, he’s married. There’s a round in which Marianne wins him over with small talk and another when she doesn’t. Over 70 minutes, they break up and stay together, marry and divorce, cheat on and stay true to each other. The effect is engrossing, fueling daydreams about what could’ve been if only we’d taken the red pill instead of the blue. “Chance is our saving grace and our Achilles’ heel,” Payne once wrote. “We are both wildly autonomous and utterly powerless.”

Goodwin, for whom quantum physics is a pastime (really), calls the play’s structure “enrapturing.” She may be biased, but audiences were smitten when the production ran in London and, three years later, on Broadway, where Jake Gyllenhaal and Ruth Wilson (The Affair) starred. Critics felt the same, if not a little mystified; The New Yorker’s John Lahr described it as “a singular astonishment” but also admitted that he hadn’t “grasped for certain” what it means. Payne is in the same boat. “I don’t really know what its meaning is,” he says. “I’m very happy not to know and to allow audiences to take from it what they wish. I suspect it might be more about death and love, though, than it is about theoretical physics.”