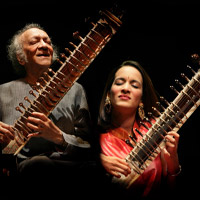 Acclaimed for bringing Eastern music to the West, Indian musician Ravi Shankar is returning to the stage – and for the first time in five years he’ll be joined by his daughter and disciple, Anoushka. It’s a reunion with special significance since the 92-year-old Encinitas resident recently had a health scare that left him in intensive care. An undisputed sitar virtuoso who taught the likes of George Harrison to play the instrument, Shankar will take the stage of the Long Beach Terrace Theater this Sunday night, November 4. But before then, we caught up with him and his wife, Sukanya Rajan, who chatted about his music, his foundation, and what inspires him.

How do you feel about being back on stage?

SR: He suffered from heart failure and pneumonia. He was in intensive care for two months so this is really a miracle.

RS: This is really a memorable time because of my condition. It’s also special to be performing in my hometown. Since 1956, I performed on my own all over the world and I’ve loved this area so much.

How do you feel about performing with your daughter?

RS: It is the ultimate pleasure. She is like an extension of myself. It’s a tremendous joy to work with her. She’s my best disciple and I’m very proud of her.

SR: She lives in England, so this is rare. It hasn’t happened since 2007. They improvise together. Even though she’s been performing with him all her life, he always surprises her. She’s always caught off-guard, it’s a challenge to accompany him.

How would you describe your style of music to new listeners?

RS: I always improvise and don’t think very much beforehand about what I’m going to play. I will be performing special ragas [melodies] I have not performed before. I love [improvising], it’s my specialty. For any new listener I would say it’s not pop or rock, but we have classical Indian music. We play melodies, ragas — there are thousands of ragas and we choose three or four of them — different talas, rhythm cycles. The listener needs to be open-minded, and I can assure them they won’t be disappointed.

What is your inspiration?

RS: I feel strongly the vibration of the people who are there, even if I don’t see them. The love and intensity gets into our music, and I feel connected. My big joy at present is my little grandson Zubin, my daughter Anoushka’s son. He’s such a joy. He’s named after Zubin Mehta, my great friend.

The concert is meant to bring awareness to the Ravi Shankar Foundation.  Could you tell us more about it?

SR: The foundation started in 1997. There is a beautiful center in Delhi, India, where upcoming musicians and dancers come to show their art. We aim to take music more into schools and introduce it to children here in the US.  We have an archive and recording studio there and we have a festival every year. The festival is about three to four days in February. We called it the George Harrison Festival after he passed away.

RS: George was a student, friend, and son. I started teaching him the sitar and he got into studying Indian philosophy and religion. We produced the concert of Bangladesh; it was the one big thing we did together.